I know a day seem too long to wait, but anticipation is half the joy and now onto Part 2! 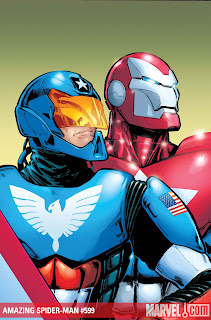 AMAZING SPIDER-MAN #599 Written by JOE KELLY Pencils by MARCO CHECHETTO AMERICAN SON CONCLUDES! It’s the ultimate battle between friend and family as Spidey’s battle against the Iron Patriot and his Dark Avengers leaves one man with a choice too painful to contemplate. Plus, with wedding plans at high-fervor, Pete’s identity stands revealed to the person who stands to be most changed by the information. 32 PGS./ $2.99
Lee: According to this hype Spiderman continues to reveal his identity. Isn’t this completely against why Mephestio did the Universal mind wipey thingey anyway??? So why did Joe Q go through all that Brand New Day stuff if we’re only going to reset the reset back to continuity that was already set.
Jim: Because now it is all new and exciting. It is totally different now, because her identity was a secret and now it may not be a secret. This is why you have to let characters grow up and move on and find a way for someone else to take over or have a 35 year old Spider-Man and tell great stories that way. After 40 plus years the history of a character weighs down on them too much. At least DC has done reboots of Superman, Batman and Wonder Woman on occasion. 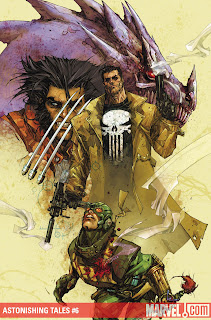 ASTONISHING TALES #6 Cover by KENNETH ROCAFORT
Lee: Ooohhhh late contender to the bloodiest cover award. The Hydra agent shot in the back with the big, bloody, bullet hole in the front has got to be a contender. Maybe this is one of the “gut shots” that was alluded to before. That’s Marvel, always thinking of new things like Cross over gut shots. So, Jim who’s the final winner? You’re call.
Jim: It is a tough call and even though they are not intestines coming out of Tony Stark, I’m going for Iron Man being the winner. 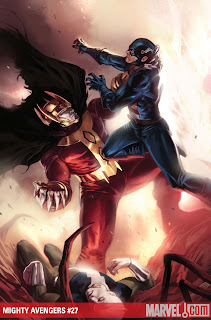 MIGHTY AVENGERS #27 Written by DAN SLOTT Pencils by KHOI PHAM Cover by MARKO DJURDJEVIC Doom, Thor, Black Bolt, Black Panther, Ka-Zar, Namor...There are many monarchs in the Marvel Universe, but only one so powerful and so reviled that he had to be written out of history. He is THE UNSPOKEN. And his return will have dire consequences on both our world and worlds beyond. 32 PGS./ $2.99
Lee: Because forcing the Sentry into the Marvel U wasn’t enough, let’s shoe horn a pointless villain in too. I understand comics don’t need a whole lot of logic but in the past five years how many new heroes/villains have we seen that have been around since the 1950’s but we just didn’t know about it? This is dumb dumb dumb.
Jim: I agree, agree, agree. A retro-con to reveal an unknown aspect about a character is one thing, but an entire history of all of these heretofore ultra powerful characters that were running around in the MU is annoying. 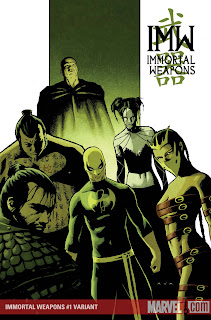 IMMORTAL WEAPONS #1 (of 5) Written by Jason Aaron & DUANE SWIERCZYNSKI Penciled by Mico Suayan & TRAVEL FOREMAN Fat Cobra! No man has fought more heartily, consumed more mightily, or lived life more fully! Fat Cobra! Master of the sumo thunder stomp and the devil’s skullcrusher! Fat Cobra! Immortal Weapon from the Seven Capital Cities of Heaven! But to this day, no man has known the story of Fat Cobra’s life…including the Cobra himself! Discover the shocking origins of this boisterous brawler and witness his decades of adventure! Meanwhile, Danny Rand embarks on his own mission of search and adventure, in a special bonus story by IMMORTAL IRON FIST writer Duane Swierczynski running through all five IMMORTAL WEAPONS issues! 40 PGS./ $3.99
Lee: OMG! A book I’m actually looking forward too. I don’t care if it’s only a mini-series. I’ll take it because Iron Fist was soooo good.
Jim: I’m agreeing again. They may have cancelled Iron Fist, but it was all to set-up this series and then whatever follows it, I can live with it. Why it could not just still be Iron Fist, I don’t know, but it will work as my Iron Fist fix. 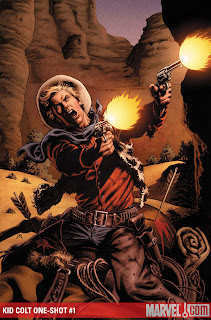 KID COLT #1 Written by TOM DEFALCO Penciled by RICK BURCHETT Cover by LUKE ROSS Framed for murder, Blaine Cole, one of Marvel’s original western heroes saddles up to ride again as KID COLT! Against a deadly bounty hunter, a corrupt Sherriff and the scavengers of the west, odds are against the Kid and his ally, the steady-shooting Everrett Hawkmoor. But that’s the way they like ‘em. By Tom DeFalco (AMAZING SPIDER-GIRL) and Rick Burchett (SHE-HULK).48 PGS./One-Shot/ $3.99
Lee: Not sure what the target market for this is. I wonder if Marvel just needs to publish an issue to they can keep the character from falling into common use space. But, between DeFalco and Burchett it should be good if you can afford a one shot.
Jim: This type of project I get a kick out of. Defalco is the king of doing retro comics and I enjoy Burchett clean line work and fluid style. As a series I would skip it as a one shot, I’m buying it.
POWERS: THE DEFINITIVE COLLECTION VOL. 3 HC Written 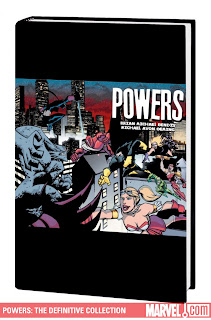 by BRIAN MICHAEL BENDIS Pencil/Cover by MICHAEL AVON OEMING Collecting POWERS #25-37. 488 PGS./ $29.99
Lee: Still the best book Bendis ever wrote and well worth the time to read. I’m really, really looking forward to this.
Jim: Not the best he ever wrote, I think Torso was his best work, but this was good until he jumped the monkey. 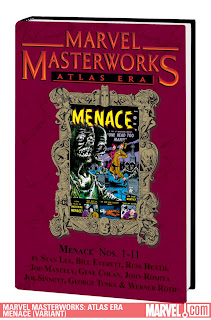 MARVEL MASTERWORKS: ATLAS ERA MENACE VOL. 1 HC Written by STAN LEE & MORE Penciled by BILL EVERETT, RUSS HEATH, JOE MANEELY, GENE COLAN, JOHN ROMITA, JOE SINNOTT, GEORGE TUSKA, WERNER ROTH, PAUL REINMAN, SHELDON MOLDOFF, JOHN FORTE, ROBERT Q. SALE, TONY DIPRETA, AL EADEH, BOB POWELL, JACK KATZ, SEYMOUR MOSKOWITZ & MORE In 1953 horror comics were king and Atlas editor-in-chief, Stan Lee, launched a new title to make a bid for the throne—and that title was MENACE! Backed by the best of the best in his art stable—Bill Everett, Russ Heath, Joe Maneely, Gene Colan, John Romita, Joe Sinnott, George Tuska—Stan’s new title became a high-water mark for pre-Code horror. Chock full of page after page of werewolves, vampires, zombies, ghosts, ghouls, double-dealing women and stone-cold killers with a sense of morality as dark as the ink on the page, MENACE lived up to its name—and how! It also showed hints of the Mighty Marvel future to come with running editorial commentary by Stan, reader contests, and characters like the infamous Zombie by Stan and Bill Everett, who would become the Marvel Age’s own killer zombie, Simon Garth. MENACE is a must-have for all aficionados of comics’ rollicking pre-Code days and the perfect entry point for readers looking to take their first adventure into the Atlas Era! Collecting MENACE #1-11304 PGS/ $59.99
Lee: I know this is expensive but this is a visual tour-de-force that shouldn’t be missed. Menace was a better than average horror comic from the 50’s with a great band of artists. And, the best part about pre-code horror is that it’s still readable to this day.
Jim: While I have a lot of this type of material I’m still getting this one. I love all the old horror stuff and pre-code it was edgier. 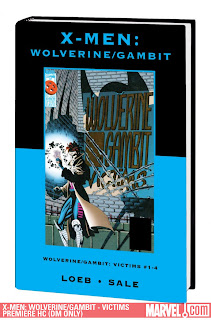 X-MEN: WOLVERINE/GAMBIT PREMIERE HC Written by JEPH LOEB Pencil/covers by TIM SALE Now, these two outlaw heroes have been drawn together by a string of brutal slayings that may mark the return of the 19th-century serial killer called Jack the Ripper! Is it merely coincidence that finds Remy and Logan in London, or does one of these enigmatic outsiders have an ulterior motive? Collecting WOLVERINE/GAMBIT: VICTIMS #1-4.112 PGS./ $19.99
Lee: I know this is only getting reprinted because of the movie but I don’t even remember this series.
Jim: Thank god, because when I saw this I did not remember it either. It must have sucked, but maybe it was when I did not hate Jeph Loeb’s work and I like Sale, still a pass.
MEPHISTO VS. PREMIERE HCWritten by AL MILGROM 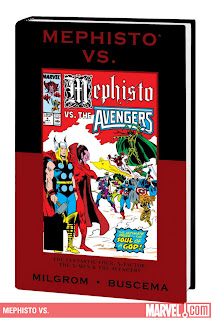 Penciled by JOHN BUSCEMA
Collecting MEPHISTO VS. THE FANTASTIC FOUR #1, MEPHISTO VS. THE X-FACTOR #2, MEPHISTO VS. THE X-MEN #3 and MEPHISTO VS. THE AVENGERS #4.112 PGS./ $19.99
Lee: Seriously, this is bad comic books people. Bad bad bad. I am surprised that Marvel continues to reprint the atrocious series from the 80’s-90’s. Between this and the Iron Captain series last month, someone is making some really bad decisions.
Jim: Or Marvel is selling this stuff to book stores. I don’t even see my store ordering this book unless some customers gets a wild hare up their ass and orders it by mistake. Trash. 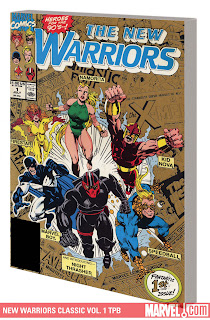 NEW WARRIORS CLASSIC VOL. 1 TPB Written by FABIAN NICIEZA, RON FRENZ & TOM DEFALCO Penciled by MARK BAGLEY & RON FRENZ Collecting NEW WARRIORS #1-6 and THOR #411-412. 208 PGS./ $24.99
Lee: I question the overuse of the word classic but this was fun, fun, fun comics. Simple, straight forward superheroes like we haven’t seen in a long time.
Jim: Classic my ass, but it was some good old time comics. I will not be revisiting this, but worthwhile if you want a solid, easy reading and fun super hero take.
Lee: Well I said that I wouldn’t pick DKR titles but I couldn’t help myself. And while DKR continues to overwhelm everything, there are still some bright spots to interest long time readers like me.
Jim: Bright spots like a canker sore. Seriously Marvel produces a ton of material but they have a lot of good stuff, just too much junk that clutters up the market.
Posted by Jim at Thursday, May 14, 2009