Who Will Be The New Batman?

DiDio expressed some surprise that nobody appeared to have worked out the identity of the new caped crusader and his trusty sidekick in “Batman and Robin,” despite it being quite obvious to him – the implication being the new dynamic duo is not Dick Grayson and Damian Wayne, as surely that is what most people have suspected. 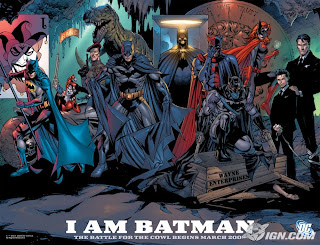 So if you look at the poster they released Damien is connected to Hush, who now looks like Bruce Wayne. If that is who becomes Batman - they have f**ked the Batverse and I will leave it as I have left Spider-Man. Maybe it will not be as much of a divorce as Spider-Man, but the reason no one has figured out who is taking over Batman (if it is not Dick Grayson) is because pulling someone like Hush out, or someone else equally inane has not even been hinted at.

If Didio thinks that the fan base will tolerate anyone but Dick Grayson as Batman he is insane. What I worry about is Didio gives the impression of being someone who wants to "fool" the readers. Well sure you can fool us when you control what we see and EVERYTHING you are showing us is Dick becoming Batman. Let's hope that he means Robin will not be Damien.

Pull the rug out from under my feet and make it Batman from Earth 2, Hush, Jason or some other stupid trick and I will feel very easy about cancelling Batman, Batman and Robin, Red Robin, Detective, Gotham Sirens, Batgirl, JLA and even more titles as this would be worse then the One More Day debacle for me.

Who will be the New Batman - Dick Grayson - or I will be saving a lot of money in the coming months.

Update : In thinking about this Didio's remarks need the context of how he said it, as if it was tongue in cheek, then he was just joking around, which makes more sense.
Posted by Jim at Monday, May 18, 2009