I find that this week had a lot of strong books which means some books that were just good did not make the Best of list. The best was dominated by Superman in a sense as Irredeemable, Life and Times of Savior 28 and The Mighty are all examinations of a god like level powered being. Irredeemable is what if he goes bad, The Mighty is what if he is both a good and bad person, Savior 28 what happens if he finds out how he is being used and we have to kill him. All are well done and all are very interesting. It is also worthwhile to note that at the same time this is happening DC has really given Superman some sold direction and providing some interesting Superman stories, so it is a good time to be a omnipotent being. 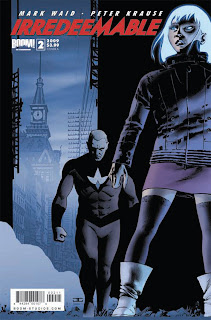 Irredeemable #2 - Writer Mark Waid, Art Peter Krause, Colors Andrew Dalhouse. This book wants me to just spout out superlatives like fantastic, great, page turner, stunning visuals, wonderful characterization, not a page or panel wasted, so I’m forced to try and find some other way to tell you 2009 best new series is at BOOM studios and it is called Irredeemable. This issue we start to peel away the onion that is the Plutonian. Like the Superman character he is an analog of, the Plutonian had a girl friend and her name was Alana Patel. One of the Paradigm (Kaidan) has found her in the ruins of Sky City (read Metropolis). Mark plays with us the whole time as the Alana / Plutonian love story is a reflection of the Superman / Lois Lane story, complete with mild mannered Dan (Plutonian) Hartigan being her co-worker. Alana is in love with the Plutonian and then after a long courtship with the Plutonian Dan one day whisks her into a storage room at work and asks her to marry him. She tells him she loves the Plutonian and Dan reveals he is the Plutonian. The comic book convention is that Alana says yes and then their lives together truly begin. Instead Alana reacts in a manner unlike any comic cliché, but in a “real” world situation seems perfectly normal, she freaks out and tells him to get away from her. In retrospect that reaction makes a lot of sense. If you have been with someone for years and the person thinks they know you and are comfortable with you and then you reveal your hidden side to them the trust that has been built up is destroyed. Trust is a fragile thing and that big of a secret could certainly dissolve any trust that was built up. Of course this is just one more thing that is sending the Plutonian down a path of becoming a villain. Mark is building on giving us a rationale that turns a man from a force for good to a force that we view as evil. See my full review here. 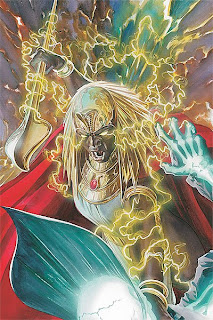 Astro City The Dark Age Book Three #1 (of 4) – Writer Kurt Busiek, Art Brent Anderson, Colors Alex Sinclair. This was another good issue in this series. It was nice to have this book back on the comic racks. Even with the super long delay it was relatively easy to fall back into the story of Charles and Royal Williams. I especially love the way Busiek uses the “normal” people of his universe to reflect what is happening with the super heroes of this Universe. Brent Anderson’s art is a perfect fit for this series and really the Astro City work has to go down as Busiek’s and Anderson’s seminal work. What is so unique about this seminal work is how long the run is lasting. Over the years this series has produced a ton of quality material. The training of the henchmen in the eighties was a nice touch as well as how the henchmen themselves recognize that the times have changed and everything is a lot more dangerous and deadlier. It makes one think that in our own society things seem to have gotten deadlier, but have they really or is it just a known fact and before we lived in ignorant bliss. Whenever I read this book it just feels like a labor of love for the creators and I have to think they each take more time then normal on this book.

Power Girl #1 – Writers Justin Gray & Jimmy Palmiotti, Art Amanda Conner, Colors Paul Mounts. I was all prepared to not like this book and make it a one and done and move on. I love the character Power Girl, but because the focus is always on her boobs I feel often the character herself is not taken seriously enough. Add into that perception the fact that Amanda Connor has a cartoon type feel to her work and I felt the book was doomed, I was pleasantly surprised. The first issue was a winner. It feels like this could be a straight forward old fashioned super hero book with strong writing. While it is on the cartoon side of a stylistic approach to art, this lighter toned book is a ray of sunshine in a dark of gloomy world, the antithesis of Irredeemable, The Mighty and The Life and Times of Savior 28. The book establishes Power Girl with a secret identity again and gives her life a purpose both as a super-hero and as a person. It is laced with humor that recognizes all the boob fixation, yet never plays into it (in the future they will have to not always play with her boobs, pun intended) so heavy handedly. The menace she has to fight is good as she has to rely on her intestinal fortitude as well as her powers and it has enough of a mystery to make us want to come back for more.

The Mighty #4 – Writer Peter Tomasi & Keith Champagne, Art Peter Snejberg, Xolors John Kalisz. It is funny that we have three different series examining a Superman type character and each doing it in their own way. All three made my best list and all three came out on the same week. I think the idea of a godlike powered being living with us mere mortals (although I’m not convinced I am mortal) is just a great concept to play with. Of the three the story of Alpha One is moving the slowest, yet it is all the creepier for its pace. This issue we see Alpha One and his new Captain of his force have dinner together with the Captain’s wife. She calls Alpha later that evening when her husband is asleep as she wants to tell Alpha to make sure he protects her husband. Alpha thought that she was going to confess her love for him and he was willing to play Lancelot to her Guinevere. At the end of this issue we see Alpha cause a major accident and fly in and basically steal a woman and flys off with her telling her so has a “grander destiny to fulfill.” Peter’s art is always top notch and he is at the top of his game with this book. The mystery of what is Alpha up to is building nicely as it is all mixed together with all the good he does and with all the stuff we don’t know he is doing.

Jersey Gods #4 – Writer Glen Brunswick, Art Dan McDaid, Colors Rachelle Rosenburg. This book exudes energy and vibrancy. How do you take the New Gods and a True Romance comic and mix it together and for four solid months make a comic that you look forward to reading every time it is on the list for a Wednesday is beyond me. The actual pitch for the project (if it was ever made to a company) would have been turned down as it must have read Patsy Walker and Orion hook up and action and hilarity ensues. Dan McDaid is a raw Jack Kirby and Darwyn Cooke put into a blender. It is not the artwork that would be in Blackest Night or Dark Avengers, hell it would not be in Titans or Dark Reign Hawkeye, but for this series Dan’s work shines as his layouts, page design and character work make every page a joy to behold. Glen’s story is so much fun that it is illegal in Maine and Oregon. Zoe’s adventures in Jersey are getting serious as she is captured by the fashion crooks while Barock and his crew are busy trying to save his world. Will Zoe and Barock ever get back together? Can young love exist with between a god and a woman (my wife thinks so)? Will Zoe be able to housebreak Barock? Will Zoe ever get credit for her column idea? Are newspapers a viable business anymore? Pick up Jersey Gods and maybe we will get some answers.

Life and Times of Savior 28 #2 – Writer J.M. DeMatteis, Art Mike Cavallaro, Colors Andrew Covalt. Again three different Superman character stories and all with different and unique viewpoints. Savior 28 is dead and this issue we have his sidekick and assassin reflecting back on Savior’s life. We find out that Savior 28 has had nervous breakdowns different times in his life and has often tried to kill himself to no avail. We find out the first breakdown was in WWII when disguised as a regular soldier and was part of a troop that liberated Buchenwald. The level of violence and death at that Nazi Concentration Camp was too much for Savior 28 to bear and he lost it and was basically catatonic for about three years. As the story unfolds we are learning about Savior 28 and why the US government (or some branch/agency) wanted him eliminated. If Savior 28 is truly dead then I believe this has to be a limited series as it will not work (IMO) as an unlimited unless he is alive.

LOEG III Century #1 1910 – I’m officially done with League, it is just too damn dense and based on material I have no familiarity with. I almost think you are lying if you say that you like Moore’s latest stuff. BLEECH!!! Cancelled.


In coming weeks I hope to give a better examination on why I cancel some title, but in reality Prototype was my just losing my interest. It may read better as a trade, but I will never know. The overall jumping up into making most books $4 a crack makes these types of calls much easier. Even though the actual book I cancel may not be a $4 title, the willingness I have to wait until a book gets better is out the window.
Posted by Jim at Tuesday, May 12, 2009