I decided this week to break up the week in review a little bit. There are two reasons, one I wanted to highlight two series that are doing some great work. Second I worry that some reviews get buried in a long “week in review” column. So that is why you are seeing a two for Tuesday set of solo reviews. At noon today (PM EDT) I have a Punishermax #13 review going up.
Batman Incorporated #6 – Writer Grant Morrison, Art Chris Burnham 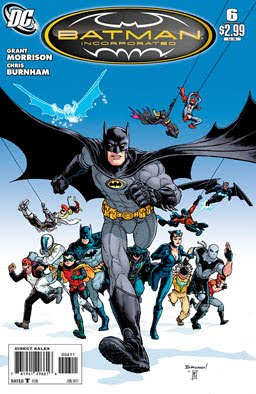 What I Liked – The art. Chris Burnham is an artist I never heard of until his first issue of Batman Inc. and I heard DC signed him to an exclusive, great move. This guy’s work is phenomenal. He has a realistic style that is not photo referenced and more akin to a John Severin or Frank Quietly feel to it. A strong artist can elevate a book and with all that Grant is doing in this issue having Chris made it even better then it would have been with a less talented artist.

The story itself was great and addresses all the problems I had with this premise. My main concern was at the pace we started at I was worried it would take forever to pull together his army of Batmen. This issue we jump around a lot and through the premise of a bad guy private eye we get updates on all the worldwide activities taken by Bruce. We also see Black Bat, which is Cassie Cain’s new identity. So many stories and plot points were moved forward in this issue it is amazing. Red Robin is given the Outsiders as a covert operative team, Dick and Damian are briefed on information about Leviathan, which we are not privy too, and are brought into another part of the plan. We also get to see more of Leviathan and his worldwide plans. We have Bruce building an organization with a huge size and scope to take down an organization which is larger and has been building for what appears to be a longer time. The name is a great one for the bad guy as Leviathan has come to be related to a extremely large monster or society itself via Thomas Hobbes renowned philosophy book, which I doubt I will ever read.
What I Didn’t Like – Nothing, a great issue.
Overall – I love this story that Grant is putting together. I also enjoy that his first act with Batman ended and yet the second act had already started. I consider the defeat of the Black Hand Act I and the building of Batman Inc versus Leviathan as Act II. If Grant is building a trilogy I’m onboard for the ride.
The Batman franchise under Grant’s influence is the most vibrant franchise in the DCU. Also he has crafted some long lasting changes with Damian, Dick as Batman, Bruce as a more open person with a goal that is now more widespread than it ever has been. While outside Bruce is the same Grant has crafted the most radical overhaul of Bruce Wayne since the seventies. Prior to O’Neil and Adams Bruce was very light and bright as the comic was trying to ape the hugely popular TV show of that era. O’Neil and Adams turned Batman back into a creature of the night and a detective. Over the years that has been the quintessential portrayal of Batman. Grant has given us a new version of Bruce Wayne. Not a total creature of the night, but a man with a vision of the future and a plan to keep that future from coming true. He is more open and honest and shows his love and appreciation for his family, but he is still a man of strength and steel and loves the shadows as much as ever.
The brilliance of Grant Morrison is taking ideas and concepts that are lying about in a series and adding in his own ideas. Never remaking the character in a way that doesn’t work, but often just reshaping and reworking a character, but giving those changes a basis for why they were made. Bruce’s epiphany occurred when Darksied “killed him” and he had to travel back though time to make it home. Therefore the changes in Bruce’s persona appear to be rationale and not just a writer imposing his will on a character to make his story work. Grant can miss at times with his work, but like the home run hitter in baseball you can forgive the three strike outs the night before after his two home runs the next night, with one being a grand slam. I know a heavy handed baseball analogy, but I’m a big Orioles fan again.

If you have skipped Batman Inc. or was unimpressed with the first few issues, time to get back onboard.
Posted by Jim at Tuesday, May 17, 2011