The Week of May 11 Review

Before I jump feel first into the reviews I will be MIA for next week as I’m going out of town for a wedding, after next week both of my daughters will be married and will get to deal with wedded bliss. On a serious note both young men are great guys and I’m happy to call them my son-in-laws. Now before we all barf with teary eyed sincerity to the comics.

A quick side note, tomorrow I have two solo reviews going up for Batman Inc. and Punishermax, my long winded reviews of those forced me to break out those as solo reviews to avoid too long of a column. 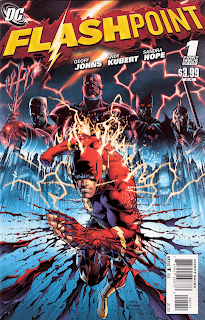 What I Liked – The art was outstanding. Kubert does a terrific job and Sandra’s inks do the work justice. DC of course puts Alex Sinclair on colors as he is the best super hero color artist in the business. The story itself was well done also. I believe you could come into this series cold and it wouldn’t have hurt you at all. If you have followed the Flash leading up to this it would have a few Easter eggs in it that made it better, but you didn’t need a thing. I liked the twist at the end of the book where we find out Thomas Wayne is Batman and Bruce was killed with his Mom in the alley. A powerless Flash and Barry falling down some stairs as he finds out he is in a new world was funny.

What I Didn’t Like – The entire DC Universe has been reset and the changes being introduced this issue in a fast and furious manner don’t make sense. The premise is that the Reverse Flash has changed time, but just changing certain events would not make someone fundamentally different and some of the changes feel so random that a specific event should not have had that outcome. Of course that is what all the mini-series are for to fill in all the blanks being left. Barry going to Bruce Wayne (who he thought was Bruce Wayne) made no sense as there has never been much of a relationship between those two and I would have thought Hal Jordan or Jay Garrick a better choice.

Overall – The book itself is another Age of “X” as the most recent example or like a host of other series that produce an alternative timeline, this one has multiple timeline changes and has radically redefined the DCU. Barry is now depowered and remembers what the world was before and I will be curious to see how he can fix everything in four more issues. In many ways this story has some many open questions wrapping it up in four issues will be tough. I hope the story is relatively self contained and doesn’t need any other books to make it work. It seems to be structured as a single story and the mini-series are just a way to tell about the new histories of familiar characters and plays into DC’s great Elseworlds tradition. Of the two big events from Marvel and DC I’m happy with this one more then Fear Itself. First off it is only five issues long and second it feels like the main story will be in just the actual Flashpoint book and therefore I can read the other stuff or not and it will not impact my enjoyment of the main story (I hope).

Yeah I know I’m back to this format with a twist, but I have determined that every book dictates what type of review and this felt right for this book. 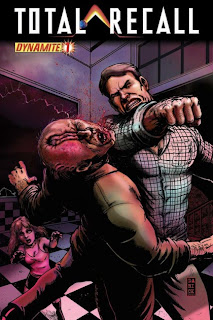 What I Liked – I enjoyed that this story is picking up immediately after the continuity of the movie and I mean immediately. We start where the movie ended. The book also did a nice job in establish the premise for the ongoing series and setting up some decent plot points.

What I Didn’t Like – The story immediately set-up the main bad guy as being the son and daughter of the former bad guy. It just didn’t make a lot of sense and also felt like they have no clue how to build our own protagonist as the bad guy so let’s keep the same one.

Overall – The art was okay and certainly did a decent job of capturing the likeness of the characters from the movie; so much so that I added my own accent while reading the Arnold character. The central core of the movie was about what is real and what is not real and that theme was certainly a central tenet of Phillip Dick’s work. The character Hauser ended up accepting the false memories and adopting the life it presented. The comic has set up some interesting themes about the original Martians, but the title of the book harkens to the idea of what is real to us when dealing with memories. It just feels like they are running away from that core idea of the movie, which is not good or bad in and of itself, just an observation. Finally the art is decent, but it always borders on just being decent. I’m amazed at how many artists are out there working but some of the work while competent and convey the story is never going to wow anyone.

I read Chew #27 this week and while it was still a good story and had tons of little fun things in it I think it was a failure. Remember the last issue was #18 and we jumped ahead nine issues. It was a total gimmick and this series does not need any gimmicks to keep me hook on the series. While gimmicks can be fun, this felt manipulative as Tony is in a hospital fighting for his life and we learn he is an ex-FDA agent, but the book focuses on his sister Antonelle (Toni). In fact her adventure and work as an NASA agent felt almost exactly like the first issue of Chew with the first bust we saw Tony on. Don’t get me wrong this is still a wonderful series and one you should be getting, heck I have the first hard cover in my collection, but I would have preferred issue #19 this month and not had to fill in the blanks once we get to #26 and then skip to #28.

Titans #35 was an interesting book and one I rarely if ever mention. Some series I get and never mention because they are decent enough for me to read and I enjoy enough but just never raise or lower the bar enough for me to mention. I think I will add a quick list of what I’m getting Wednesday to just give an idea of the number of regular titles I still read. We are at the penultimate issue of Deathstroke versus Drago an old war mate of Deathstroke. Deathstroke is blinded and dropped into a pit to face some sub human monster as we build to the conclusion of this arc. We also have Cheshire and Roy (Red Arrow/Arsenal) stories being played out within the context of this series. All in all, this book has its moments as we explore a group of bad guys and severely damaged good guys. Secret Six has a charm to it and while they are villains, they are more mercenaries, in this book the main characters are more villainous and they certainly are not friends with one another. The art is at times weak and at times strong, but all appears to be 100% computer generated meaning no inking and heavy handed coloring at times. The story itself is choppy as we have the Deathstroke “A” story, the Isis and Osiris “B” story and we added an odd “C” story with Tattoo Man. It is hard to recommend this book as a great title, but between this book, Secret Six and Thunderbolts the charm of having bad guys as the core characters is almost anything can happen. You know Batman or Captain America is not going to stab you in the back, with Deadshot, Deathstroke and Moonstone you are basically are just wondering when they will stab you in the back.

I have to mention Spawn #207, possibly the best issue since I have started to get this series with issue #201. Now I have never been a Spawn fan, but the new direction is very cool and very exciting. I’m starting to think of this as one of the better books on the stands. The art has a great noir quality to it and the story of the new Spawn is slowly taking shape. I have been able to jump into this series with no problem and I haven’t followed the series probably since issue #12 or something like that. Plus Todd McFarlane has seemed to redouble his efforts and acting as the Editor and co-plotter of the series you can see that this book is again his focus and pride and joy; even without being the main creative force. If you gave up on Spawn or never read Spawn, now is a good time to check it out again.

Well that does not wrap up this week as you have to check in tomorrow for the rest. Next week you will have to miss this column as I’m way out of town for a week and will not have read any of the books coming out Wednesday. Still I will give you a rundown of what I’m getting this Wednesday with titles only: Batman, Batman & Robin, Batman Gates of Gotham, DMZ, Fables, Hellblazer, JLA, LOSH, Outsiders, Spirit, Supergirl, Teen Titans, Thunder Agents, Zatanna, Amazing Spider-Man, Hawkeye, Hercules, Hulk Marvel Masterworks Thor (HC), Thunderbolts, X-Force, X-Men Prelude to Schism, Alpha Flight, Astonishing X-Men, Science Dog, 28 Days and Vamperilla Scarlett Legion. Damn still a long damn list.
Posted by Jim at Monday, May 16, 2011