Lee: This month Thomm joins me for Indies since Gwen is getting married. Everyone say hello to Thomm. “Hello Thomm.” According to previews, school is out so everyone stopped publishing kids books. Apparently kids don’t read in the summer. And so, this month is heavy on big boy comics.
Thomm: Lee tells me I have to play nice. We’ll see how that goes.

12-Gauge Comics
Loose Ends #1 by (W) Jason Latour (A) Chris Brunner
No one seemed to notice Sonny Gibson as he stepped back into The Hideaway, a dusty little honky-tonk nestled off the Carolina highway. But before the night was over, Sonny would be on the run. From the law, from the criminals, even from himself. Loose Ends is a gritty, slow cooked, southern crime romance that follows a winding trail down Tobacco Road, through the war torn streets of Baghdad, and into the bright lights and bloody gutters of South Florida. #1 of 4, $3.99 Visit the official site here and see some previews.
Lee: I’m always a sucker for a good crime story and this looks like a good one. It doesn’t hurt that Brunner, whose art really appeals to me, has been working in comics so I know the visual aspects of the story will be good.
Thomm: As someone who’s read quite a few James Lee Burke novels, this is very appealing. I like the cover, too. Hey, we’re off to a good start with playing nice.

Abstract Studios
Terry Moore’s Echo Complete Edition SC by (W/A/C ) Terry Moore
Julie is in the wrong place at the wrong time when an explosion in the sky rains liquid metal that sticks to her and becomes a symbiotic armor. When Julie discovers the metal is a prototype nuclear weapon, she runs rather than give it back to the army, and the chase is on! Winner of the Harvey Award for Best New Series, Terry Moore's critically acclaimed sci-fi series is available at last, from high-flying beginning to earth-shattering end - all 30 issues in one complete volume! 600 pgs. $39.99
Lee: Ahhhh, my wait is over. Everyone is talking about how good this book has been and now I can find out for myself. $40 for 30 issues is a great value for an outstanding story.
Thomm: It’s a great series. I’ve been buying the trades, so I’m not going to re-buy it here, but if you haven’t read this, it’s well worth the $40. We’re two for two on playing nice.

Rachel Rising #1 by (W/A/C) Terry Moore
Rachel wakes up at sunrise on a shallow grave in the woods and discovers the freshly murdered body in the dirt is her own. With events of the previous night a blur, Rachel seeks out her boyfriend Phillip. But Phillip has a new girl now and Rachel is beginning to suspect she rose from the grave for a reason revenge! Don't miss the Premier Issue of this haunting new series by Eisner and Harvey Award-winning creator Terry Moore! $3.99
Lee: I still kick myself for missing the boat on Echo, but fool me once as they say. I have no doubts this will be utterly fantastic.
Thomm: Not only Echo, but having read some of the early Strangers in Paradise, you won’t see me passing up on Moore’s future projects. Each one has been totally different from the last, but the quality remains high. The one consistent characteristic, aside from the quality, is a strong female lead. If this keeps up, I’m going to have to turn in my irascible license. 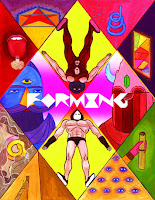 Adhouse Books
Forming HC by (W/A) Jesse Moynihan
Forming is a super-mystical epic in which Jesse Moynihan details the spawning of worlds, and the trajectory of consciousness on Earth. Volume 1 follows the trials and tribulations of primeval gods and demi-gods as they vie for control of primitive Earth's resources. 112 pgs, 12" x 9", $29.95 Visit Jesse and read the webcomic here.
Lee: This is the definition of indie comics! Great concept, street punk attitude, and demi-gods all wrapped up into one. You can read the first 3-4 web comics and have a real good idea if this is for you or not. Note the size too, this book is big.
Thomm: And we’re done with nice. I’ll toe the line to some extent and just say this ain’t for me.

Amaze Ink/Slave Labor Graphics
Malleus Maleficarum: Guide to Catching Witches GN by (W) Heinrich Kramer, Jacob Springer, Mike Rosen (A) Mike Rosen
In 1487 Heinrich Kramer and Jacob Sprenger wrote the Malleus Maleficarum, the premiere manual for exposing, capturing, prosecuting and burning witches used by every right-thinking European magistrate of the late middle ages. Cartoonist Mike Rosen's tongue-in-cheek adaptation of this uplifting tome answers all those nagging questions: Do witches kill newborn babies for use in their rituals? Can they turn men into beasts? Can they steal men's appendages, collecting them in great numbers, to hide in, say... a bird's nest up in a tree? 136 pgs. $10.95
Lee: Yeah, baby. A comic book version of the original witch hunters guide. This makes me smile just thinking about it. How can burning a witch not be fun.
Thomm: I just hope it includes the wisdom of duck/witch weight ratios.

Boom! Studios
Elric: The Balance Lost #1 by (W) Chris Roberson (A) Francesco Biagini (C) Francesco Mattina, Benjamin Carre
Afterword by Neil Gaiman! For 40 years comic fandom has thrilled to the exploits of Elric since his introduction in Marvel Comics' Conan the Barbarian in the early 1970s. Neil Gaiman called Elric's creator Michael Moorcock my model for what a writer was while Warren Ellis said he is one of the eight core sites in my creative genome. Now the godfather of the Multiverse teams up with hot New York Times bestseller Chris Roberson (Superman, iZombie, Stan Lee's Starborn) for an ongoing series that sees a crisis break out across multiple worlds with Moorcock's other two most famous fantasy franchise characters, Corum of the Scarlet Robe and Dorian Hawkmoon! The workings of Fate are being tampered across the Multiverse, upsetting the Cosmic Balance. Elric is on a quest to restore The Balance and save the Multiverse from ruin! Elric, Corum, and Hawkmoon are forced into action far and wide, but will they fight on the side of Law... or Chaos? $3.99
Lee: By the time you read this, FCBD will have come and gone. Hopefully you picked up the Elric book that was offered. If not, maybe your store still has a copy. I’ve always loved Elric so I am excited to see his continuing adventures. A perfect book for sword and sorcery buffs.
Thomm: I remember the ads for it but never read it. At this point it has a writer I like and recommendations by other writers I like, not to mention a good publisher, so it’s well worth a look. 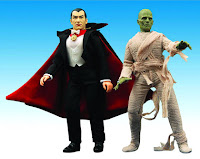 Diamond Select Toys
Universal Monsters Series 2 Retro Cloth Action Figure Set (2)
A Diamond Select Release! Emce toys design and sculpts! The best-selling retro cloth line continues its terrifying return! Fans have waited for retro cloth figures of the true Universal Monsters for over 30 years, but they only had to wait a year for the second release. Now, as part of our annual Halloween collector tradition, DST will serves up more of your favorite mon-stars!. This year's series will include the iconic Dracula, and the shambling Egyptian horror, The Mummy! Each figure stands 8 tall with over 14 points of articulation and an authentically detailed full cloth outfit. $37.98
Lee: We don’t talk about toys much but these look really cool. And, they aren’t all that expensive for 2 figures. I loves me the classic horror monsters so I can’t wait to get these.
Thomm: I can’t bring myself to channel Jim and feign interest in the toys.
Lee: That's not feigned interest in the toys by Jim. Have you seen his barbie... ummm, action figure collection. Trust me, not feigned in the least. 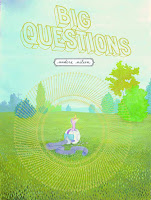 Drawn & Quarterly
Big Questions SC by (W/A) Anders Nilsen
A haunting postmodern fable, Big Questions is the magnum opus of Anders Nilsen, one of the brightest and most talented young cartoonists working today. This beautiful minimalist story, collected here for the first time, is the culmination of ten years and more than six hundred pages of work that details the metaphysical quandaries of the occupants of an endless plain, existing somewhere between a dream and a Russian steppe. A downed plane is thought to be a bird and the unexploded bomb that came from it is mistaken for a giant egg by the group of birds whose lives the story follows. The indifferent, stranded pilot is of great interest to the birds - some doggedly seek his approval, while others do quite the opposite, leading to tensions in the group. Nilsen seamlessly moves from humor to heartbreak. His distinctive, detailed line work is paired with plentiful white space and large, often frameless panels, conveying an ineffable sense of vulnerability and openness. Big Questions has roots in classic fables - the birds and snakes have more to say than their human counterparts, and there are hints of the hero's journey, but here the easy moral that closes most fables is left open and ambiguous. Rather than lending its world meaning, Nilsen's parable lets the questions wander where they will. The official site is here and contains previews of all the books that are in this collection. 7.25 x 9.25, FC, 658 pages SC $44.95, S/N HC $69.95.
Lee: This is one hhuuuuggggeeeee book that’s for sure. It’s a FC phone book of new comics. The concept sounds great and the preview is very interesting indeed. D&Q is fairly discriminating in what it publishes so I trust that this will be good.
Thomm: It’s a lot of book for the buck, that’s sure. Interesting concepts, too.