What a different a week makes. Last week I struggled to find books to talk about this week if I don’t stop after I read a few and get some thoughts out I may never finish this week’s column. Not everything is great, but plenty of “big” books and event type material. 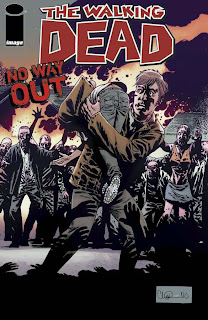 And of course with that introduction I start with Walking Dead #84, that does not fit that bill, but instead is just the next issue is a well done ongoing series. Last issue we saw Rick lose all sorts of points with me. He decided to take a small group and run away, abandoned his girl friend’s child and hacked off his girl friend’s hand to keep her from holding onto Carl. Carl got what appeared to be half his head blown off. This issue Rick gets Carl to the person they have who is their medic and goes out to hold off the herd. His fight is joined in by Michonne, Abraham and a group of others. They all get into full battle mode and hack and slash their way to safety by killing all of the walking dead who are after them. At the end we hear Rick giving a speech that he now realizes this is their home and they have to fight and rebuild it. They need to learn how to build the community right and Rick now has hope. He also hopes Carl lives to see the new world Rick wants to build as the speech was given to an unconscious Carl laying in a bed. Who by the way looks like he lost an eye and will have a slightly messed up right side of his face, but not nearly as bad as he looked last issue. My problem is that Rick has already shown what a louse he can be when the odds are stacked against him. I no longer feel like Rick has the feel of the tragic hero trying to do what is the right thing. Rick feels more like a guy I would not trust to cover my back in a fight. I’m still hanging around because I want to see what the repercussions are for Rick and if he will remain the central focus of the book, but the series has lost some of its luster. 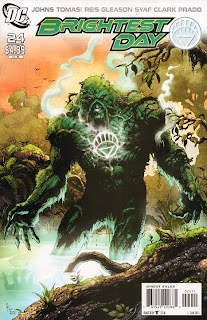 Brightest Day #24 brings to a close the exciting sage of the White Lantern. Yes Swamp Thing now inhabited by Alec Holland is the protector of life and the world. His first act as the protector of life is to kill some evil robber baron oil company executives. The new elementals are back to being human except Hawkgirl is still just wind, Firestorm is counting down to an explosion and Deadman is dead, man. The story was so artificial and did not even make comic book sense. The whys and wherefores of why the white lantern, who was an essential character in the book, did what it did were never given a comprehensive or even a partial answer. If it was not for the strong artwork on this book I think almost every fan would think it was trash. The story structure was horrible. The story beats were all done to play out the series for 26 issues that became 24 for some reason. It never simply told us the story of any of the characters. It was a showcase to try and revive interest in some characters and bring some characters back into the fold. The cruelest joke of all is bringing back Swamp Thing to do a super hero battle with its evil twin. After Swamp Thing was made into something unique he is now just a swamp monster super hero. This was the big pay, bring back Swamp Thing so he can kills the evil corporate white guys who were rolling over people for profit and greed and then show John Constantine stepping back into the DCU. Should I get chills? I thought I would vomit. This was some of the worse story telling I have seen in a long time, especially given the talent behind the series. It served no true purpose other than to bring back some characters and try to play with our emotions. Finally it left us with dangling plot lines, after 24 issues the damn thing should have had a more consistent ending. If you want tease the storyline do it with an ad for the new series coming soon or something.

The other ending was Justice League Generation Lost #24. It ended with the JLI, yep Justice League International is coming back, beating Max, but not 100%. Max will be a constant background villain I’m sure in the new series and I have to say that this series actually accomplished something. I think the mistake was trying to have a 24 issue plot that is a lot of plot for one story. The overall story did have a more definitive ending then the crap known as Brightest Day. What the book successfully did was build the characterization of the group. Except for Booster Gold, these characters are all homeless and the reintroduction and tweaking of these characters made me want to read more about them. In a regular series I would guess the plots will be shorter and therefore be a better read then this series.

I want to mention Morning Glories #9. The story itself about the two brothers was interesting and a nice twist to see that school got the wrong brother, but if I wasn’t getting this book for my one daughter who is enjoying it so much I would have dropped this title some time back. Since I have continued to get the series I find it of interest to follow because I want to see if it corrects the issues I have with it. So far it has not. It suffers from Lost disease, all mystery and no explanations. We are nine issues into the story I have no clue what is actually going on with anything and none of the characters are sticking with me. Plus I’m leery of the never explain school of writing because that means one of two things. One you have no clue and hope to figure it out later or two you have no faith that people will remain interested once you reveal your idea, which means it is a weak premise and ultimately as a reader I will be disappointed (see Lost).

A comic that not enough people are reading is Locke & Key, the current issue Keys to the Kingdom #6 of 6 was another excellent issue. The premise is that we are following the Locke children as they have accidentally been drawn into a battle with a demonic evil that inhabits the body of a young man. The various magical keys that are hidden throughout the Locke household unlock various powers and abilities. This issue the crap hits the fan and everything changes as the evil spirit makes it move and sets up the concluding two arcs. One of the things that make the story so powerful and moving is that we have an ending. Joe Hill lays out what is going on and builds to a conclusion and each chapter is more exciting than the last one. Great characterization, wonderful art by Gabriel Rodriquez make this one of the best title on the shelves.

A comic that has disappointed is Flash #11. First off Scott Kolins new art style is not to my liking. His work has less pizzazz to it and the computerized work (I’m guessing) feels static and almost amateurish at times. I feel like I’m paying for the artist to relearn his craft. Plus the whole alternative Earth Barry Allen being called “Hot Pursuit” is almost painful. I think DC has made a huge bet on this event and it better be more exciting then what we have seen lead to the event itself.

Since this column has gotten way too long we will continue with part 2 tomorrow and tomorrow has more on books I liked as I started the week with a heavy negative note.
Posted by Jim at Monday, May 02, 2011