Lee: Looking ahead, much like Image is Kirkman’s private publishing company, it appears that DH is becoming Eric Powell’s publisher. Good for DH!
Thomm: Worse things could happen. 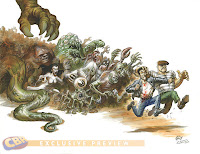 CRIMINAL MACABRE/THE GOON: WHEN FREAKS COLLIDE
Steve Niles (W), Eric Powell (W/Variant Cover), Christopher Mitten (A), Michelle Madsen (C), and Fiona Staples (Cover)
FC, 32 pages, $3.99, One-shot
Cal McDonald, the drug-fueled paranormal private dick, goes head to head with Lonely Street’s zombie-pulverizing Goon, in a weird in-between world full of monsters, horror, and humor!
Lee: Steve Niles and Eric Powell writing a horror/black humor story. Yep, I’m sold… I just wish it was cheaper.
Thomm: It’s a one shot for $4. It’s not that expensive. Not like you’re signing on for a year’s worth at that price. I can’t believe I’m telling you something’s not that expensive.

KULT #1 (of 4)
Jeremy Barlow (W), Iwan Nazif (A), Michael Atiyeh (C), and Jake Murray (Cover)
FC, 32 pages, $3.50
Kult has achieved legendary status among roleplaying gamers. Melding gnostic and kabbalistic lore with a contemporary-horror approach, the story of humanity’s escape from an illusion masking a hellish reality is a one-of-a-kind experience.The Kult series introduces this setting anew with parole officer Tomas Zenk, one of the few who can pierce the illusion. As he overcomes monsters sent to kill him, Zenk discovers the true extent of his powers, including the ability to exert control over the machinery of humanity’s enslavement. But will he aid the forces attempting to bring down the illusion . . . or succumb to the temptations of power? The legendary RPG comes to comics! A unique tale of horror and the supernatural! For fans of The Matrix and Hellraiser!
Lee: It’s interesting that more and more games are becoming comics. Just as Hollywood cannibalises comics for ideas, it appears that comics are doing the same to games. If I was a bigger gamer I might call this a must get, but since I am not, it’s more of a day in store thing. Interesting but I’m not sold yet.
Thomm: The hype calls it a one-of-a-kind experience, but it sounded like The Matrix to me, then they went and listed it as something for fans of The Matrix. Doesn’t seem very one-of-a-kind. I’ll pass.

GREEN RIVER KILLER: A TRUE DETECTIVE STORY HC
Jeff Jensen (W) and Jonathan Case (A/Cover)
b&w, 240 pages, $24.99, HC, 6" x 9"
The story of one of America’s most notorious killers is revealed in this true-crime comic unlike any other! Throughout the 1980s, the highest priority of Seattle-area police was the apprehension of the Green River Killer, the man responsible for the murders of dozens of women. In 1990, with the body count numbering at least forty-eight, the case was put in the hands of a single detective, Tom Jensen. After twenty years, when the killer was finally captured with the help of DNA technology, Jensen spent 180 days interviewing Gary Leon Ridgway in an effort to learn his most closely held secrets—an epic confrontation with evil that proved as disturbing and surreal as can be imagined.Written by Jensen’s own son, acclaimed entertainment writer Jeff Jensen, Green River Killer: A True Detective Story presents the ultimate insider's account of America's most prolific serial killer.
Lee: I can’t help myself but I have a morbid curiosity about true crime stories. The more gruesome the better! This looks to be an excellent addition to anyones true crime library.
Thomm: I like a good chase, and this appears to be not only a good chase but one based in reality. Don’t know how closely it resembles reality, but it sounds promising. But why not complain about the price for this? It’s a 2 cents per page price difference.
Lee: Because this is a fancy hc that will provide me 20-30 minutes of reading pleasure, provided it is good. The threshold of pain is based on time. $4 for less than 10 minutes is too much.
Thomm: Gouge me with an HC, not a floppy. Ok, if that works for you.

CHIMICHANGA HC
Eric Powell (W/A/Cover) and Dave Stewart (C)
FC, 104 pages, $14.99, HC, 7" x 10"
When Wrinkle’s Traveling Circus’s adorable little bearded girl trades a lock of her magic beard hair for a witch’s strange egg, she stumbles upon what could be the saving grace for her ailing freak show—the savory-named beast Chimichanga! Colored especially for this deluxe hardcover edition by Eisner Award-winning colorist Dave Stewart. Features some early concept designs and sketches from Powell.
Lee: This was originally a 3 issue miniseries published a couple of years ago under Powell’s own Exploding Albatross imprint. I don’t remember if it was any good but it’s certainly getting the deluxe treatment now. I’m sure it will be full of Powell’s signature brand of humor so it should be worth at least checking out.
Thomm: Powell’s reliable as a good read, and it’s an interesting premise. The savory beast is making me hungry, though.

Lee: Lots and lots of Powell this month. But, that’s a good thing.
Thomm: Definitely not bad. So, if DH is Powell’s imprint, why doesn’t Kirkman’s imprint get its own day instead of being lumped into the independents?
Lee: Kirkman doesn't get his own day because Image went through a phase when their solicts all sucked. It got replaced by IDW which has consistantly had better offerings for the past couple of years.
Thomm: Consistently less original stuff, in my opinion.
Posted by Lee at Wednesday, May 04, 2011