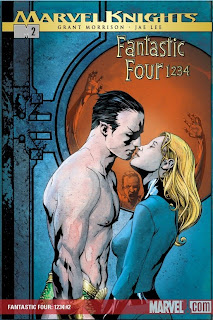 Writer Grant Morrison
Art Jae Lee
Colors Jose Villarrubia
This of course is a little late in coming as this mini-series was published in 2001 and was when Grant Morrison was working for Marvel for a short period of time. For some reason Grant seems to fit better in the DCU, but I like reading almost anything Grant writes. Of course having Jae Lee on the art and Jose Villarrubia doing color work sure as heck didn’t hurt.

Recently my friend Jeff had loaned me the documentary about Grant Morrison and I came away liking Grant a lot more. I have always considered him one of the top all time comic writers and now I would get a kick out of getting drunk with him some night and just talking bullsh*t. He is definitely a different kind of guy, but I think he is a good person at heart and like many of us has a bit of an ego.
Anyway this inspired me to go back and read some stuff of his that I missed or just never paid attention to at the time. I need to read Invisibles, but I have been re-reading a lot of Fantastic Four stuff and decided to check out Grant’s take on them. I’m glad I did. In the span of four issues Grant and Jae Lee did more with the FF then Jonathan Hickman has done in his entire run so far. People still seem to rave about Hickman and for me personally he continues to deliver some great concepts but has failed in his execution against them. Now Grant has missed on books also, but I used Hickman as a barometer with the FF as he is the current writer. 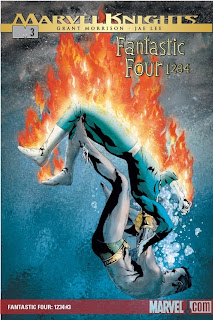 In the span of four issues we get a battle with Doctor Doom, the Sub Mariner, the Mole Man, give great character bits to each member of the FF as well as Alicia, the Thing’s girl friend. It just occurred to me as I was typing this that each of the villains used wrer the villains in the first few issues of the original FF run by Lee and Kirby, no accident I’m sure. We start with Dr. Doom playing on the Thing’s desire to be human and sending him on a journey where Ben is now human. As he did this he also planted doubt in Ben’s mind as to whether Reed or Victor is the true bad guy. Sue is sent off on a journey of wondering whether Reed really loves her and her latent desires for the Sub Mariner are manifested when Namor shows up at her door. Johnny is snuffed out and falls down an endless pit into the Mole Man’s world where the Mole Man has also captured Alicia to make her his queen. We find out Reed has been busy thinking as he realized Dr. Doom was up to something and he ultimately outplays him as Doom’s game. The chess match and reality machine all hark back to some Steranko work on Shield. Reed’s outplaying of Doom is masterful.
That summation does not do justice to all the different elements Grant brings into the story. Plus Jae Lee’s art gives Sue Richards a sexiness that she rarely exudes in most works. You can feel the underlying lust that Susan and Namor feel for each other. Bottom Line this is one of the best FF stories I have read in years. I picked it up for a song on E-Bay and it was cheaper getting all four issues then buying the trade. Highly recommended.
Posted by Jim at Friday, May 13, 2011