Detective Comics #877 – An Example of How to Make Comics Great 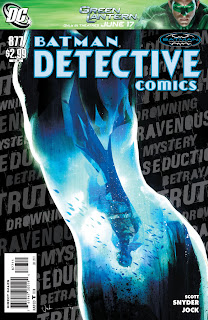 Scott Snyder is doing such a great job with Detective Comics that every issue can almost be my default best book of the week. A fair amount of it goes to the fact that right now DC has made Dick Grayson into Batman and that simple change has meant a world of difference for me. For years I have spoken about the need to make real changes to the characters and the best way to do that is to change who is under the mask.

I believe that the print comics’ medium is going to become a thing of the past. It is not that it won’t survive, because it will, but it may never be what it once was in its heyday. There are many reasons for that such as the fact that comics stayed a dime as Time, Newsweek and all were going up in price. This was why comics were isolated to the back of newsstands or the spinner racks. That led the direct market, which led to comics going even more out of the public eye. Plus in the US comics have always had the taint of being for kids no matter how much they have changed over the years. Now the printed comic is a boutique market place item that is slowly dying. Some of the signs are the constant reprinting of the same material in different formats so suckers like Lee and I will buy the same material two, three or maybe more times (I think I have not gotten the same material in four formats yet). Other signs are the joy when a comic has a sales number of 100,000 for an issue; heck the worse TV show in the nation probably gets more viewers. The digital market place and other factors also play into it. To me the one overriding factor is the soap opera nature of comics. No matter what you can come back ten years later and all the same players are still there. It is a nice safe comfortable womb that you can leave at anytime knowing when you come back all will be the same. The illusion of change is king. My hope is that declining sales, creators unwilling to bring new characters into a universe, since ownership is all important, will force companies to be daring and allow change to occur within the books. Detective is giving us a hint of what that is like.
In this issue we have Batman having an adventure. It is often subtle but Scott is writing a different Batman. Dick does not react the same way Bruce does. Dick relationships are different. A great example is when Tim Drake is giving him a hard time about being smitten with Sonia Branch. Dick states the radio is breaking up and Tim says it can’t happen with 5G and then Dick clicks off the radio. You can feel the brotherly love between the two. Dick is willing to admit that he might have made a mistake. The character can have the same adventures, it is just how the hero reacts is going to be different. We can’t assume the outcome and therefore the book becomes fresh and new.
Of course having Jock as the artist sure as heck doesn’t hurt. Jock is no slouch when it comes to the art department and I think it is great that he and Scott have teamed up for this book. Jock has beautifully designed pages. Page by page the ebbs of flows of eight panel pages, one panel pages, 3 panels, 4 panels, whatever and the flow of the story is always smooth as silk. Scott is already a master and knowing when to shut up and when to have the characters talk. Plus Scott seems to respect the characters and they never feel like they are acting out of character.
Is this the beginning of a trend? Is DC willing to let change actually happen? It would be funny if they led the way in that cycle as they had done a great job with having Wally as the Flash, Connor as Green Arrow and Kyle as Green Lantern, but overwhelming nostalgia made them recycle the worn out silver age version of those characters which led to more stagnation. Spider-Man, Iron Man, Fantastic Four are all worn out characters and concepts. Using the Ultimate Universe to try and spice things up didn’t work that well, because you still had the warm comfort of the womb in the regular MU. The companies need to be bold and daring. When someone dies, let them stay dead and move on. We can always do elseworld stories or a tale from the past, but for continuity going forward when I see a character die at the end of the book, my question should be who will replace them, not how are they going to be resurrected.
Detective Comics is showing us the way and giving this fan a fantastic series and a great read and one I’m sure I will read again and again. If it only last a year or so, I will take what I can get because I can always just drop the book if it is stagnant again. The final summation – Detective Comics is a top series and needs to be on your list.

Not so much a review as a celebration of how to make comics new and vibrant again. Maybe, just maybe I can be proven wrong and in five years sales of printed comics will be higher than now.

Also today is Memorial Day a day set aside to remember those who died in the service to our country. Take a moment to remember those who have fallen and died because regardless of our politics or whether we believe a war was right or wrong, these men and women deserved to be remembered.
Posted by Jim at Monday, May 30, 2011