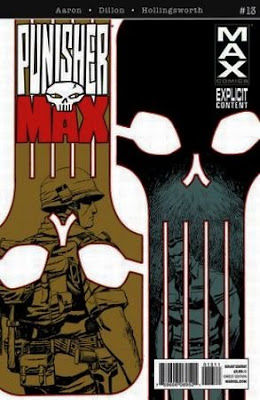 What I liked – The story is excellent. Jason Aaron is crafting what might be a seminal run on the max version of the Punisher. What is so amazing to me is he is doing it after Garth Ennis had written a seminal run on the character. This issue we see Frank being brought back into the general population. He is weak as he is still recovering from multiple injuries. Worse, his weakness is obvious and the illusion of his invincibility is now exposed. At the same time we are reliving Frank’s return from Viet Nam and the idea that his restored family life was just as much of a prison as where he is now. The art by Steve Dillon is well done as always, plus he has made a more conscious effort to portray Frank as an older man and it drives home the story.
What I Didn’t Like – The $4 price point, but for this type of quality I can live with it.
Overall – I love character studies and what Jason is doing is peeling back the layers of Frank Castle. He has taken the Garth Ennis version of the character and now is adding to him. What is so brilliant about the work is that none of it feels like it is a retro-con. In fact Garth and Jason’s version of the character is why I had some aversion at first to Remender’s Frankencastle. I felt that it took the character places he didn’t belong. I just need to get over accepting one version of the character and enjoy each story for what it is.
Jason’s examination of what makes Frank tick is a disturbing portrayal of a man who was made into a sociopath by the Viet Nam war. While the juxtaposition of jail to a suburban live style is heavy handed, I’m not sure it could be done any other way in a comic book. Perhaps the panels did not need to be side by side to make the point. Still it is inescapable that Frank saw his family as a prison. Of course having a mortgage, wife, kids and working for a living makes everyone feel like a wage slave at times and trapped in a life they made, which makes Frank’s feelings more relatable to the general reader. We can even try and make the leap that the war showed Frank who he is and that what he was doing before the war was more of what he was expected to do.
When people are younger they often follow the course that is considered what is normal. Then often some people find out they are driven by other things and life choices were made to be part of the social norm. As they get older they try to become who they are and their choices shock friends and family. The classic mid-life crisis can come at various times and is sometimes someone finally discovering themselves. Frank found out that he is good at killing and that the family he has built has no real emotional attachment for him. He is slowly coming to the realization that only violence makes him feel alive. While most likely Frank is a classic sociopath, in that he can kill without a conscious, he still has the pretense of a moral code.
I see the story is building to Frank allows his family to be gunned down and because of his pretense of moral code he allows himself to become a vigilante. This frees him to go out to kill the criminal element that took his family and expand his war from there. This is the secret of Jason Aaron’s Punisher, he kills because that is what he is and avenging his family allows him to have a level of acceptability by society. The harsh truth is Frank is only alive when he is killing. If his family had not been gunned down we are disturbed by what he might have become without that event. This allows us to view Frank in a different light. He is now more frightening than ever and at the same time you can root for him because he is killing the bad guys.
At the same time Jason is crafting a current story line that shows that age and injuries are catching up with Frank. His aura of being the biggest bad ass of all time is evaporating and prison is a dangerous place for him now. I have read that Jason has a 36 issue story line and I hope that the story ends with the death of Frank Castle as he takes out the Kingpin as that feels right and there is no obligation to not kill this version of Frank Castle.
This is an excellent series. I think Jason took a few issues to get it right, but right now this series is one of the top ten series on the stands.
Posted by Jim at Tuesday, May 17, 2011