Jim: I’m going to try and continue the different approach to the preview review this month. The idea is to talk about general trends that the previews seems to indicating and to talk about the editorial and publishing philosophies they represent. The comic book industry is in flux right now and on the surface DC looks pretty weak.
Gwen: A lot of DC’s problems seem to stem from an overload of stories bogged down with overlapping continuity. 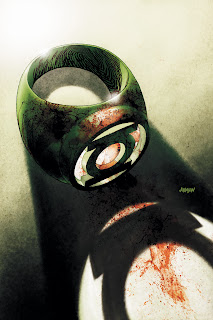 WAR OF THE GREEN LANTERNS: AFTERMATH #1
Written by TONY BEDARD
Art by MIGUEL SEPULVEDA
Cover by Dave Johnson
1:10 Variant cover by DOUG MAHNKE
The shocking consequences of the blockbuster “War of the Green Lantern” event have shattered the lives of Hal Jordan, Guy Gardner, John Stewart and Kyle Rayner in ways no one will see coming.
Everything you thought you knew about the Corps is no more!
On sale JULY 13
40 pg, 1 of 2 , FC, $3.99 US
RATED T

Jim: No matter what a solicitation says I never believe it. DC and Marvel has made me so jaded that the nothing will be the same line, means it is the illusion of change. Still I will give the War of GLs points for one thing, keeping it short. Heck the build up to the event was longer than the actual event.

My big hope is that with sales continuing to spiral downward, maybe the companies will take some changes and do something that has a real impact on their characters.

In the end this solicitation smacks more of trying to capitalize on the event but adding another series onto it.

Gwen: Eh this event hasn’t managed to generate much interest for me. I, like Jim, have become jaded by the onslaught of seemingly meaningless events. The constant promise of things changing forever has grown old. I’d rather just have the promise of a good story - every story doesn’t need to be epic and life changing. 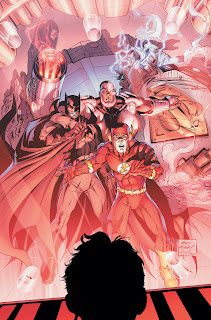 Jim: This is what passes for original ideas at DC now? Really is this what you want to pin your hopes to for a few months.

There are multiple reasons why I think this is a bad idea. Number one the series will have no impact at all to the characters who are involved in them. Every book does not affect continuity, but for the most part I like super hero comics that are leading me somewhere.

Second point the creators and the characters are not enticing me. Here and there some books have a creator’s name I will follow (Scott Snyder on Project Superman, Azzarello and Rizzo on Batman) but there are a lot of unknown names and other creators who are hit and miss for my taste.

I would have been okay with Flashpoint, the actual Flash series and maybe a few tie-in series focusing on Wally and Bart, but this looks like a lot of crap.

Gwen: Honestly the premise isn’t bad. idea. Travelling through time trying to repair a timeline could be a fun concept in a more restricted area. I think where this idea falls short is in trying to do too much at once. I think it would be a lot of fun to read if it was just in the actual Flash series. 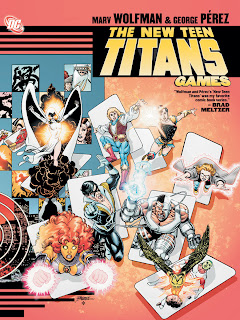 THE NEW TEEN TITANS: GAMES HC
Written by MARV WOLFMAN
Art and cover by GEORGE PEREZ
Legendary creators Marv Wolfman (CRISIS ON INFINITE EARTHS) and George Pérez (FINAL CRISIS: LEGION OF THREE WORLDS) reunite for a lost tale from their classic run on the best-selling NEW TEEN TITANS!
This original graphic novel features a mysterious villain playing a deadly game with New York City as the gameboard – and the Teen Titans as the pieces! Twenty years in the making, THE NEW TEEN TITANS: GAMES is a can’t-miss for fans new and old.
Retailers: This item is resolicited. All previous orders are cancelled.
RESOLICIT
On sale SEPTEMBER 7
144 pg, 8.125” x 10.812”, FC, $24.99 US

Jim: I love George Perez’s artwork, but I have no desire to spend $25 for a long lost story that was started 20 plus years ago. Reliving the past is often a pleasant exercise, but DC seems to feel like the past was their best times and are lost trying to make today special. Maybe they should have Grant Morrison reinvent the whole DCU as the Batman stuff is the best DC has to offer.

I understand the decision to publish this book because it is George Perez, but I think I would have invested the money I’m paying Mr. Perez to do more new material instead of going backwards.

Gwen: I love a lot of the older Teen Titan stories but I’d have to pass on this. I honestly don’t have the room for a lot of good stuff. I’d rather be a little bit pickier about what I actually pick up. I’ll stick with my Legion archives and pretty shiny Sandman books.

DC RETROACTIVE: SUPERMAN – THE ‘70S #1
Written by MARTIN PASKO
Art and cover by EDUARDO BARRETTO
DC Retroactive is an exciting event honoring the defining eras of DC’s core heroes, featuring an original story by the legendary writers and artists who helped mold the characters! Martin Pasko revisits the Metropolis of the 1970s, telling an epic lost tale as Mr. Mxyzptlk returns for another go at The Man of Steel. Will he succeed this time around?
Plus: Following the 26-page lead story is a classic tale originally published in the ’70s, also written by Martin Pasko!
ONE-SHOT
On sale JULY 27
56 pg, FC, $4.99 US
RATED T 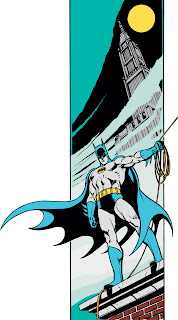 DC RETROACTIVE: BATMAN – THE ‘70S #1
Written by LEN WEIN
Art by TBD
Cover by TBD
The 1970s was a pivotal decade for Batman, one in which he transitioned from TV’s campy Caped Crusader into today’s Dark Knight Detective!
Now, legendary scribe Len Wein (DC UNIVERSE: LEGACIES) tells a never-before-revealed tale from this era in a brand-new story!
Plus: Following the 26-page lead story is a classic tale originally published in the ’70s, also written by Len Wein!
ONE-SHOT
On sale JULY 20
56 pg, FC, $4.99 US
RATED T 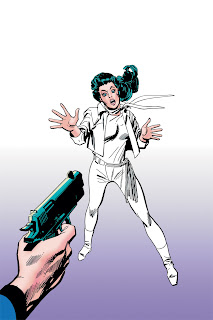 DC RETROACTIVE: WONDER WOMAN – THE ‘70S #1
Written by DENNIS O’NEIL
Art by J. BONE
Cover by TBD
From legendary scribe Dennis O’Neil comes an untold adventure starring DC’s Amazon Princess in her “white costume” phase! When Paradise Island is in danger, Wonder Woman must complete three tasks to save her homeland from destruction. But are these tasks too difficult even for her?
Plus: Following the 26-page lead story is a classic tale originally published in the ’70s, also written by Dennis O’Neil!
ONE-SHOT
On sale JULY 20
56 pg, FC, $4.99 US
RATED T

DC RETROACTIVE: GREEN LANTERN – THE ‘70S #1
Written by DENNIS O’NEIL
Art and cover by MIKE GRELL
DC Retroactive is an exciting event honoring the defining eras of DC’s core heroes, featuring an original story by the legendary writers and artists who helped mold the characters! The 1970s were a time of spacefaring thrills for the Emerald Knight! Now, writer Dennis O’Neil returns to the character for a brand-new epic starring Hal Jordan!
Plus: Following the 26-page lead story is a classic tale originally published in the ’70s, also written by Dennis O’Neil!
ONE-SHOT
On sale JULY 27
56 pg, FC, $4.99 US
RATED T

DC RETROACTIVE: THE FLASH – THE ‘70S #1
Written by CARY BATES
Art by TBD
Cover by TBD
In a new tale from classic 1970s writer Cary Bates, Gorilla Grodd unleashes his most ruthless attack yet against his nemesis, The Flash – a plan for revenge so warped and diabolical, it dooms The Scarlet Speedster to a slow and agonizing fate that will end his heroic career and cause an unspeakable rift between Barry and his wife, Iris!
Plus: Following the 26-page lead story is a classic tale originally published in the ’70s, also written by Cary Bates!
ONE-SHOT
On sale JULY 20
56 pg, FC, $4.99 US
RATED T

DC RETROACTIVE: JUSTICE LEAGUE OF AMERICA – THE ‘70S #1
Written by CARY BATES
Art by TBD
Cover by TBD
Writer Cary Bates reveals the untold story of how super villain Kanjar Ro nearly destroyed life as we know it when he set out to conquer Earth – Earth- Prime, that is. It’s up to the Justice League, Adam Strange and a very special DC legend to save the 1970s!
Plus: Following the 26-page lead story is a classic tale originally published in the ’70s, also written by Cary Bates!
ONE-SHOT
On sale JULY 27
56 pg, FC, $4.99 US
RATED T

Jim: If ever a solicitation represented a company, these books are it.

Under Didio we lost Connor and got Ollie Queen back as Green Arrow, Hal came back as Green Lantern and Barry has come back as the Flash. Now we get old writers going back and reliving the glory days.

I will confess seeing another issue of the new “modern” Wonder Woman intrigues me as the Denny O’Neil and Mike Sekowsky stuff was stunning in its totally different take on WW back in the day. I recently re-read the trades and it did not age well and read closer to a romance book then a super hero adventure, but WW was in need of something to be changed.

Finally Len Wein writing Batman for the 70’s is a crime. Denny and Neil Adams re-defined Batman in the 70’s and we are still playing with that version of the character today.

Gwen: Hah, regardless of too much nostalgia I think it would amuse me to see the characters in the retro clothing as that was the best part of some of the older Wonder Woman books :)