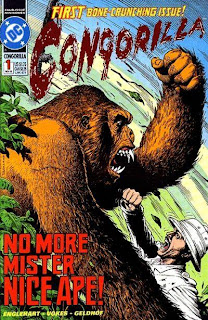 So DC killed Congorilla in 1992, a terrible tragedy and a horrible mistake. The mini-series was by Steve Englehart, Neil Vokes and Jay Geldhof. I had to laugh as Dick Giordano was the Editorial Director and Tom Peyer was the editor of this book. The amount of talent and almost more of an indie type talent line up was amazing. I can’t imagine DC having this type of line up on a book today and more is the pity.

Of course now I’m confused since Congorilla is in the JLA and he died in 1992. I’m confused as to how he come back to life. Of course, once again I’m going ape sh*t over DC and their infernal monkey business about reprints. Where is the collection of the original Congorilla material? It doesn’t have to high end, but darn it, if Dark Horse can make those Gold Key collections work, DC has tons of stuff that would be more fun than a barrel of monkeys to see published again.
The series itself was an interesting story. I’m guessing no one had used this character for nigh on twenty years and probably Englehart had a neat idea for the character and then had to sell it to DC. Today he would have made some sort of character that was close to Congorilla and done this as an Image book or something, but it worked great with the character that inspired Engelhart. 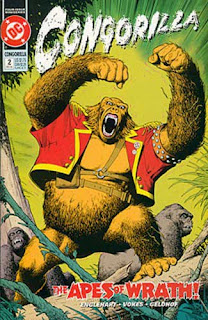 Back in the fifties and early sixties all the comic companies left had their science fiction books, war book and of course jungle adventures. Congo Bill was straight out of the stereo type that we had then as the white hunter who comes to Africa. As near as I can tell he was a decent sort and the tribal king gave Bill a ring to switch bodies with the golden gorilla and became Congorilla. Bill also had a ward with Janu and apparently raised the boy. I’m thinking all man who never married had wards back in the forties and fifties, no one has wards anymore. Later on there was some point that Bill decided to stop being a man and switched with Congorilla forever leaving his body to roam about in the jungle with a gorilla mind. How much of this is “canon” and how much Steve Englehart made up on the fly is unimportant. It is also the beauty of taking this type of character and using him, no one cares about him and probably only two or three people would know his “actual” history.
Steve then crafts a story where Janu is now a lousy drug runner and manages to switch his mind with Congorilla. Bill in Janu’s body gets mangled by the bad guys after Janu and Janu because a ruthless drug dealer running his world as Congorilla. Bill ultimately gets back into his old body, which they make a point of saying how old he is and he is the ancient age of 56, WHICH IS VERY YOUNG (I’m very close to that ancient age). Bill fights Janu to the death and kills the Congorilla body. Bill and the Africa priestess who helped him run off into the sunset.
I get the feeling it was Steve saying we should all be ourselves type of thought, but he killed Congorilla. Now people say I have an obsession with monkeys and I just say I like them. Still I have to say I was deeply offended by the cavalier nature in which the actual mind of Congorilla was treated. When first given the ring Bill was suppose to only switch places for an hour. Then Bill gets tired of his life and just takes over the Gorilla body. Nice way to treat the body that has saved you’re a@@ a thousand times. Then he lets his body that thinks it is a gorilla, roam the woods and fend on its own without being an actual gorilla. What a pal! Geez would you treat your dog or cat that way? Finally Bill kills the Congorilla body leaving, I guess, Congorilla’s mind in Janu’s body. Not very nice of Bill as he and his lady love ride off into the sunset and poor Congorilla is a young human.
Now a quick search on Congorilla’s history never reveals how he came back to life, but next up is an old Vertigo series called Congo Bill, which should be a wildly different take on the character.
It’s fun to re-read this type of stuff. Of course I had owned this and sold it long ago and now I picked it up at a sale for $5 or less and will send it to someone else again, but I think there is true beauty in sharing this material. Of course I’m sure few have the same affection for the big golden ape that I do.

PS - Whatever blog member wants this let me know as if I hear from no one I will send it out next week.
Posted by Jim at Monday, May 30, 2011