Pure Imagination Publishing
Comics on Trial Vol. 02 SC by (W) Greg Theakston
A fascinating look at the comics and the courts. The DC vs. Victor Fox suit testimony (including Will Eisners) is featured, as well at the final report of the 1954 Congressional Hearings into the Comics. Also featured are the depositions in the Kirby Estate vs. Disney/Marvel trial, including Roy Thomas, John Romita, Larry Leiber, and Stan Lee. $25.00
Lee: This is for the real die hard comic geeks out there! I read a bunch of the depositions when they were posted online and it was excellent. Never in a million years did I believe a legal deposition could be exciting but it was. Full of insight about the comic industry, how it works and the people who were in it. This is a must have for comic historians.
Thomm: Definitely for the historian rather than the aficionado. The title doesn’t match up with the content exactly. The title makes me think of government persecution but a lot of this is about internecine squabbles. Still, it’s hard to get around how the creators were stiffed when discussing comics history.

Steve Ditko: Angry Apes ‘n’ Leapin Lizards SC by (W) Steve Ditko
Steve Ditko's Angry Apes n Leapin Lizards collects the artwork produced by Steve Ditko for Charlton Comics during the time of his tenure on Amazing Spider-Man, including science-fiction and fantasy work, with guest appearances by Gorgo and Konga. Theakstonized for maximum reproduction. $25.00
Lee: If you love Ditko’s art then you will love this book. These books are oversized and contain some of the best b&w reproductions of art out there. It’s just too bad the stories are mind bendingly stupid. Yes, I have some of the originals so I know first hand how bad the stories are. But the art is pretty.
Thomm: Pretty doesn’t compensate for stupid, be it people or comics. I’ll pass.

Renegade Arts Entertainment
Shame Vol. 01: Conception GN by (W) Lovern Kindzierski (A) John Bolton
The first volume of a powerful horror trilogy from an all-star creative team! Have you ever wondered what the cost of a selfish wish might be? A good woman, Virtue, is faced with that dilemma when she finds that her child-to-be is the spawn of the demon, Slur, a demon who has heard her wish for a daughter and magicks a quickening of her womb. Virtue gives birth to Shame and imprisons her in a magickal enclosure to protect her from her father - and the world from Shame. But Shame will go to any length to escape the prison into which she was born and bring her will into the world. 64 pgs, $9.99 See previews here.
Lee: I have no idea who the writer is but I sure know who John Bolton is!!!! He’s a master of the craft and it’s obvious that he hasn’t lost his touch. This is just gorgeous to look at and I can’t wait to get my copy.
Thomm: I like this concept. Seems more like mythology than horror to me, but that’s a plus so far as I’m concerned. I wonder what the right wingers who say we’d be better off with more shame in our culture think of this one? (That would be US culture, not Lee’s shameless French culture.) 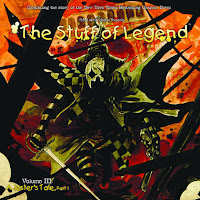 Th3rd World Studios
Stuff of Legend: Jester’s Tale #1 by (W) Mike Raicht, Brian Smith (A) Charles Paul Wilson III
Continuing the saga of the New York Times-bestselling graphic novel! Following the shocking revelations of The Stuff of Legend Volume 2: The Jungle, Jester embarks on a solo quest that will take him to the farthest corners of the Dark. High seas adventure awaits! #1 of 4 $3.99 Visit the Legends homepage with lots and lots of previews at the bottom here.
Lee: I think it’s safe to say the whole blog has been reading “Stuff of Legends” since day one. Here’s a chance to jump on the bandwagon and see what all the hub bub is about.
Thomm: I was later than the rest of our esteemed corps in getting on board with this. Having found it much more satisfying as a trade than in solo issues, I’m going to keep going that route.

Intrepid Escapegoat #1 (Curse of the Buddha's Tooth) by (W/A) Brian Smith
It is the dawn of the 20th Century, and mankind is caught between a golden age of scientific discovery and a dark era of arcane magics. One brave soul dares to walk the line between these two worlds; he is Thomas Fleet, known far and wide as The Intrepid EscapeGoat, star of the stage and screen. When EscapeGoat and his assistant Isis (a 2000 year-old mummy girl) arrive in foggy London for a performance, they are challenged to debunk an exiled Princess's claims of supernatural powers. Can they unravel the mystery surrounding The Curse of the Buddha's Tooth? The all-ages action and adventure from the Free Comic Book Day hit continues here! #1 of 3, $3.99See a 6 pg preview here.
Lee: Just because there isn’t a lot of all ages stuff doesn’t mean there isn’t any. The best offering this month appears to be the Escapegoat. There isn’t much to say other than it looks like a ton of fun.
Thomm: I was going to say something about curses and Buddha not really going together, but since it’s an all ages book, I’ll let it go. But I got nothing else.

Top Shelf Productions
Any Empire HC by (W/A) Nate Powell Nate Powell's follow-up to the Eisner winning Swallow Me Whole examines war and violence, and their trickledown effects on middle America. As a gang of small-town kids find themselves reunited in adulthood, their dark histories collide in a struggle for the future. 304 pgs, $19.95. See previews here.
Lee: If this is anything like Powell’s other book, Swallow Me Whole, then it will be fantastic. SMW, rightly so, won numerous awards and was just fantastic. Well, it was fantastic but a difficult read. Hopefully this will be slightly simplier but I have high, high hopes for it.
Thomm: I’m curious as to what a trickledown effect is from war. I’m trying not to pre-judge it based on the utter failure of the idea of trickledown economics.

Infinite Kung Fu GN by (W/A) Kagan McLeod
The Martial World is ruled by a mysterious emperor whose five armies are each headed by a cruel and highly skilled kung fu master. Lei Kung, a soldier in one of these armies, grows tired of his master's evil ways and seeks enlightenment elsewhere. However, he soon finds that he's been chosen as the one who will put an end to the emperor's tyrannical rule, personally! Allegiances are blurred, techniques are perfected, fists fly, limbs are lost and blood vessels burst in this tale of furious rivals, supernatural masters, walking corpses, and above all, raging kung fu! 464 pgs, $24.95. A 19 pg preview here and McLeod’s site here, with even more previews.
Lee: This appears to be a blend of every cheesy 70’s kung Fu, western, and horror movie mashed into one book. And I’m thrilled to see it. From the previews, it appears McLeod has been influenced by euro style page composition so there should be plenty to read. This is worth the chance.
Thomm: Kung Fu zombies? Interesting. Lots of page for the buck, too.

Vertical Inc
Tezuka’s Book of Human Insects HC by (W/A) Osamu Tezuka
The Human Metamorphosis is recognized as one of Osamu Tezuka's most cinematic titles. Reading much like a thriller, this title has more twists and turns than MW and features a timeless leading lady. 368 pgs. $21.95
Lee: Ok, I’m not really sure what this is about but it’s a single book story which is rare in Manga. It’s done by one of “godfather” of Manga, the man who created Astroboy, Tezuka. To be fair, Astroboy doesn’t mean a thing to me but the regard that Tezuka is held in certainly does. And, since I only need one book to get a complete story and sample his work… sold!
Thomm: I don’t know anything about Astroboy, either, and I’m not a Manga fan, so this isn’t in my bailiwick. The fact that the teaser doesn’t tell me anything about the plot doesn’t help, but if this is your sort of thing, it sounds like an easy decision to buy.

Lee: Thomm did a great job filling in for Gwen this month. A huge thanks to him for helping. Even if he did grous about having to play nice. Lots of good books this month... now go order one from your local store!
Thomm: I played nice and didn’t suffer an aneurism. Don’t get the idea that this will make for a long term trend, though.
Posted by Lee at Wednesday, May 25, 2011