Lee: I must be getting better at mastering my nastiness because I found a bunch of stuff to be interested in again. Not all of it, please there were still a couple of really stupid covers, but there is some good stuff in here too.
Greg: Heavens to Betsy. If this keeps up I may get the vapors.

GHOST RIDER #1
Written by Rob Williams Penciled by Matthew Clark
Cover by Adam Kubert Variant Cover by Neal Adams
Wraparound Variant Cover by Arturo Lozzi
Blank Variant Cover also available
Fear Itself Tie-In. In The Wake Of “Fear Itself”, The Spirit Of Vengeance Gets A New Lease On Death! The hottest, most rocking thing on two wheels returns! Start pumping your fists and banging your head for Ghost Rider # 1, by writer Rob Williams and featuring the long-awaited return of superstar artist Matt Clark. Witness the violent birth of the all-new Ghost Rider…come to cleanse the earth in a firestorm of Blood, Oil, and Vengeance! Johnny Blaze has been chained to Hell long enough. With the world thrown into chaos in the events of Fear Itself he is given a chance to rid himself of the Spirit of Vengeance forever…and he takes it. The curse is passed onto a new host but Blaze has no idea what nightmares his action has wrought upon the world. Will the new Spirit of Vengeance bring us salvation...or send this world of sinners to a flaming death? 40 PGS./ $3.99
Lee: Against my better judgement I am interested in this. It seems like every time GR gets relaunched it's for for 6 or 12 issues before crashing and burning again. But those first issues are great. I'm betting this is worth the initial investment. 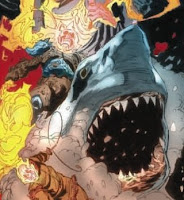 Greg: I dunno. I mean I never thought I'd like a Ghost Rider book, but Jason Aaron proved me wrong. Can Marvel make it 2 for 2? And more importantly, will it feature the return of Shark Rider? I can only hope.

Lee: Sadly, I thought Greg was making Shark Rider up... until he sent that picture. If anyone has an Aaron Ghost Rider Omni they want to let me borrow... or give to me... or sell to me... I think I need to read me some Shark Rider.

NEW AVENGERS #14
Written by Brian Michael Bendis
Pencils & Cover by Mike Deodato
Fear Itself Tie-In. It won't take some of the Avengers to fight the madness of Fear Itself it will take All Of Them!! The New Avengers and Avengers join forces in the face of true fear! And who will join the New Avengers for the first time EVER? Stay tuned, True Believer! This is a can't-miss Avengers event! 32 PGS./ $3.99
Lee: SO, according to the hype someone will join the Avengers for the first time ever! Is there anyone left who hasn’t been an Avenger? Squirrel Girl, perhaps? Nope, she was Great Lakes Avengers. I think it’s a new character.
Greg: I always enjoy it when they shake up the Avengers line up. One of the beauties of the Avengers book is that you don't NEED the heavy hitters in there. Fingers crossed its Shark Rider!

BLACK PANTHER: THE MAN WITHOUT FEAR #521
Written by David Liss
Penciled by Francesco Francavilla Cover by Patrick Zircher
Fear Itself Tie-In. You've read about it, and may have even argued about it...but here it is: The debut of the American Panther! What does his arrival mean to Hell's Kitchen? 32 PGS./ $2.99
Lee: Ummm, doesn’t the concept of an American Panther pretty much contradict the idea of the Black Panther character? And, to harp on my usual topics… since when was carrying a gun necessary to be a hero?
Greg: Since the Tea Party, that's when! USA! USA! USA! Ahem... Anyway, I think the idea that this clearly contradicts the concept of the Black Panther is the point of the story. Besides, Black Panther can't be an American superhero. He was born in Wakanda! WHERE'S THE BIRTH CERTIFICATE?!

AVENGERS #15
Written by Brian Michael Bendis
Art by Chris Bachalo Cover by Alan Davis
Fear Itself Tie-In. It won't take some of the Avengers to fight the madness of fear itself it will take All Of Them!! It’s an Avengers reunion in the ruined streets of New York as Avengers old and new gather to fight the fight no single hero could possibly withstand. And finally, who on the Avengers will fall in love...for the very first time?! What? We can't believe it either! 32 PGS./ $3.99
Lee: Wwwwaaaaiiiittttt a minute. I think I read this hype somewhere before! It took all the New Avengers to fight the fear two books ago. And now it’s taking all the old farty Avengers here to fight the fear. But, unlike the other book instead of getting a first time Avenger we’re getting first love. Awww how cute.
Greg: I really hope that the Red Hulk falls in love. Hopefully with Shark Rider.

DISNEY • MUPPETS PRESENTS: MEET THE MUPPETS
Written and Penciled and Cover by Roger Langridge
The Muppet Show is out to corrupt a new medium as all your favorite Muppets return in this giant comic! Kermit, Miss Piggy, Fozzy, Gonzo and the gang revive their variety show and bring back favorite sketches like “Pigs in Space” and “Veterinarian’s Hospital!” Kermit misses the swamp, and the gang tries to cheer him up. Fozzy revamps his standup act, but everything he tries gets the same boos as his original routine. Scooter attempts to figure out once and for all what species Gonzo belongs to. And a psychic tells Miss Piggy she’s going to lose something green. 96 PGS./ $5.99
Lee: If you missed this when Boom! published it then shame on you. It’s great material that will have you laughing out loud. A great comic for even the most cynical… yes Thomm, I’m talking about you.
Greg: Its no Shark Rider, but this book is supposed to be amazing. Between this and Thor the Mighty Avenger, Langridge is having a very good year. Hopefully Marvel will stick him on a book and not cancel it at some point.

CAPTAIN AMERICA #1
Written by Ed Brubaker
Pencils & Cover by Steve Mcniven
Variant Covers by Olivier Coipel, John Romita Sr., Neal Adams
Movie & Blank Variant Covers also available
Bestselling Cap writer Ed Brubaker and superstar artist Steve McNiven bring you the next huge chapter in Steve Rogers life, and it's a perfect jumping-on point for fans of the Cap movie. A funeral for a fallen friend turns into a race against time as the original Captain America makes his explosive return! 32 PGS./ $3.99
Lee: I am sure this book will be fine but it illustrates yet another problem with the industry. First, death no longer has meaning because characters come back within 2 weeks and there isn’t any impact. Now, first issues have no relevance because there will be a new one right around the corner. How many times has Cap, Thor, & Iron Man been relauched since the year 2000? It used to mean something when I had 200 consecutive issues of Captain America (still do in fact). It meant that I had over 10 yrs of continuous story and issues. It was a goal. It meant something. These days if I collect 4 issues of anything then I have the entire series.
Greg: Yes, yes, Lee. We'll get off your lawn in a minute. Putting aside the concerns of anal retentive collectors, it is annoying that the numbering keeps changing, but this is the next part of Brubaker's 8 year run on Cap. How's that for consistency grandpa?