Continuing my excoriation of DC, you only hurt the one you love…………………… 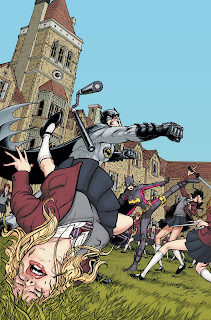 BATMAN INCORPORATED #9
Written by GRANT MORRISON
Art and cover by CAMERON STEWART
1:25 Variant cover by CAMERON STEWART
Is an exclusive girls’ finishing school a secret training ground for teenaged assassins? Find out the truth as Batgirl undertakes her most dangerous
mission yet at the request of Batman.
On sale JULY 20
32 pg, FC, $2.99 US
RATED T

Jim: So at least we get to see why Batman wanted Stephanie to go to a finishing school. I wish that Grant was running more of the DCU or at least was working more in concert with the other writers like he did on 52. I think Grant is an idea guy. Sometime his execution leaves a little to be desired, but I rather read a bad Grant Morrison book then some other writer’s best work.

I know Gwen is not a big of fan of Grant as I am, but when you started looking at how much work he has produced it is amazing.

I’m happy to see that this title has been getting other artist because Yannick was not cutting it for me and the death of any new story is a slow publishing schedule.

Gwen: Yes, well, I can’t say I’m wowed by Grant Morrison’s ideas when this one is that an exclusive finishing school for girls is actually a training ground for assassins. I mean, it seems like a fun premise for a comedy but I can’t taake this seriously. 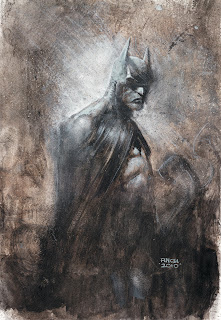 BATMAN: THE DARK KNIGHT #4
Written by DAVID FINCH
Art by JAY FABOK
Cover by DAVID FINCH
1:25 Variant cover by ANDY CLARKE
Now featuring art by rising star Jay Fabok (Soulfire)!
Etrigan the Demon’s loyalties are stretched to their breaking point, and when he chooses sides, an epic battle ensues with Batman! The victor can only be decided with the help of a new friend, but there’s no time to spare for infighting, because Gotham City is being overrun by a demon horde…
RESOLICIT
On sale JULY 27
32 pg, FC, $2.99 US

BATMAN #712
Written by TONY S. DANIEL
Art by STEVE SCOTT and RYAN WINN
Cover by TONY S. DANIEL
Batman uses both his wits and brute force to deal with new and old enemies alike. Will Two-Face find his coin? Does the Riddler finally get the skeleton key to his locked memories? Is there a new power hierarchy about to reign in Gotham City? Find out in the stunning conclusion of the 3-part “Pieces.”
On sale JULY 20
32 pg, FC, $2.99 US
RATED T

Jim: Both Tony Daniel and David Finch got the writing jobs based on the fact that their art was a selling point. Neither one apparently has the time to draw and actually be able to write a script. I would love to know the process these writers use. Personally if I could draw I would tell my editor my base story and how many issues it should take. I would then do a rough plot outline and then start to draw and finish with dialogue. 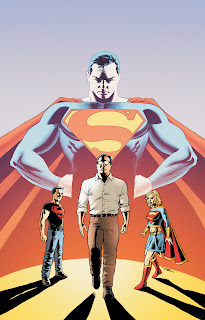 SUPERMAN #713
Written by J. MICHAEL STRACZYNSKI and CHRIS ROBERSON Art by EDDY BARROWS and J.P. MAYER
Cover by JOHN CASSADAY
1:10 Variant cover by JEFF SMITH
What could possibly make The Man of Steel decide to stop being Superman? Superboy and Supergirl catch up with him in Portland, Oregon, and they want answers!
On sale JULY 13
32 pg, FC, $2.99 US
RATED T

Jim: It is sad to see how far Superman has fallen. Ever since 52 DC has been so hit and miss on this character it is pathetic. This is the premier character in all of comics and essentially he has been under used and placed in some horrible story lines. Maybe DC is planning for the day they can no longer control the ownership of the character and are in the midst of making sure no one cares when he is no longer around.

DC needs to go out and solicit some five year plans from Morrison, Waid, Millar (yeah I’m not a fan but what the hell), Snyder and anyone else who is not exclusive and has some ideas on what to do with the character. Then go out and lock up three great artists and execute against the plan.

Gwen: The sad thing is the Grounded storyline was somewhat interesting at the beginning. I really enjoyed some of the stories and the idea of Superman rediscovering humanity was a good one - especially after all the New Krypton stuff. But then it stretched on and on and on.... and now it’s like Superman isn’t really Superman anymore. I really hope there’s a change in Superman continuity coming up soon. 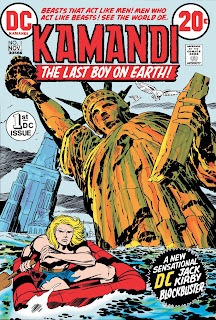 KAMANDI, THE LAST BOY ON EARTH OMNIBUS VOL. 1 HC
Written by JACK KIRBY
Art by JACK KIRBY, MIKE ROYER and D. BRUCE BERRY
Cover by JACK KIRBY and MIKE ROYER
At last, DC collects the adventures of Kamandi in the popular Omnibus format, beginning with issues #1-20!
In these tales, Kamandi – one of the few survivors of a futuristic Great Disaster that has destroyed civilization – must make his way through a world populated by bizarre, mutated animals and other strange wonders! Considered one of Jack Kirby’s most creative works, KAMANDI features a band of intelligent animal supporting characters who accompany Kamandi as he searches for answers and adventure across the wastelands of Earth.
On sale SEPTEMBER 28
448 pg, FC, $49.99 US

Jim: For the second month in a row DC is soliciting an Omnibus that they started out as an Archive collection. DC has one of the largest library of characters due to their purchases of various companies and has a seventy year publishing history and the only thing they know to republish is stuff they have already published before?

Also let’s have some truth in advertising. Yes I know what the DC omnibus format is, but not everyone does. Why can’t hardcover solicitation say the size of the book and the type of paper being used?

Finally I sure hope the heck Jack Kirby’s family and Steve Ditko (see last month) get a check for this stuff as DC and Marvel both owe a lot to these men.

Gwen: Eh, companies will always republish stuff - especially work they’ve had sell well in the past - if it’s newer and shinier someone is likely to buy it and the publishers make some more money. That’s just how it goes. Also, I’m sure some people like one format over the other regardless. 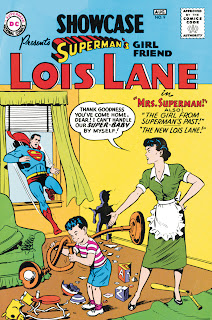 “The Girl in Superman’s Past”
“The Jilting of Superman”
“The Witch of Metropolis”
“The Rainbow Superman”
“Lois Lane – Convict!”
“The Ugly Superman”

Jim: Again a little honesty in what is being solicited would be nice. Also why is the Lois Lane stuff getting the low page count high dollar Archive treatment? I admit that I will be buying this volume because this material had a certain charm to it, but you are guaranteeing a low pre-order number going the Archive route and this material does not warrant the high end treatment.

I wish someone at DC would grant an interview to discuss their reprint policies or at least the thinking behind certain volumes. Maybe they did and I just missed it.

Gwen: Actually I think this is a pretty cool collection of some extremely dated but entertaining work. It may have a lower page count but I think this type of material is still going to garner a good amount of interest. Of course I’ll forego it and just read it off of your bookshelf :) 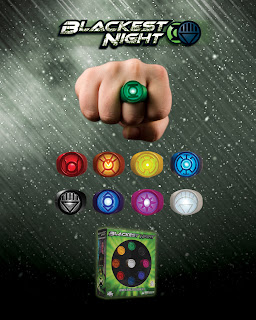 BLACKEST NIGHT POWER RING SPECTRUM SET
It’s back by popular demand…
From the pages of BLACKEST NIGHT!
Embody the entire emotional spectrum of the Blackest Night storyline with this special light-up ring set from DC Direct!
Featuring designs that are authentic to the comic, each of these nine wearable, adjustable plastic rings (one each in red, orange, yellow, green, blue, indigo and violet, plus black and white) lights up using the special key included with the set. (The batteries can also be changed).
Packaged in a 4-color window box, the rings make a beautiful display when they are not being worn.
On sale December 14, 2011 * PVC Ring Set * $65 US

Jim: At least this set is relatively cheap. Blackest Night is over; the movie will be over six months old by the time this stuff hits. I guess some lunatic thinks this will be a hot seller.

Gwen: I don’t know - I still see a bunch of people wearing the different Lantern t-shirts. Also these don’t come with the warning that you shouldn’t wear the rings AND they light up. I’m thinking Hot Topic will pick this item up and it’ll sell just fine.

Jim: Occasionally I still just need to rant and rave about some stuff. All in all I can’t see what DC’s long range plan is for their line of comics. They cancelled a bunch of lower hanging titles (Doom Patrol, Rebels and others) and now have two line of books that are event oriented (Flashpoint and Retro-Active). Outside of the bat books and Vertigo what is the DC line up?

Gwen: I will agree that DC doesn’t seem to give a lot of the series outside of bogged down continuity a chance anymore. I mean, I really liked REBELS but it went the way of Manhunter and Blue Beetle much to my despair. Mainstream comics aren’t impressing me much these days and I find myself missing fun cape books outside of mega events.
Posted by Jim at Wednesday, May 11, 2011