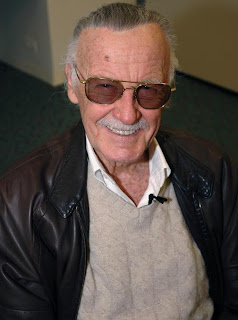 Did you hear the most exciting news of the week? Stan"The Man" Lee is going to be the guest of honor at this year's Baltimore Comic-Con! I'm super-stoked about this as I thought I'd never see him in person...EVER! I have the perfect item for him to sign too, my first-edition Marvel Masterworks No. 1, which contains signatures of various creators (including John Romita, Dan Slott, Mike Weiringo, Kurt Busiek, etc.) and some nice head-shot sketches by Erik Larsen. The problem is that I bet the line to see Stan will be tremendously long and they'll probably have to hide him in his own room somewhere, so you wouldn't even get to see him from a distance on the main floor. This year's Con will break ALL attendance records. Mark the date -- 2011 August 20-21 -- less than three months away (too soon if you ask me, but not to be missed).

Okay, that had nothing to do with today's post. Although, technically, I did recently read about it an e-mail yesterday. No, today's post is my highly sporadic version of Jim's Week-In-Review, Thomm's monthly The List, and Mrs. Gwen's Fistful. Basically, I try to talk about a lot of books -- briefly. I was going to try a countdown to the best issue, but to be honest some of the stuff is a little mixed bag and I would deliberate on it too much (and this is supposed to be the "quickie" post -- yeah, right). So, I'm going to go with that old standby -- alphabetical order.

This was a fantastic flashback within a flashback story that explains Batman's attitude and costume change from the grim-and-gritty black and gray black bat only to the blue and gray yellow-oval bat. The catalyst for the change is the Golden Age Green Lantern (who also used to operate out of Gotham City). Just like in the FCBD story, there are some great page layouts. Yeah, it's a "kiddie" book, but it's still a GREAT comic series.

Here's a mixed bag offering. These things came out almost right on top of each other, weekly or bi-weekly. I guess they're just treading water to get to issue #666. Not exactly a fill-in, but close. Spidey spends a day substitute teaching at the Avengers Academy.

Now, #661 was really funny, especially when Striker explains how Spider-Man could have still gotten paid without disclosing his secret identity back when he was a celebrity performer. It's a total burn and Peter really reacts to it, because he's being plagued with self-doubt (more than normal) by the Psycho-Man. The first part ends with all the kids chanting "Hate, Hate" with their sites set on Spidey. There's also a great eight-page backup with stellar art by Javier Pulido showing Peter going through a typical day and a To-Do list. In a bit of discontinuity, there's a panel with Psycho-Man that has NOTHING to do with the main feature. 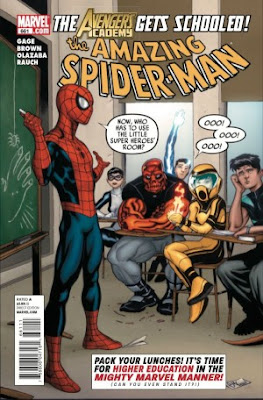 The second part of "The Substitute" in #662 was resolved fairly predictably. Reilly Brown did the penciling for both, but this installment seemed a little rushed. The two-page Infested piece is really not giving me any enthusiasm for Spider-Island. The saving grace of the book was the Magnetic Man back-up feature. Peter helps a former small time villain recently released from prison, and tempted to return to crime, by giving him a job at Horizon Labs. It did a nice job illustrating the difficulties that come with being six-years out of society. Peter's actions reminded me of things Batman has done over the years trying to rehabilitate people.

Barry Kitson draws a great Thing (he seems a little too tall though, must have been the latest mutation)! I did like the round-table dialogue concerning the other Reeds and how they treat Doctor Doom. The rest of the book...Well, let's just say I want to like this title more than I do, so no change since last time. 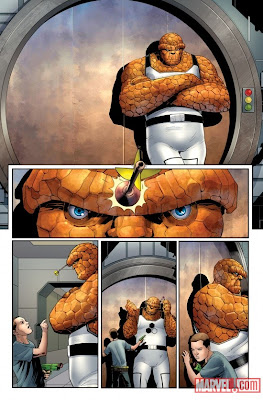 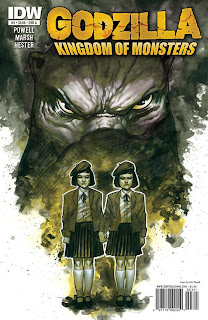 Best issue so far! We're finally starting to get some more plot and I liked all the little characterizations of the people encountering the Monsters, from red-necks to this "reality's" version of the President and Lady Ga-Ga. Especially the jubilant South Korean border patrol soldier, who says "Suck It" to his enemies, when Godzilla chooses to stomp on North Korea instead. There was a nice bait-and-switch with the full-size twin girls, making you suspect a certain friendly caterpillar-ish creature was going to emerge from the egg, when instead you got the hideous Battra. My favorite part -- a quick glimpse of the real twin miniature girls who sing "Mo-th-ra"! 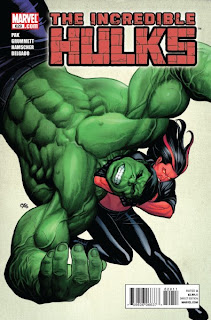 Yes, I listed those out of order on purpose. I totally missed issue 627 and ended up reading 628 first. It was a fun ride continuing from the great 626 featuring "Mann"-favorite artist, Tom Grummett. The story actually read fine skipping an issue, but I'm glad I got the whole arc (too bad Grummett's off with the next issue). Tyrannus was trying to unleash Pandora's Box, which was said to contain Hope, with the intention of making the world a better place under his rule of course. Turns out Hope alone and abandoned for ages turns sour and angry. When it's unleashed the Hulk sucks it in and swallows the force, absorbing it into his system. It was cool. What wasn't cool was Betty's reaction, which I'll paraphrase for you --" Oh, boo hoo. I can't take it anymore. Your life as the Hulk (and a hero) is too stressful for me (after nearly 50 years), I guess I'll have to become the She-Rulk forever." And She does. And she off with Tyrannus again. Just...like...at...the...beginning...of..the...ARC!!! C'mon people! I guess you could have skipped the whole thing as nothing really changed, except there's no chance for her to be Betty anymore. I still liked it though and plan on following Pak's run to it's conclusion.

WOW! What a great looking book and a promising series. Busiek and Ross together again, bringing to life some of Kirby's most...ummm, interesting creations. Seriously, this is the stuff Jack never really got much use out of, but these guys are going to mine it for all it's worth. Galactic Bounty Hunters this ain't. Kurt uses Kirby's drawing in honor of the Pioneer 10 space probe and his feelings about a select few, giving away way too much detail about mankind as the premise. The probe ends up accelerating at a phenomenal speed (Sorry Einstein) and travels to a remote part of the universe where something receives the message and then answers...explosively and creatively -- sending back a whole slew of Kirby characters to Earth. It's a kooky concept, but it's certainly Kirby-esque. We've got a few regular characters, including a star gazing boy named Kirby to help ground the series. It's only a half issue with tons of interesting back matter in the rear. Ross does the thumbnail layouts and paints some of the images, while Jack Herbert does the pencils with Neal Adams like quality. The colors by Vinicius Andrade are incredible too. Best of all the price was only $1 for this introduction. Don't Ask, Just Buy It! 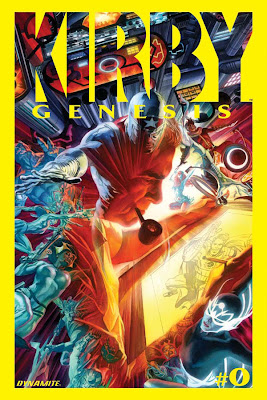 EXCELLENT -- This may well be the next buzz book!

If you read my review of issue 1, you already know how much of I love this series. The second issue is just as good. Tensions continue to mount between Ape and Human over the Lawgiver's assassination. More great characters are added and Skintown is going to be invaded by the White Troop in search of the killer...a day early! It's not going to be pretty, but it will be pretty exciting.

I had dropped the book, leaving issue 5 on the stands. It's going to be canceled after issue 8 anyway. So, I wasn't even looking out for issue 6, which I discovered a few weeks late. All but two pages were drawn by Clayton Henry and it was the closest thing to the quality of issue 1 I had seen. It was great. Spider-Girl takes down the Hobgoblin on the "cheap" versus Spidey's multi-million dollar sonic dampening suit. It's really a shame this series has had such a sporadic artist rotation, because when Henry draws it, I love it. At least 50% of issue 7 was drawn by Henry, co-starring the desperate reader grabbing Spider-Man. I guess you have to use full scripts, when you never know if the artist is going to be able to finish the whole book or not.

Well, it wasn't as bad as I thought it was going to be. I was so tempted to drop it. Like Greg, I liked the concept in ASM, but the execution in the monthly has been poor. I was interested, because of Flash Thompson, but the focus hasn't really been on him enough -- just Venom, being Venom. One more issue to go before this arc is over. I think I can hold out a little longer -- maybe. 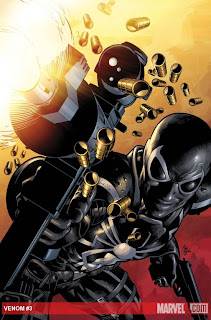 Apparently Marvel is trying take full advantage of any interest in Thor, because they're charging $3.99 for 22 pages of story. Issue 2 looked really interesting, especially since I've been catching up on the JMS HC's and the Fraction Worldtree arc from the library. But that's price gouging at it's worst!

Have a great Memorial Day weekend everybody!
Posted by Matthew at Saturday, May 28, 2011