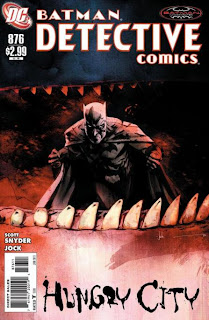 DC’s best super hero work is Detective Comics #876. Scott Snyder and Jock have delivered a damn near perfect book. From the first page to the last page this read beautifully. The words and pictures existed in perfect harmony. Like a symphony the words disappears when not needed and are there to carry the story. From the start seeing a dead Orca in the middle of a bank floor, to Dick’s using his lab to help Gordon solve what is going on, to finding a body in the whale and the steps Dick as Batman takes that leads him into a car crusher, it was brilliant. The ending was not an “oh no” the hero is dead, it was a classic Saturday matinee ending of the us wondering how will the hero escape this trap. Scott’s Batman is a detective, a gymnast, a friend to Jim Gordon as Dick Grayson and a fearless hero. We have mysteries but not a mystery as to what is the book about or what is going on, but a classic murder mystery and stuff like how did that whale get in the bank? Add into the mix the fact that the person running the bank is the daughter of the man who killed Dick’s parents and the continuing mystery of Gordon’s son and you have a book that is telling us stories while building continuity at the same time. This series has all the elements of what made older comics great with the maturity of a more sophisticated writing and artwork. 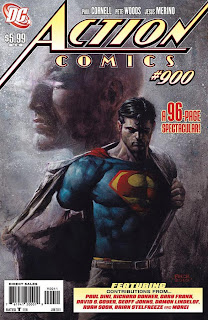 To conclude the DCU books we have Action Comics #900, which squeezed in a ton of stuff, including wrapping up the Luthor story, bringing Superman back into the fold, getting involved in the convoluted Doomsday story and adding a controversial back up story. I liked the wrap up of the Luthor story and his fall from god like powers was appropriate and illustrated the fatal flaw in Luthor. His flaw that his need for revenge and jealousy overrule any potential he may have to benefit humanity. The Doomsday stuff is pretty much standard super hero fare and is not holding my interest. The controversial back up story was by David Goyer, where he seems to be making a political statement that Superman is a worldwide hero and not just tied to America. Superman tells a US government official that he will renounce his American citizenship in order to ensure the world his actions are his own and not a statement of US positions on political situations. It all started because Superman helps a civil disobedience protest in Tehran. Now a bunch of people have been outraged, but anytime a writer tries to bring a character into the “real” world it causes problems. Also I remember Captain America having to renounce stuff because he no longer agreed with America at certain times. Elliott Maggin years ago wrote a story or two about Superman trying to solve a famine situation or something and it just never, never works. If the vast majority of writers are happier with Obama as President, then Bush or if they think the US in general is wrong about what they are doing they need to find better ways then trying to put that story into a super hero comic book. The characters are too iconic and tying them to certain politics changes the stories into something that does not work with a super hero book. The very nature of a super hero does not work in the real world. When you try to mesh the two together it never makes sense. For those who are outraged that Superman is renouncing his US citizenship think about what would you do as Superman and would you allow yourself to be dictated to by a single government. Isn’t defending truth, justice and the American way doing the right thing? Do you believe the US government always does the right thing? If you answered yes to the last question, my argument is falling on deaf ears.

Jumping back to Marvel the Age of X Chapter 6 (New Mutants #24) had a nice ending. I needed some additional explanation from more knowledgeable comic fans as I was confused that Moira was part of Legion, but otherwise I enjoyed the entire adventure. The mutants were all pulled into Legion’s created world and he fed them a full history of this new world. That world did not exist except for the mutants and now that they are back there are still repercussions as everyone has to try and remember who they really are as opposed to who they thought they were. Reminds me of some of Philip Dick’s work on memory and what makes us who we are. I’m curious to see if this is played with by writers in the future.

FF #2 was a solid issue. Doctor Doom is welcomed, by some members, to the Future Foundation and they immediately work on restoring his damaged brain. Recently I found out this happened during the Hulks fight with the Intelligentsia or whatever, but a footnote in the book would have been nice. The Thing and Sue’s reaction were great; the plot immediately thickens as we find out that Valeria has her own rather sinister motives for repairing Dr. Doom. I enjoyed the pace of the plot, but still have issues that Hickman has introduced a ton of storylines in this series and has done little to bring any of them to resolution. The final evaluation of this series lies sometime in the future, but as a single issue this one was enjoyable.

A series that continues to just be a great and Scalped #49 is another issue that proves the point. This issue Red Crow pulls Dash aside and takes him to a purification ritual thing where Dash and Red Crow come to an understanding that Red Crow can trust Dash 100%. In the same issue we see Dash tell the FBI he has Red Crow right where they want him and he just needs two weeks to wrap it up. Finally Dash has a moral decision to save Fall Downs or kill the man who killed his mother, Dash chooses the latter. Whose side is Dash really on? What does Dash’s choosing death over life mean for him? How all of this plays out? I have no clue, but I can’t wait to find out. This is a truly exceptional series.

To wrap up the week a few comments on Doctor Solar #6 and Turok #2. Jim Shooter is doing a terrific job with re-inventing these characters for a second time. My concern is that there is not enough marketing or press behind these books to generate the sales needed to make these long term viable series. I have no clue what the sales are and too lazy to research right now, but based on the buzz I read on the internet and what people at my store mention none of these series is making the radar out there. The publishing schedule seems to be around every six weeks or so which is probably hurting these books. The stories in these two series are well written and entertaining. It feels like Shooter has put a lot of work into what goes into each of these books and it shows when you give these series a close read. Doctor Solar has some fascinating science fiction concepts being played with and Turok is dealing with time travel. Both series are telling concise and well thought out stories with solid artwork that is at times outstanding work. If you haven’t checked out these books you should give them a look as it is better than at least half the stuff Marvel and DC are doing.


Well that is a wrap after a two day week in review column. The column got so long that I felt breaking in two made sense. What I really enjoyed was how many quality books came out this week; I just wish every week could be this good.
Posted by Jim at Tuesday, May 03, 2011