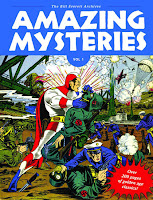 Fantagraphics Books
Amazing Mysteries: Bill Everett Archives Vol. 01 HC
Amazing Mysteries: The Bill Everett Archives is a stunning companion to 2010's critically acclaimed Fire and Water. This volume collects over 200 pages of never-before-reprinted, beautifully restored, full-color stories from one of comic books' greatest visionaries and most accomplished artists. The resulting package enhances Everett's place in history as one of the first and best comic-book creators of all time. 224 pgs / FC / 7.25 x 9.5, $39.99
Lee: Everyone knows I love old comics, so books like these are perfect for me. Everett was one of the greats to come out of the 50’s. While he never achieved the commercial success of others, he was truly an artists artist. This is well worth the investment.
Thomm: The words investment and comics should never be uttered in the same sentence. It’s nice, but not for me.

Armed Garden & Other Stories HC by (W/A) David B.
David B., the creator of the acclaimed Epileptic, gives full rein to his fascination with history, magic and gods, not to mention grand battles in this witty, literate and absorbing collection of stories - all based on historical fact, or at least historical legend, and delineated in a striking two-color format. “The Armed Garden” concerns a Prague blacksmith, Rohan, who is subject to visions of Adam and Eve urging him to lead humanity back to paradise before the fall. 112 pgs, $19.99.
Lee: If the hype reads odd, it’s because I took a summary that I found elsewhere and placed it here. It’s a cleaner explanation of what the book is about. Now then, I am coming into the game late on this one but David B., is a French comic book artist and writer, and one of the founders of L'Association. To further explain L'Association did to French comics what 60’s Marvel did to American comics. He is a master of the form and his American work has always been highly praised. Now he turns his attentions to the story of gods, magic, and man. I, for one, am sold.
Thomm: This is more my thing. I like myths and legends, minored in history, and generally enjoy historical fiction. A little religious zealotry is often entertaining, too. 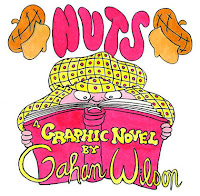 Nuts HC by (W/A) Gahan Wilson
In the 1970's, Gahan Wilson, eschewed his usual ghouls and vampires for a wry look at growing up normal in the endlessly weird real world. This new hardcover volume reprints every Nuts story from the National Lampoon, re-instituting color in some - and in one episode, 3-D. If you don't remember being a kid, this book will bring it all back.... for good or ill. 144 pgs / PC / 8 x 8 $19.99 Samples of Nuts can be seen here.
Lee: Can there ever be enough Gahan Wilson???? Nope, I don’t think so either. This collection from National Lampoon should be wonderfully sarcastic and humorous. If you’ve never enjoyed Wilson’s twisted sensibilities then you don’t know what you are missing.
Thomm: I don’t know what I’m missing. Still, National Lampoon was a lot of fun, even without Chevy Chase.

Gallery Books
Crow SC (special edition) by (W/A) James O'Barr
The graphic novel that inspired the film series! On the eve of Halloween, street thugs kill Eric Draven and his fiancee. Unable to find rest, Eric's spirit reutrns from the dead, guided by a crow, to exact revenge against the murderers of himself and his beloved. This special edition of the classic graphic novel features thirty pages of never-before-seen material and a brand-new design. ~240 pgs, $18.00
Lee: Hummm, this poses an interesting dilemma. On one hand, I am not sure that I care about the Crow anymore. On the other hand, it was a hugely successful movie, and has a legion of fans. Maybe I’ll reread the books first, they’re somewhere in my long boxes, before making a commitment.
Thomm: Unfortunately my experience of this is limited to the occasional TV show episode, which I don’t think meets up to the quality of the books or movie, based on what I’ve seen about either. It looks like something to check out on sale.

Genesis West
Potential Vol. 01: Two Percent Hero GN by (W) David Schwartz, Michael Thibodeaux (A) Michael Thibodeaux
With great power doesn't necessarily come great courage! The Potential realizes this and wants to avoid getting squished, splattered or smashed! He tries to avoid trouble, but he's made a deal to be a super hero. Will he grow comfortable with danger or will he keep trying to weasel out of his commitments? Find out! Cover by Jack Kirby! 140 pgs, $16.95 Find an 8 pg preview here.
Lee: This is about as straightforward as it is going to get this month. This looks to be a silly story poking fun at many of the superhero clichés. The preview makes fun of Spawn and provides a good idea of what you’re in for. Humor is always good.
Thomm: An easy set up for some good humor, if executed well. If not, it’s just juvenile, usually.

Humanoids Inc
John Lord Vol. 01 by (W) Denis Pierre Filippi (A) Patrick Laumond
An old-fashioned yet truly original noir tale set in 1920's New York where an unlikely pair of detectives reactivates a special investigative agency known as the UPIs to probe the grisly death of one of theirs. A pulpy tale of crime, full of snappy dialogue, twists and turns, and the unraveling mysteries of the past. $19.95 Visit Laumond French site here and see previews.
Lee: Euro style noir ! And, the incredibly beautiful artwork of Laumond. No, I’m not all that familiar with the artist, but his painted style is just fantastic from the previews. I have yet to read anything from Humanoids that hasn’t entertained me so I’m giving this a try too.
Thomm: Go, Guinea pig, go! You’re our canary in a coal mine. I don’t know how you have any money left at all, living in the heart of Euro comics like you are. Me, I can’t stop chuckling that the investigative agency has the same initials as a press syndicate.

Image Comics
Strange Girl Omnibus HC by (W) Rick Remender (A) Eric Nguyen, Jerome Opena, Nick Stakal & Peter Bergting (C) Eric Nguyen
For the first time, in one volume: Rick Remender's critically acclaimed indie hit, from start to finish! Ten years after the Rapture, a beautiful occultist and her pet demon embark on a road trip to the last open gateway to heaven, in hopes of befriending God and escaping hell on earth. A bare-knuckle, action-driven series, peppered with social commentary and dark humor, Strange Girl is a story about the bewildering nature of religion, what would happen if the dark future predicted by many came true, and what a good person would endure for not having faith in advance of it. Collects Strange Girl #1-18, 450 pgs, $59.99. Read my review of the whole series here.
Lee: I have the trades so I’m pretty sure that I don’t need a hc of the series, but it’s pretty good. It certainly is worth investigating if you haven’t given it a shot yet.
Thomm: Ah, irreverence. Now that’s for me. If it doesn’t cross over into out and out stupidity like Preacher, I could enjoy this. 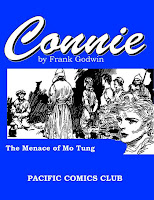 Pacific Comics Club
Connie: Menace of Mo Tung SC by (W/A) Frank Godwin
Connie goes underground in 1930s China to break up a criminal gang. Before she's through she's tangled with the Japanese Air Force, Mongolian nomads, and a cadre of anarchists determined to bring down the Soviet government! Fast paced story and especially fine artwork by Frank Godwin. 50 pgs, 14" x 8,5", $14.95 An outstanding history of Godwin here with many, many art samples.
Lee: Over the past few years I’ve really starting getting into older strips and one name that keeps cropping up is Frank Godwin. A master draftsman, his art is impeccable. Add that to a story written in the 30’s and I’m sure to get plenty of action and silly stereotypes. This should be fun.
Thomm: The stereotypes are sure to be like the ones common to that era. What’s more interesting to me is the perception of the Soviet Union at the time. Depending on the blinders of the writer, many still viewed it as a utopia in that era. ‘Course, they didn’t have to live through it.

The grand finale tomorrow... will Thomm finally lose his cool and poop all over a book???
Posted by Lee at Tuesday, May 24, 2011