Clockwork Angels: The Novel – A Review 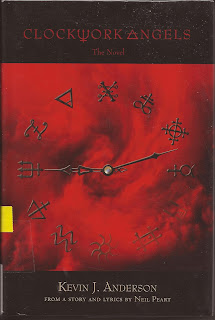 Written by Kevin J. Anderson from a Story and Lyrics by Neil Peart

It was one minute until the stroke of midnight (or close enough considering my clock radio is set 10 to 15 minutes ahead) when I finally finished Clockwork Angels last Saturday night.  I started the book in mid-May shortly after experiencing the RUSH Clockwork Angels tour at the 1st Mariner Arena in Baltimore.  During the nearly three-hour concert, the band played all but two of the 12 songs on the album.  It was FANTASTIC!!!  I wish I had been more familiar with the music prior to seeing the show, because I would’ve gotten even more out of it.  Lyrics could have really made the difference (and partially the reason why we prepared lyric slides to go with the recent ApologetiX concert at my church).  Like all music, some songs immediately resonate, but others take repeated listening until you embrace them.  It’s an excellent album and like most RUSH endeavors it’s heavy on concept and story too.


These songs are my favorite ones:

Usually I tend to associate the lead singer (Geddy Lee) with the lyrics (in ApologetiX J. Jackson is both).  But remarkably, Neil Peart, the world-renown drummer, is the lyricist for the band and has been since at least the Fly by Night days (love that album) from 1975.  It turns out that he is good friends with the world-renown SyFy author, Kevin J. Anderson.  Well, the two men got together on one of their periodic mountain climbs in Colorado to bring about the novelization of Neil’s loose story from the music.  The end result is Clockwork Angels: The Novel and while not the most important work of science fiction, I still really enjoyed it immensely.

One of the things I appreciated was the clarification of the song lyrics.  Without any reference, you see connections with your own life experiences or views in the music (and that’s often a good thing), but the character of the Watchmaker seemed to be a stand-in for God.  And I didn’t really like the way he was acting or how the main character was reacting to him.  But the Watchmaker isn’t God at all and neither is the Anarchist, the Devil.  The two characters are arch-types of extreme order and extreme chaos.   (Boy, throw in a big balance and a pasty-white, black soul-stealing sword wielding individual and you’ve got a story about another incarnation of the Eternal Champion.)

It may not be the most original story (loosely based on Voltaire’s Candide and numerous RUSH lyrics), but the tale is in the telling.  And this one goes down smooth like a combo mug of warm hot chocolate (dark) and coffee (decaf – most of the time), which is best to taste once a day, sipping it slowly.  The chapters are relatively short and are easy to digest (not like Tolkien’s 30-page paragraphs).  The central character is Owen Hardy a nearly 17-year old, apple orchard worker set to have a fine settled life of doing the same old thing contentedly.  Only Owen dreams of traveling to far off places that were told to him by his mother from a rare storybook as a child.  He questions the ordinary routine and has more spontaneity than his whole town.  When his girlfriend fails to meet him for a daring midnight rendezvous, he escapes the mundane by hitching a ride on a cold-fire fueled (alchemy) steamliner to Crown City – home of the majestic Clockwork Angels.  His wild-eyed enthusiasm comes face-to-face with often painful reality in his journeys and travails.  Worse still is that he is unknowingly being used as a pawn between the Watchmaker and the Anarchist.  Both see him as a key to furthering their causes.

Along the way Owen learns to fight, love, and steal, facing obstacles that challenge his integrity, and optimism, all of which ultimately shape his world-view.  Having the book start with Owen as a grandfather, remembering his youth and trying to spark the imagination of his grandchildren to go their own way, there isn’t much suspense in some of Owen’s escapades in terms of personal danger, but it’s an interesting journey nonetheless to see how one settles into who they are and what they believe.

The alchemical powered universe that operates under its own brand of Physics is fascinating too.  Anderson has included just enough detail to establish the suspension of disbelief and the reader can just “go with it”.  Perhaps some of the descriptive contrasts of the different countries are a bit too allegorical to familiar ideas or philosophies, but having “Our Hero” encounter them naturally keeps things from being “preachy” or biased.  In fact, nothing is viewed as wholly positive – flaws or excesses are never obscured.

Anyone who has ventured from home for any bit of time has probably experienced some of what Owen encounters.   I particularly could relate to his first encounter with true love and being unjustly accused of something when he was only trying to help.  I like a lot of the ancillary side characters (especially Commodore Pangloss) and both the Watchmaker and Anarchist are fleshed out well with a series of interlude “chapters”.

I apologize if I’m being too vague and not providing enough detail, but I want to whet your interest in the book and the album yourself.  It’s very readable and I can see myself “[living] it all again” someday, just like I can listen to the music over and over.  You don’t have to be a RUSH fan to enjoy the story though.  It may not be the most memorable book you’ve ever read, but I don’t think you’ll feel your time (“the infinite jest”) was wasted, especially if it leads you to reflect on your own life’s journey and encourages you to “tend your garden…of love and respect”.

To paraphrase Alice Cooper, “[BLOG’s] OUT FOR THE SUMMER”!  Now go out and enjoy it, by reading a good book.