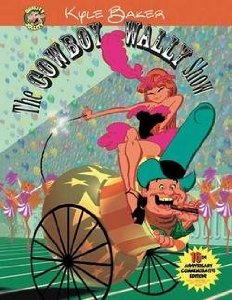 Hello, and welcome to another visit to the more obscure works I've stumbled upon.  As noted in a previous review, I started reading Kyle Baker late, finding his Nat Turner book a very engaging read.  That lead me to pick up some of his older works, including this book from 1988.  The copy I have came out in 2003, so even the much heralded "16th Anniversary Commemorative Edition (Digitally Remastered with Many of the Typos Remove!)" is 10 years old.  Yes, this is a humerous work, not at all like Nat Turner.

Of course, it's just as great as Nat Turner, in its own way.  For starters, it's a lovely thing to behold in terms of the art.  Baker has a great, light line.  Being in black and white with very little inking you see all of the line work, too.  Really, the inking is mostly used for areas that are intended to be entirely black.  Baker has a great knack for distinctive faces and body types.  None of the cut and paste superhero sort of body mold here.  The camera angle is cinema verite because the story is almost entirely an interview of the "hero" of the book, Cowboy Wally.

And what a character he is.  He's an idiot.  A very successful idiot.  He hosted a TV show for kids and a late night show, neither of which displayed an ounce of creativity or anything resembling thought.  He made a movie that's a sort of Cliff's Notes version of Hamlet, except that's insulting to Cliff's Notes.  He drinks beer constantly.  He's a mysoginist.  He's an inveterate huckster.  And he's wealthy as a result.

Baker whacks away with a sledge hammer at the inanities of Hollywood.  Of course, technology has changed a lot in the 26 years since he wrote this.  That makes for different delivery of what Hollywood produces, but still just as much stupid therein.  In fact, this pre-dates the vast wasteland that is Reality TV.  I can just imagine how much more wealth Cowboy Wally would have accumulated if Reality TV was around at the levels it is now.  It was in its infancy then.  In fact Baker is almost prescient in having Cowboy Wally be the subject of this sort of documentary.  It's just like watching one of the panoply of celebrity Reality shows we have now.  It's like watching Gary Busey but comprehensible.  Baker is just plain brilliant.  I can't recommend this highly enough if you find pop culture at all amusing.
Posted by Thomm at Wednesday, June 26, 2013