Lee: It’s one of my favorite times of the month, Image Previews! Interestingly enough Image has a ton of ongoing series right now. They used to publish all these mini’s but everything seems to have grown into extended stories. And since so few of the series are about capes and tights, it’s refreshing to look at.

Thomm: Aside from Invincible and Savage Dragon there’s not much superhero stuff, which made it all the stranger when they attempted a big cross over event. I wonder how that worked out? I dropped it after one or two issues. 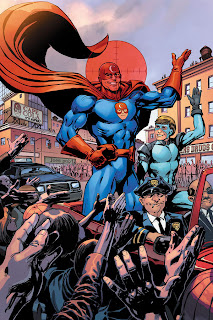 THE SIDEKICK #1
story J. Michael Straczynski
art / cover A Tom Mandrake and Brian Miller
cover B Charlie Adlard
32 pgs / FC / $2.99
Witness A Modern Hero’s Fall From Grace! The Cowl and Flyboy: renowned superhero and sidekick despite dopey names. They were famous, popular, and happy until the Cowl's assassination. Now, no one takes Flyboy seriously. Follow his trajectory from barely tolerated hero to figure of ridicule, and witness his slow descent into madness, darkness and crime.
Lee: Straczynski is on a roll these days. He is pumping out series like crazy! This sounds a lot like Veitch’s Bratpack so I expect this to be pretty bleak. Of course, Mandrake is a perfect artist for bleak which makes it even better.
Thomm: Bratpack took on a group of sidekicks while this focuses on one. Other than that, it does sound a lot alike. I’ve taken a tentative step back into reading JMS with Ten Grand. I hope he doesn’t fall back into not seeing things through to the end. 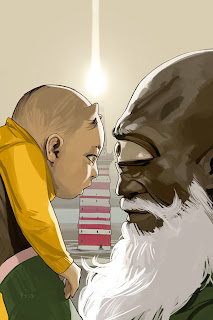 SAGA #13
story Brian K. Vaughan
art / cover Fiona Staples
32 pgs / FC / $2.99
The Smash-Hit, Critically Acclaimed Series Returns! Now that you've read the first two bestselling collections of SAGA, you're all caught up and ready to jump on the ongoing train with Chapter Thirteen, beginning an all-new monthly sci-fi/fantasy adventure, as Hazel and her parents head to the planet Quietus in search of cult romance novelist D. Oswald Heist.
Lee: The first arc of this series was great! I can’t believe Vaughan and Staples actually took a break. I am glad they did because I am sure it means the story will better for it. It sucked that we had to wait thought. The anticipation has been killing me.
Thomm: This is actually the resumption after their second break. Vaughan has said they plan on taking these breaks regularly so that Staples has plenty of time to be on schedule with the art. So far the breaks have been about 2 months each time. I think it’s a great idea because the fans will wait patiently when they know these things have been planned and are brief, as well as the reason for them. It’s interminable waits with no information about when a book will resume that kills readership. 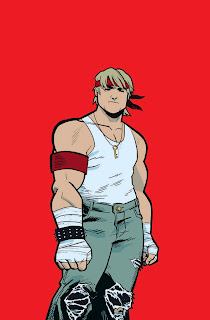 BURN THE ORPHANAGE: BORN TO LOSE #1 (of 3)
story Daniel Freedman and Sina Grace
art / cover Sina Grace
40 pgs / FC / $3.99
A young orphan named Rock was left for dead, now he's out for revenge! With partners Lex and Bear by his side, our hero will find out who burned his home and family to the ground. If that means taking on every goon, punk, and topless stripper ninja in the city... then so be it. Part One Of The Born To Lose Trilogy! Visit Sina Grace here.
Lee: I appreciate the honesty that this is just the first part of a planned trilogy. Why they didn’t go for a straight up 9 issue mini series is another matter but oh well. The story itself sounds pretty generic so the only interesting thing is Sina, of L’il Depressed Boy fame.
Thomm: I’ll grant that LDB’s Grace is a big draw, but I have to wonder about what you’re reading when a topless stripper ninja is generic. 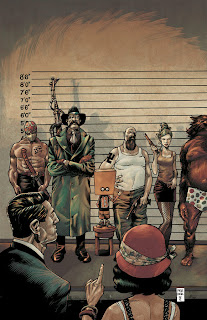 TODD, THE UGLIEST KID ON EARTH, VOL. 1 TP
story Ken Kristensen
art / cover M.K. Perker
## pgs / FC / $9.99
This critically acclaimed hit series (now ongoing!) brings its first story arc to trade paperback format. Follow the misadventures of the Belluomo family and their infectiously optimistic paper-bag-wearing son. Irreverent and politically incorrect, TODD tickles every taboo in one wild ride filled with ax murderers, cults, celebrity stalkers, and a neo-Nazi prison gang. Collects Todd, The Ugliest Kid On Earth #1-4
Lee: Jim and Thomm have talked so much about this that I just went ahead and ordered it.
Thomm: And smart you were to do so. Funniest book I’ve read in a long time. Not for the thin skinned, though. 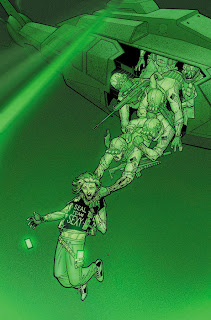 THINK TANK #9
story Matt Hawkins
art / cover Rahsan Ekedal
32 pgs / BW / $3.99
“Field Test,” Part One. Dr. David Loren used to worry about the deadly consequences of his creations from the safety of his laboratory… but now he’s been deployed to Taiwan to oversee a field test gone awry. Will having the mysterious Seal Team 6 as his bodyguards be enough to ensure that David returns home alive. Visit the artist here.
Lee: Most of the Image series are all in the middle of their storylines which makes it harder to pick them. But this is the first part of a new arc so it’s as close to a jumping on point as you will get. The reviews have been predominantly good so this might be a good time to try an issue.
Thomm: Can’t say as I know much of anything about this series, as it hasn’t made my radar. 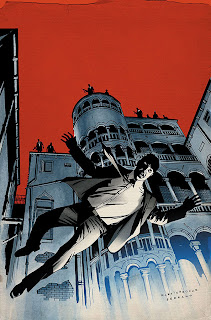 THIEF OF THIEVES #17
story Andy Diggle and Robert Kirkman
art / cover Shawn Martinbrough and Felix Serrano
32 pgs / FC / $2.99
Caravaggio. Picasso. Van Gogh. It’s time for these legends to get acquainted with a real master: Redmond. But is even he daring enough to steal from the Mafia?
Lee: When did Diggle join this title? Obviously there are way too many previews out there (which is why y’all read out condensed versions!!) since I missed this. Diggle is a master at crime caper stories so this should be a good fit. And, looking it up, he’s been on the book for 3-4 issues. Wow, I really did miss this.
Thomm: This is Diggle’s third issue of the series. Kirkman remains the guiding force throughout, but co-writers are coming and going on a regular basis, each one contributing an arc. Diggle definitely fits in with the modus operandi of the series.

Thomm: No surprise that there are a lot of good read from Image. More than a few aren’t even mentioned here, such as the obvious of The Walking Dead. I am a little surprised and the low number of trades you picked this time.
Lee: Walking Dead suffers from high quality.  It's always good.  I'm trying to talk about series that need our help and WD is not one of them.  This month the single issues were better than trades and indies is the only Previews that gets multidays!