As you can see I’m going into retirement by even ratcheting down the number of posts going up on Monday and Tuesday. I’m a slacker! Actually we are entertaining on Saturday and Sunday is Father’s day and I’m going out to Dinosaur World. All of that is my excuse for keeping things leaner this week.

Being a mail order customer I normally get my books on Thursday. Now this makes Thursday a comic book day to remember. New books come in, next week’s list is posted and I order my books and the early peek at two weeks ahead comes out. In addition my buddy at Cosmic Comix posts his best of the week picks and I use that as a guideline for some of my must reads. Many of the following books made that list. 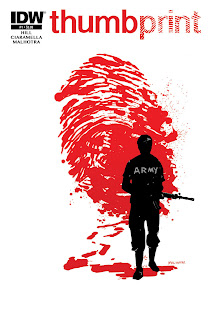 Joe Hill’s Thumbprint #1 (of 3) may have been the best book I have read this week. It was based on a novella by Hill, written by Jason Ciaramela and art by Vic Malhotra. I was immediately drawn into the story. It is about a young woman who has left the army after being involved in the Abu Ghraib incident during the Iraq War. It was a black eye for the when the army’s torture of POWs was exposed. We are seeing her story of both what happened to her at Abu Gharib, her adjustment back into civilian life and a mystery threat that is noted by someone leaving an envelope with a thumbprint in it. It is only going to be three issues long and obviously we do not have all the answers in issue #1, but we are getting a picture of Mallory Grennan. After WWI, there was an old saying “how are you going to keep them down on the farm after they had seen .” It was something to that effect. Now the question is how do you return to normal after you have been part of what Mallory was in ? After dehumanizing and torturing people in the name of a supposed greater good, can you wash that stain from your soul? Who is now torturing her with the thumbprint? It is a good story and I have to say for two creators I have not heard of before, they have produced a top notch book. Next up is Breath of Bones #1 (of 3) By Steve Niles and Matt Santoro plot, on script and Dave Wachter on art. It is in black and white and I have to say I was initially struck by the great art in this book. It is another artist I’m unfamiliar with, but I would gladly look at any book he is drawing. I saw a ton on influences in his art from Alan Davis to John Severin and everyone in between. There is one panel with the water on a soldiers face that reminds me of work by Barry Windsor-Smith. The story is of a young man who is growing up as war is all around him. We start in 1944 and then flashback to life in his village as a young boy. The entire first issue is a build up to the young boy being given a small clay figure by his grandfather and told that he may need to use a monster to fight a monster. It is obviously the Golem, which actually does not even make an appearance this issue. It is the start of a good story and again only three issues long, so worth the price of entry.

Next up is Walking Dead #111 by Robert Kirkman and Charles Adlard. I keep wondering when Kirkman is no longer going to have time to write the book that has garnered him such fame and fortune. It took many years for it to happen, so maybe he will keep on keeping on with the book. Since Kirkman has adapted the team approach to Thief of Thieves, I would not be shocked to see him outline the plot and letting someone else script the series down the road. What is surprising to me is that even though I desperately want to see a five or ten year jump we just continue to move forward in a slow manner. Time passes, but not month for month with the publishing schedule. This issue was fascinating as Negan shows again how much of a cold bastard that he can be and yet is frighteningly perceptive on some levels as he rejects trusting a man in Rick’s camp who wants to sell Rick out. 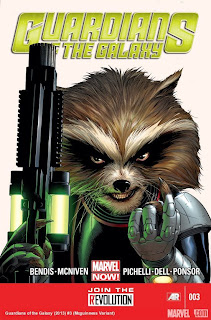 I do note that traditional super hero comics still can be enjoyable, but are certainly far from my favorite. A big favorite with many fans is Guardians of The Galaxy and issue #3 has a great cover. I mean anthropomorphic animals, what is not to love. Brian Bendis with Steve McNiven and Sara Pichelli deliver a great looking book. I also know Marvel is pushing to have this type of series as a movie is on the way with the GOTG. Yet with all of the great fight scenes and political Game of Thrones stuff going on it just feels like I’m missing the purpose of the book. Is Peter Quill trying to overthrow his father? Is he trying to protect Earth? Finally what the flock is Iron Man doing in this book? I have the feeling that with the success of the Iron Man movie that his insertion into this book was more about lining up with the movie then any other reason. Bottom line it is a fun series, not worth the $4 price tag, at $3 it would be fine.

Thor #9 by Jason Aaron and Esad Ribic was a flat out great fight scene as King Thor, Avenger Thor and Viking Thor fight Gorr and his space worm. Of course the big problem I have with almost any episodic story that says it is part 3 of five, I know the Thor(s) can’t win yet. I keep hoping some writer can put in a climax of the story in the middle and surprise me with the story having a different ending, but not this time. It is without a doubt one of the coolest fight scenes this week and maybe for the month. Not a philosophical book, but good entertainment. 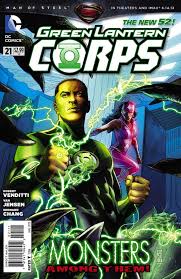 In spite of myself I picked up Green Lantern Corps #21, as I was off this title when Fialkov left under a cloud of editorial mandates. My curiosity got the better of me and Venditti is co-plotting and I have not heard of Van Jensen before, so I took a chance. It was okay. Number one Bernard Chang is way down on the list of artists whose work I want to see. It also went a little all over the place, but it did set in motion the next major enemy that the GL Corps will have to face and that is the *&^%$, I’ll let you find out if you decide to read it. In spite of Chang, I’ll be back for another issue, but this book is on a month by month death watch.

The last book I will mention is Suicide Squad #21 by Ales Kot and Patrick Zircher. The last team got the book this far and for the new DCU any book outside of the Johns, Snyder, Superman realm that gets this far deserves a cookie. The raves have been high on this book and I agree that Kot has scripted a good story and Zircher’s art is always well done. He is a true rising star in the industry in my book. Harley Quinn does a take over of the organization and ends up cutting a new deal for the Squad. It is all well done and the additional of James Gordon Jr. was a masterstroke. But the problem I have is I still have no clue of the purpose of the group. The missions have become secondary to the character study.  I want both and now that we have a new status quo, maybe we get that next issue.

Just two this week, so that is a wrap. Come back next week for my sort of swan song.
Posted by Jim at Tuesday, June 18, 2013