I know these did not all come out last week, but remember I was gone for a week. I’m contemplating being gone from a weekly post altogether too. Again I feel like all that I want to say I have said 450 billion times. Often it is just cathartic to type out my views. 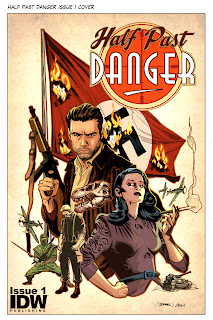 Half Past Danger #1 by Stephen Mooney was a book I went in with almost zero expectations. It was tagged as being about Dames, Dinosaurs and Danger with a burning Nazi flag on the cover. It was shades of Indiana Jones, , Xenozic Tales and an ERB type of novel. Also I have no idea who the heck Stephen Mooney is, but he wrote and drew the entire thing. It was a fun ride. We start in WWII on the Pacific front. Sgt Tommy “Irish” Flynn is leading his squad on a small island doing reconnoitering with a small squad. They find Germans where there should be none. Take pictures and run into a jungle filled with dinosaurs. Only Tommy survives. Then we find Tommy getting drunk when an army Captain and femme fatale show up to recruit him for some mission. The bar fight was epic and now we just await issue #2. Solid art, with great layouts and page designs, all the characters are distinctive and the story is just outlandish and fun. I’m sold. 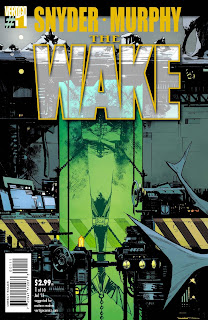 The Wake #1 by Scott Snyder and Sean Murphy was almost a mortal lock with that type of talent on the book. I believe that Snyder’s non-super hero work is often his best work. Add to that the artwork of Sean (Punk Rock Jesus) Murphy and it would be hard to not be a winner. The book is a ten part series and we start 200 years in the future where it appears the world has been flooded by the melting of all the polar icecaps. A young girl is on a quest and then we switch back to present day. The set-up is Dr. Archer is recruited by Homeland security to help out on a problem. She is somewhat of a renegade and was basically kicked out of her government job. We find out that she and others were all recruited and that they are trying to figure out a mysterious fish being that was found during a secret underwater oil drilling project. Snyder packs so much into this first issue with characterization and story all being layered in. It was a stunning job and then we even get a one page mystery going back 100,000 years ago. It was a brilliant start to this series. It just makes me almost cry that more projects like this could not come out of Vertigo which appears to now be a shell of its former self. 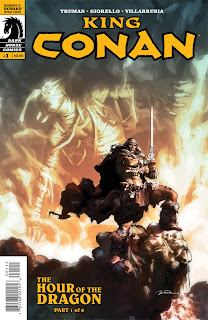 King Conan The Hour of the Dragon #1 (of 6) – by Tim Truman and Tomas Giorello was great. I love the regular Conan series which is a very modern take on the character and yet I loved this book as well, with its more traditional approach. Where Conan uses more light lined and open more indy style artists (for lack of a better term) Tomas’ lush pencils and detailed backgrounds bring this story to life. Plus I’m a big fan of Tim Truman and I enjoy his adaptations of Conan. Conan as a King is often more about others trying to get him off the throne and this is no exception. I have read so much of the Conan stuff over the years it often blurs into one large feeling of blood and guts, but when done well it is worth the price of entry. As a footnote the entire adaptation is being done over 12 issues and is broken out into two six issue series. If you are a Conan or just a sword and sorcery fan I think you would be hard pressed not to enjoy this book. 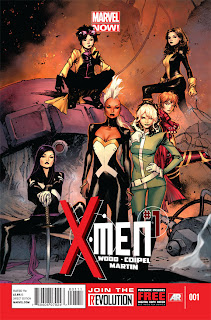 X-Men #1 by Brian Wood and Olivier Copiel was a good start. In fact it was almost a continuation of Brian’s run on Astonishing X-Men in some ways. First off the big deal is it is an all female grouping for the first time ever. And no, it is not about transgender people who are now Ex-Men, X-Men has become the generic term for all mutants. I wonder if the comic was formed today would it have been called X-People? Not the same ring to it. Anyway, the story is all set up. The cast is introduced, the menace is established and we have some nice touches and surprises. Add into that mix some cool action and a nice cliff hanger ending with the big bad showing up and you have the makings of a solid first issue. It was not off the charts great, but it was an issue that was accessible and drew in the reader immediately and of course terrific art by Copiel. 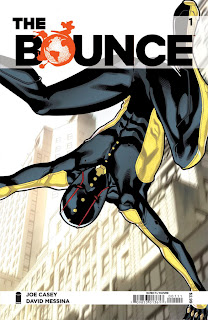 Bounce #1 by Joe Casey and David Messina was very enjoyable. I mean it starts off with the title character taking a hit off a bong. Too damn funny. Jasper Jenkins is our central character and he is both a super hero and somewhat of a slacker. Not on the order of Major Bummer (which I just read the collected edition of and enjoyed immensely) but more on the order of a young man looking for the next high. The story goes off in multiple directions after we have Jasper fighting off a bad guy. The one track is the police are out to get Jasper as they have mistakenly believed he was involved in the crime he stopped. Apparently his brother (or maybe Dad) is the police office looking for his head. Next we have some military types looking for a weapon and finding it via a shady source that has some sort of extra dimensional warrior he has found. Next we see Jasper looking to get high and does via a person who is the drug. After that it gets really strange. I’m not doing this book justice as it was another book that established a lot of the cast and starting moving the plot forward. David Messina’s art was well done. All in all Joe Casey is two for two with me lately as I’m adding this along with Sex to my list.

The exciting conclusion is next.