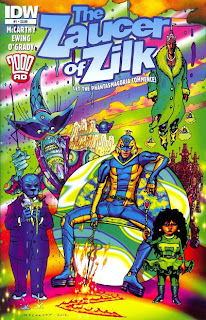 
Our story opens as our hero, Zaucer, last prince in the noble line of Zilk’s, is rescued from a pocket realm created by Zaucer’s arch nemesis Errol Raine, the drizzly drip. Once rescued, Zaucer returns to his role as noble price and idol of millions across various dimensions. He’s a shallow cad until he takes a shine to a groupie, Tutu. When she’s kidnapped by Raine, Zaucer has to get a pair of fancy pants to save her and learn to care about someone other than himself. Can he do it? You’ll have to read to find out.

This is one giant mad cap adventure that is far more than it seems. You can read the story and enjoy the inherent silliness of fancy pants (worth the price of the book alone!) and the eccentric characters like Zaucer, Raine, Spantalex, and the Royal Papz or you can read it as a tale about the worries of stardom narcissism, and growing up. That is the glory of this book it can be as much, or as little as you want it to be.

﻿ ﻿ Ewing and McCarthy have plotted a tight tale but it’s Ewing’s scripting that brings it all to life. The narrator, a character unto himself, talks in a rhymey, sing song way that sucks you into the story. The dialogue is fun and vibrant and the characters match it too.

McCarthy is a genius of an artist and this book only confirms my already high opinion of his abilities. The character designs are outstanding. The ridiculousness of them is akin characters created during Morrison’s Doom Patrol run. And, the coloring in the book has to be noted because it is so spectacular. It really looks like a psychedelic black light poster in comic book form. The amazing thing is, with colors that bright, and that swirly, they don’t overwhelm the art. I don’t know how but the colors are a perfect complement to the story.

The Zaucer of Zilk is like nothing else on the stands. In terms of comics, it’s part Morrison Doom Patrol and Sea Guy with a dash of Milligan’s Shade and X-Statix. It’s that insane. If you are looking for something different then this is the book for you.