After last weeks venture into the obscene, I figured we all needed some good wholesome fun.  This week we look at Rocko's Modern Life which was the 4th Nicktoon ever released in '93 and ran for 4 seasons through '96.  If you like cartoons, the first season is very, very good.  The jokes are clean with just enough bite (read sarcasm and real life situations) to satisfy the adult in the room.  Seasons 2-4 dropped the some of the edgy adult stuff and tended towards more sanitized kid humor.  But for one glorious year it was good family fun.   Interestingly enough, the producer of season 4 went on to create SpongeBob Squarepants!  Anyway, on with the show.

All covers by Darren Auck and Gary Fields 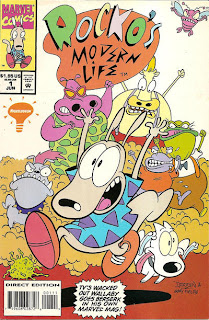 Rocko's Modern Life #1, June 1994
The first issue was very good and captured the essence of the show quite well.  If you liked the show, you were gonna like this! 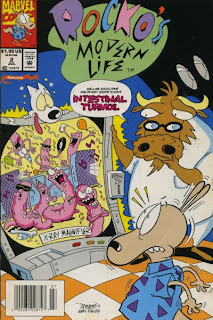 Rocko's Modern Life #2, July 1994
Anyone know why tapeworms and other intestinal parasites are funny?  Me neither but they really are. 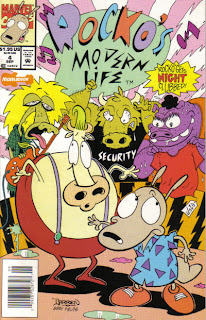 Rocko's Modern Life #4, September 1994
Even thought they're a comic book rock band... I think I've seen these guys live.  Actually, I've seen GWAR which is pretty much a group of guys that look like this so close enough.
Ok, to be honest, I never saw GWAR.  BUT! I did see King Diamond and everything was cool until the guy next to me raised his hands and shouted "Satan!  HAIL SATAN!"  Yep, it was that kinda concert. 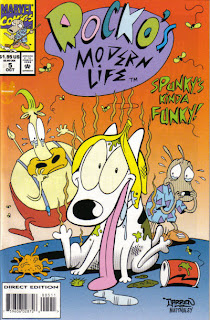 Rocko's Modern Life #5, October 1994
All covers had the same art team... except this one which was Darren Auck and Matt Maley.
This issue spotlights Spunky the dog who was a scene stealer if ever there was one. 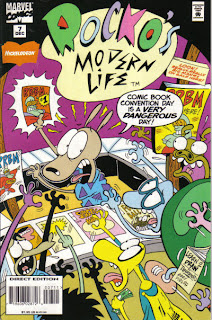 Rocko's Modern Life #7, December 1994
Of course, every comic book tie in must have a convention issue!  Aaahhh, for the glory days when comic books weren't so accepted and this was just nerds poking fun at other nerds.