So, a double post Sunday!  Remember how I asked which deaths were "the best" or "most meaningful" to the guys.  Well, that turned out to be the wrong question.  I (wrongly) assumed that they would limit it to characters who had been around for more than a paragraph, or characters that actually had a story line, or any other number of common meanings.  I didn't get that.  I got so much random crap from the "death" of characters who were no more than text on a page to "deaths" of characters that were resolved in the same issue.  Anyway, there were some good points of discussion so here's the remainder of the list. 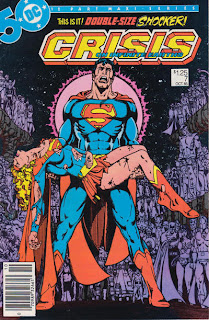 It's funny that everyone always talks about these two deaths in conjunction, but everyone only remembers the Supergirl cover.

Ferro Lad - Legion of Super Heroes
Whenever we talk about DIC, some LSH junkie always brings out Ferro Lad.  I just don't care about him.  In fact I never have.  He should be banned from all DIC discussions just because he's annoying. 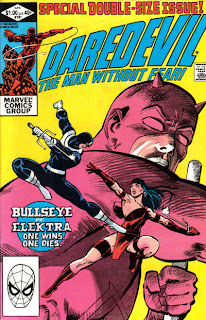 Elektra, Daredevil #181, April 1982
Shocking.  There is no other way to describe this issue.  No one saw it coming.  Certainly no one saw the violence coming.  And the cherry on top... Elektra dies in DD's arm.  One of the best single issues every written.

Bucky, Uncle Ben, Thomas and Martha Wayne
I'm not sure any of these DICs should count.  They aren't death's per-se but motivations and plot points for other heroes.  Heck the Wayne's didn't show up on-panel and were nothing more than a paragraph for decades.  If you aren't on-panel this I say it doesn't count.


The Guardians of the Globe (Invincible)
Yeah, I guess so.  This was one of Thomm's picks and as much as I like Invincible... I just don't care about the Guardians. 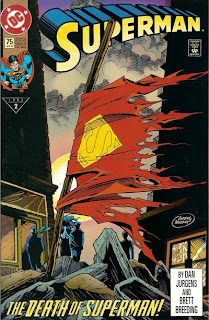 Superman, Superman #75, January 1993
Was it a marketing gimmick?  Heck yes!  Was it well done?  Sure was!  It did what it was supposed to do... sell lots and lots of comics.  It's hard to argue with that.

The SA Doom Patrol is probably up there with Ferro Lad as an over-glorified death.  But in this case, it was the last issue of the book and the bad guy got away!  You really can't top that.  This was great stuff. 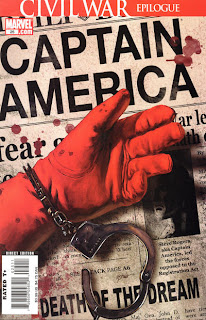 Captain America, Captain America #25, April 2007
Was it a gimmick like Superman's death?  Oh yeah.  Was it wildly entertaining and did it sell a crap load of comics?  Oh heck yeah.  And, Cap's death, being shot on the stairs of a court house, was perfect.  Even though we all knew he was coming back, you gotta love the execution!  No pun intended.

The Death of the D-List, Eclipso #13
Why?  Because the series was bloody and the deaths of the characters was equally so.  On top of the fact that no one (pre-internet solicits) saw it coming and this book was hot for a year.... until they brought most of the heroes back

Jarella, Incredible Hulk #205, August 1976
This is up there for tragic moments in Hul history.  I'd forgotten this little point until Matthew mentioned it.  Unlike Betty who was Bruce's love, Jarella was Hulk's love and her death struck a powerful note.  It should also be noted that Peter David later killed of Jim Wilson in Hulk #420.  It was a public service annoucement about aids and handled very well. 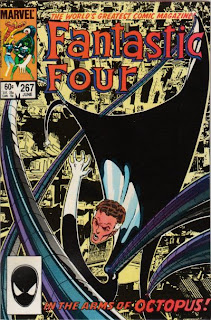 Reed and Sue's second baby, Fantastic Four #267, June 1984
I need to go back and re-read  this issue.  I was far to young to appreciate what Byrne was doing at the time and remember going "oh that's too bad."  Several years later with kids of my own, I bet this issue will be alot more poignant.


This time I'm really done.  Now stop reading this junk and go outside.
Posted by Lee at Sunday, June 30, 2013