Lee: IDW used to always be my favorite previews but not so much lately. It seems like Image and DH have really stolen their mojo. If I were a bigger GI Joe, Star Trek, or Dr. Who fan I’d be thrilled but…

Thomm: Yeah, IDW has a lot of the licensed stuff. Even as a fan of Star Trek and Dr Who, that hasn’t translated into me wanting to buy comics about them. 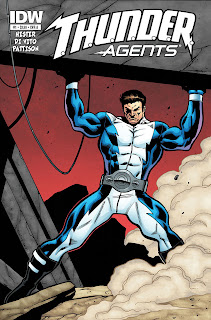 T.H.U.N.D.E.R. Agents #1
Phil Hester (w) • Andrea Di Vito (a) • Di Vito x 4 (c)
The T.H.U.N.D.E.R. Agents are dead, or will soon be, unless new recruit Dynamo can master the incredible but lethal power of the Thunderbelt in time to rescue his teammates from the mysterious Iron Maiden. The timeless heroes return to comics with a vengeance in this blistering first issue from writer Phil Hester (Godzilla, Invincible Universe, Wonder Woman) and artist Andrea Di Vito (Dungeons & Dragons)!
Lee: The sad part of this… I have no interest in these characters. It’s nothing against Hester or Di Vito because they’re a good creative team. DC is to blame! They really used up any good will I had with the last botched launching of the series/characters. Which begs the question, how did IDW get them?
Thomm: I’d have to care to answer that question. I paid no attention when DC had them. I’ll pay no attention now. Thunderbelt? Sounds like a suspicious weight loss device. 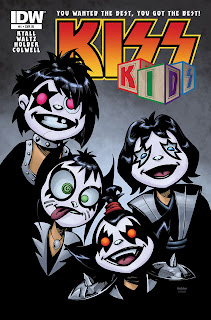 KISS Kids #1 (of 4)
Chris Ryall, Tom Waltz (w) • Jose Holder (a / c)
Presenting the adventures of Li’l Demon, Starchild, Catkid, and Spacey… the KISS Kids gang! This rockin’ new comic offers adventures for all ages (and many in-jokes and familiar characters for the KISS faithful, too). No blood or fire here, just laughs and fun tales of the little costumed maniacs and the crazy town in which they live. FC • 32 pages • $3.99
Lee: I expect this kind of marketing schlock from Dark Horse (Sorry DH but I do) but I never expected IDW to do the same. I am sure there is a point where books like this, and licensing agreements like this, pay the bills but this is the best IDW could do?
Thomm: Does Li’l Demon get started with the macking on thousands of women in this book? Not at all interested in this book, even though I like KISS. 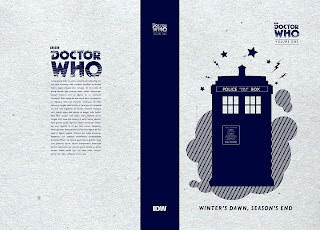 Tony Lee, Jonathan L. Davis, Matthew Dow Smith, & Al Davison (w) • Al Davison, Matthew Dow Smith, Blair Shedd, & Kelly Yates (a) • N/A (c)
The complete 16-issue Series I featuring the 10th Doctor, as portrayed by David Tennant, plus the 2010 Annual are collected in this oversized hardcover. Writer Tony Lee is joined by artists such as Matthew Dow Smith, Al Davison, Blair Shedd, and Kelly Yates to bring you the last comic adventures of the 10th Doctor! HC • FC • $49.99 • 408 pages • 7" x 11"
Lee: If I were a bigger Dr. Who fan I would be really excited about this. As it is, I am only marginally exited. I’ve a variation of Thomm-itis. I like the big page count and complete story AND I like the HC. I am just not sure I care $50 worth of Dr. Who thought.
Thomm: Look, Tenant was a great Dr Who. The thing is, he’s not actually any part of this. A drawing that looks like him isn’t the same as him acting the part. Dr Who is reliant on two things, great scripts and great casting of the Doctor. In a book or comic you can only have half the equation. 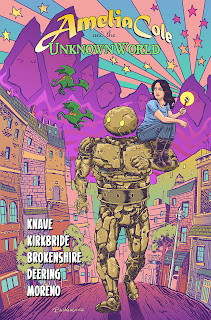 Amelia Cole and the Unknown World
Adam P. Knave & D.J. Kirkbride (w) • Nick Brokenshire (a / c)
Amelia Cole lives in two worlds–literally. One runs on magic; the other is built on technology. When the barriers between both worlds start to break down, Amelia and her Aunt Dani must take extreme action. It's the start of a whole new world in adventure, magic, and excitement as Amelia Cole steps forward to do what she knows is right, even when the consequences might be wrong. TPB • FC • $19.99 • 152 pages
Lee: This sounds really fun. The art looks great and the bright colors scream fun for all ages. This could be worth a peek!Thomm: Now this is an interesting premise, particularly the part about right action leading to wrong consequence. Best thing we’ve seen so far. 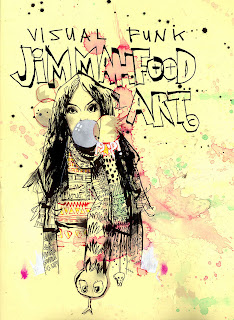 Visual Funk: Jim Mahfood Art
Jim Mahfood (w / a / c)
Jim Mahfood aka Food One's sixteen year long professional career has spanned across the fields of comic books, illustration, animation, advertising art, murals, gallery shows, body painting, and live art in bars and nightclubs. This is Mahfood's first 250 page classy hardcover art book, featuring the absolute best of his diverse work, from finished art, sketches, behind the scenes concepts, never before seen drawings and designs, photographs of painted girls, and more. Mahfood's style, the neo-psychedelic Visual Funk, is a combination of various influences that Jim has managed to turn into a recognizable brand, garnering a loyal following across the glob
e. This book is a must-have for comic book fans, art lovers, and pop culture connoisseurs alike! HC • FC • $49.99 • 256 pages • 9.5" x 12.5"
Lee: Mahfood is a heck an artist and if you like art books then this is sure to be good. Not to mention that IDW is really good at these types of books. But can someone explain to me what “live art in bars and nightclubs” is????
Thomm: I can hazard a guess based on my college years. There was a guy who would paint something while music was playing, usually loud and rockin’. You’d watch him but not have any idea what he was painting until the end, when he’d flip it around to reveal a painting of Jimi Hendrix or some other rock legend. Something like that, maybe. Anyway, this isn’t my kind of thing.

Thomm: Looks like Amelia Cole is the one thing that’ll have my interest. Of course, Memorial is coming out, too, which is good.
Lee: For me, outside of Ameila, it's interesting but I am not sure how much I will spend.  There's nothing that makes me want to pre-order.  Lots worth looking at on the stands but not enough to commit to before that.  Image went through a phase like this too so hopefully it will pass soon.
Posted by Lee at Friday, June 07, 2013