This week was so massive that I have not had a chance to read close to everything but these five are the type of books that keep me reading comics. 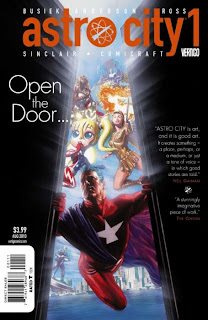 After far too long of an absence has returned, this time it is under the Vertigo banner. Who knows all the convoluted machinations that must have gone on behind the scenes, but I don’t care as long as the creators are happy and we are getting an comic. Kurt Busiek in the back matter explains that he has been dealing with a long term illness that saps his ability to work as much as he would like. He states that he is recovered enough to be more productive and that during the interim he has stockpiled 10 full issues of scripts. So now if there are delays in publishing I’m guessing it won’t occur for over a year. Kurt Busiek and Brent Anderson have managed to create a world of super heroes that tell stories about people first and foremost. By morphing his man on the street POV from the Marvel series, Kurt now tells us stories about people. Powers maybe involved, but it is the story of the person and the character study that is the most interesting. Brent Anderson always does his best work on and Alex Sinclair is one of the finest colorists in the industry. It is all topped off with Alex Ross’ signature photo realistic style on the cover. This is a perfect comic book package. Heck Kurt is even promising to keep a page for letters, something sadly missing in any book published by DC.

So after all of that, what about the comic itself, it was the best book I have read this week. We start with a framing device of the Broken Man. He acts as the narrator of the story. Inviting us into the story, soliciting our aid and telling us we work for him. Then we jump into the story with American Chibi. I had to Google chibi to find out it means “Short person” or “small child” and is usually referring to a cute anime type of character. She is wonderfully bizarre and brutal as she takes down a group of bad guys. Kurt also gives us a mystery of a huge floating glowing door that appears over the middle of the harbor of the city. We then meet our everyman. He has been divorced about 17 years, has two grown daughters, relatively successful but finds this stage of his life to be somewhat empty. It is so nice to read something about this type of character and set in a fantastic world of super heroes. It is the core of and this first issue delivered all that and more. It helps that Ben Pullman, our everyman, is highly relatable for me. I have two grown daughters, I’m divorced and I question what to do with my life at this point. Of course there are differences as I’m happily remarried and there are no super heroes on the Gulf Coast of Florida (or anywhere). The story progresses as the door opens and it is a godlike being from another part of the Universe and it is looking for a liaison and that becomes Ben. Then we get a nice reveal about the Broken Man and I’m once again enthralled and happy to be back in . 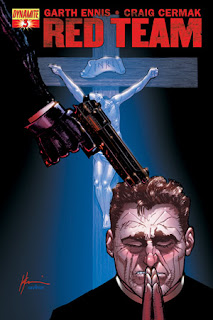 Skipping to something totally different is Red Team #3 by Garth Ennis and Craig Cermak. The more grounded in reality a story line is set in, the better Garth’s work. Even his seminal work on Hitman was constantly de-emphasizing the super heroics. The story about the hit team of police officers is great stuff. Every issue we have a different member narrating the story. A simple shot of a man behind an interrogation room telling the story of the killing. Who they have been talking too is still unknown and while the set up seems like it would be boring, the stories are great. This issue it is about Eddie and he brings the next target to the group, a catholic priest who is a pedophile, but is still in the church and a priest. Now from my reading of Garth over the years I know he has a hard on against religion and Catholicism is his main target. Being a more secular person I have no issue with this, but it was an issue comics have never broached in my readings and it was a good story. Eddie not only is interested in taking out someone beyond the law, but someone who by the nature of his position is thought to untouchable. It was also a test on Eddie’s part to see if the group was okay with taking out bad guys of any stripe. In addition Ennis examined Eddie and his wife’s relationship as they are dealing with the death of their unborn child. A lot of “heavy” stuff all packed into one issue. It is a great series that deals with a lot of issues and concerns and meets them head on. There are no true good guys or bad guys, just choices and how those choices can change the life you live. 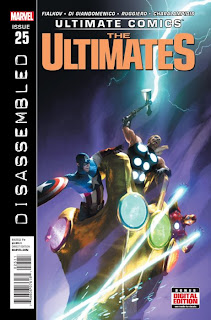 Okay, now I’ll switch to the most traditional super hero book of this group Ulitmates #25.   Part of the story with this book is that the writer is Joshua Fialkov, who infamously walked away from two Green Lantern books at DC after doing some magnificent work on I, Vampire. Joshua is a name I know from some independent work that he had done and I, Vampire got everyone’s attention. DC has been pissing off creators and driving them away in what seems to be droves. While he is wrapping up his mini-series on Alpha for Marvel, this is a higher profile book and he hits the ground running. I have not been following this book for some time, yet I felt it was very accessible. The regular Ultimates are taken down by the Hulk, Mr. Fantastic, Quicksilver and Kang. The Ultimate Universe characters are of course very different, but it was easy to pick up the story in a few pages. The Infinity Gauntlet is being put together and this Universe’s Kang (female) is intent on saving the world. A little confusing given how these are the “bad” guys. Still it was a fast paced action adventure that seems intent on once again re-setting the I was less impressed with the art, but it is curious that the Infinity Gems are showing up in this Universe just as the Infinity event is brewing over in the regular Marvel U. Plus the rumors of Marvel doing something major again to the Ultimate Universe are all over the place. The bottom line for me is that I enjoyed the book and glad to see Joshua Fialkov’s name associated with a series again. DC screwed up losing him. 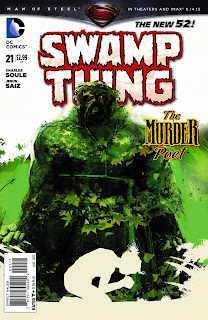 Swamp Thing #21 by Charles Soule and Jesus Saiz was a great issue. I love Scott Snyder’s work and right now he is DC’s comic god, but Soule is making this book better then it ever was under Snyder. Of course Jesus Saiz is one of the best artists around which helps. It seems like Saiz receives very little acclaim. Still I have added him to my prestigious list of artists whose work I want to own. This book is a text book example of giving us a one and done story that builds on the overall arc of the larger plot. It was also a book that could easily have been a jumping on point for a new reader. A woman shows up asking for sanctuary that was offered to her 800 years ago by a Swamp Thing. She is pursued by killers due to the rumor that if they kill her they get her ten centuries of life. It goes on from there and wraps back up into the story about the Seeder. The tagline for the next issue is: The Whiskey Tree. Are you kidding me, I’d switch to whiskey if they had one of those. 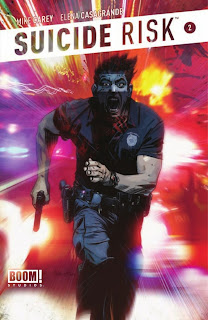 The last book in this group is Suicide Risk #2 by Mike Carey and Elena Casgrande. It is pretty funny to see BOOM start to become a viable choice for creators with Paul Jenkins and Mike Carey making there home there. Both of their books would have been projects once done by Vertigo or even Image, but I’m guessing Vertigo is no longer a viable option for many of these projects. Carey’s Suicide Risk continues to build from last issue. Our main character Leo now has super powers and is starting to learn how to use them. The mystery of who the hell gave him these powers is right below the surface. In this issue we are starting to see the impact the powers are having on him as he is having strange dreams. It appears the powers are wiping out some of his memories. This all may play into why everyone who gets powers eventually becomes bad guys. Of course Leo has a wife and two kids and it feels like this is not going to have a good ending. The story structure is very straight forward with no annoying time jumps and such, just our POV character learning with us as he goes. A very strong start to what looks like something that could be a great series.

Part 3 will be a series of quick impressions of everything else I read this week.

Look for it around 9AM US East Coast Time.