Recently a friend loaned me this book that is being put out by a publisher he's supporting via Kickstarter.  I've not heard of Hound Comics, and as far as I can tell, this book is still a good way from reaching publication.  In fact the company appears to have just reached Diamond's preview solicits for July.  Clearly we're talking small press. 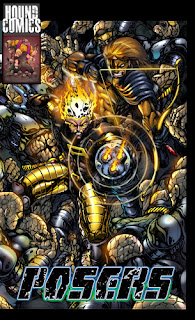 Having read this issue I think they have a decent start for this comic.  The book is written by John Pross, pencilled by Emil Cabaltierra, and colored by Omi Remalante Jr.  It has an interesting concept where people can compete to become superheroes.  One man who has tried several times and wants to try again finds a short-cut when he becomes part of a stage production that's being sold to the public as actual superheroes preventing an alien invasion.  He's offered to be made into an actual superhero if he goes along with the deception, saving him from trying to make it through the competition.

It's interesting that the book takes this angle.  It appears to be working toward a team book with most of the superheroes already established but only two of them show up in the course of this book, and that only for a few pages at the end.  Those are the only two I'm certain are superheroes.  Other characters appear during the filming but I don't know if they're the heroes or actors.  At least one of the team that showed up during the fake part was an actress, as the actual hero died some months before.  The team is now being filmed re-enacting her death so it can later be shown to the public.  It's a little confusing as to who else in the filming is an actual hero or an actor.  It's even more confusing whether the Mr Amazing who shows up at the end to speak with Slugger, a sort of Amazonian who beats up other people to relieve her own constant pain, is the same guy who was in the filming.  I think he is, but I'm not certain.

(I see by a house add that Slugger is to have her own book coming out this year, too.)

While the story holds potentional I wasn't enamored of the art by Cabaltierra.  It's not bad.  He gets the story across and employs a number of camera angles in the process.  It's just somehow busy.  Maybe it's the heavy line.  Maybe it's that there seem to be a lot of close ups.  Something just doesn't sit quite right with me.

I think the biggest impediment for the book, though, is the price.  According to the cover price, they're looking for $5 for one issue.  That's a lot for 22 pages of story.  Yes, it's on a high quality paper and shows some very good production values, but that's an artisanal price on a mass production quality item.  Even if this book raises sufficient funds on Kickstarter to get it off the ground, I don't see it making enough of a splash to survive with that price.
Posted by Thomm at Thursday, June 20, 2013

Email ThisBlogThis!Share to TwitterShare to FacebookShare to Pinterest
Labels: Previews