It's Father's Day so I went with a manly magazine this week.  Actually, it's one of the last great comic magazines that was produced! 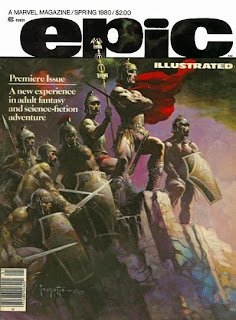 Epic Illustrated #1, Spring 1980
Painted:  Frank Frazetta
The first issue not only had a fantastic over by Frazetta but included a Silver Surfer story by Stan Lee and John Buscema, a story by Arthur Suydam, and of course, the start of the Dreadstar saga. 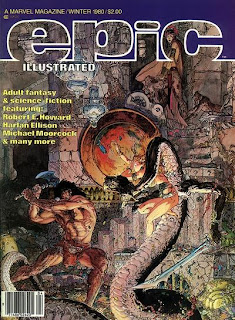 Epic Illustrated #4, Winter 1980
Pencils:  Michael Kaluta
I've always liked this cover even if it felt cluttered to me.  Of course, clutter is a hallmark of Kaluta's work so it makes sense.  Inside there was an Elric story by P. Craig Russell and Almuric by Tim Conrad 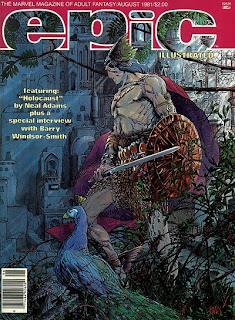 
So what's the difference between cluttered and just plain old over-rendered?  I don't know either.  Inside there is a 16 page Neal Adams story and a shorter by by Dean Motter of Mr. X fame. 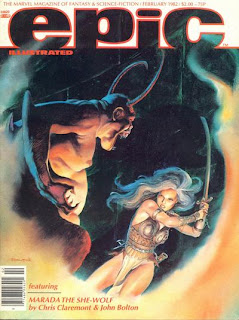 Bolton is such an amazing artist I wish he did more.  Inside there is Marada the She-Wolf with art by Bolton, more Cholly and Flytrap by Suydam.  And, the good news, Titan books is reprinting the Marada material.  I ordered it months ago but I don't know when the release date is... but I ordered a copy. 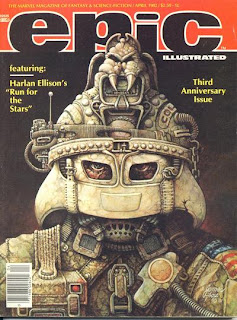 Epic Illustrated #11, April 1982
Painted James Fox
I'm not familiar with Fox but this cover makes me want to find more work by him.  And, it's different from all the other covers in the series which is never a bad thing.  Inside, 18 pages by Ken Steacy and 10 pages by Rick Veitch.

That's all for today, now go out and enjoy a wonderful Father's Day.
Posted by Lee at Sunday, June 16, 2013