There is a part of me that wishes I had more time to devote to writing these mini-reviews/impressions of each book. That is because regardless of whether I think it is trash, entertainment or genius I know that a lot of hard work goes into creating each book. Often I think that that the goal of the effort is missed. If I had more time I could play editor and try and offer more constructive criticism as opposed to the brief comments I make. I need to hit the lottery. 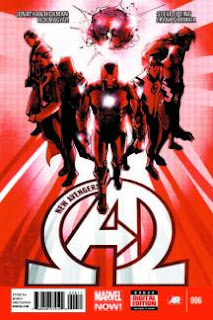 New Avengers #6 by Jonathan Hickman and Steve Epting was its usually maddening self. On one hand many people will say it is a great book and heap praise upon it. I often feel like many of Hickman’s books are praised for fear that if you say it is not understandable people will think you are not cool or maybe just too stupid to understand his brilliance. I feel it is the Emperor’s new clothes syndrome with some writers. No one wants to say it is crap or should be written with more explanation. As with Azzarello, Hickman’s work is often a challenge to understand. That can be a good thing; it can also be a bad thing, especially when I’m reading over 100 books a month. Epting’s artwork as always is clean and concise. He is a top flight artist, but not a top artist. I don’t think I have ever disliked Epting’s work, but he is somewhere between great and good. As for the story itself we are six issues in and can someone tell me what the hell is going on. I know the Black Swan (wonderful name and reference) is captured by the Marvel Illuminati. I know they are trying to save the world from other worlds coming into our world and killing everyone. Of course I was confused that this issue another planet is next to ours but there is no impact of the gravities. The Black Swan spouts stuff that sounds like a fortune cookie on crack/cocaine. The heroes stand around and talk to each other, concepts are introduced and they destroy a world. They are all emo about it, but a page before it was barren with no life, then when it is destroyed the caption reads “It was an avengers world.” I’m obviously missing a lot of what Hickman is trying to convey. I don’t have the time to re-read his current epic.

Wait for the trade, it should read better.

Sex #3 by Joe Casey and Piotr Kowalski was a solid issue in this series. If anything it suffered from middle chapteritis. The plot was moved forward, characterization was deepen, but outside of the Catwoman character pleasuring herself while dreaming about her and the Batman character nothing earth shattering happened. That is not a condemnation it is just a factual statement that in the course of a long form story sometimes a chapter has to advance each character but we lose any climaxes occurring (except for the Catwoman character). I crack myself up sometimes.

Avengers #12 is by Jonathan Hickman and Mike Deodato. See my above review of New Avengers. It is the same issue with this story, just better art.

Buy the trade or wait till I put the issues on Ebay.

As I write these posts I run out of steam, but I have two more books I want to mention.

Captain #7 by Rick Remender and John Romita is still rollicking good fun. I’m not sure why, but the Jack Kirby acid trip has been an entertaining story. Plus I’m curious how this will all play out when Cap gets back home. Then I’m curious to see where Remender takes us next.

Buy it – or pay me when it goes on Ebay

Earth 2 Annual #1 by James Robinson and Cafu. The thrill is gone. I liked the issue, hated that we get no reveal on who the new Earth-2 Batman is, liked the origin of Al Pratt’s powers (actually still left it a mystery) and enjoyed most of it. No matter as Robinson has quit. Now the next guy may do well, but it just feels like another time that DC us pissing off the creator.

Come back next week for more rants, reviews and commentary.