As I look to transition away from weekly work I hope to do more opinion pieces discussing things like who is the creator of Superman as he exists today, are comics important to Warner Brothers and Disney and other such topics. I also want to start a series of columns where I induct creators and characters in the Comics And… prestigious Hall of Fame. For fun maybe try and do an occasional Hall of Shame. Of course a few reviews and rants thrown in along the way, just no longer on a set schedule. As I work out the timing with the crew I will let you know also.
Geez, another long preamble, it is like I can never get to the point of these posts sometimes. This post is more the short blurb type of thing. 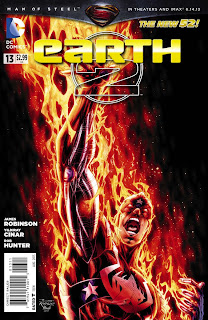 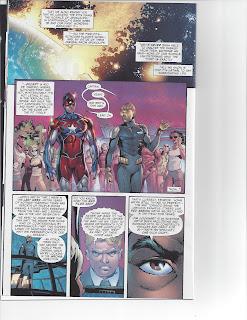 Earth 2 #13 by James Robinson and Yildiray Cinar. I enjoy this book, I’m not dead in love with it, but I like it. I’m bummed Robinson has walked away from it as he seems to have had a long range plan for what he is doing. I’m not 100% against him leaving as that long range plan is taking forever. Also as much as I love Robinson, he seriously over writes a modern comic
as can be seen from the scanned page. The series is has such a wide ranging cast it is hard to pull it altogether so the book has been more about Earth 2 and not a true super hero group book which I kept expecting. I’m curious if DC will still do a second book and what the long term plans are now for Earth 2. Sadly I like Earth 2 better then the new DCU.

Buy it for now.

The Avengers #13 is by Jonathan Hickman, Nick Spencer and Mike Deodato. It is hard to not like a book by Mike Deodato. I keep remembering he had a different style at DC and I thought I read where Marvel asked him to adjust his style. Anyway he is a star at Marvel now. One thing I will give this series is that I sold the first 12 issues for $36 on Ebay, so it was almost a rental situation for me to read along. I’m concerned to see Nick Spencer’s name on this book as I’m not a fan of his work and wonder where this is going. This concludes the arc of the strange children of the brought about by the builders. It is a good story but how this is all going to play out and pull together is questionable. Hickman’s plan appears to be too ambitious or at least needs a faster pace  then even the one it is on now. 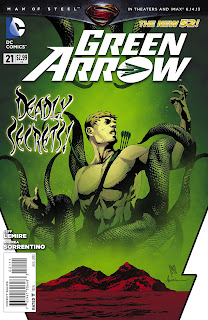 Green Arrow #21 by Jeff Lemire and Andrea Sorrentino I want to like more then I do. I’m a fan of Jeff Lemire’s work like , Underwater Welder, Sweet Tooth and enjoyed his run on Frankenstein. Sorrentino’s art is dark and moody and highly enjoyable, so this series should be awesome but it isn’t. I read that Lemire likes to have an ending in mind when telling a story and maybe long term this series will pay off, but right now it has been all about breaking GA down to more of a street level hero with a smaller back up team that almost echoes the TV show. On the other hand we now have introduced a deep mythology and put Ollie squarely in the middle of it. Mysticism and cults and Green Arrow are a different mix. I’m not 100% sold, but will give Lemire and Sorrentino a lot of rope.

Avengers Arena #10 is losing its steam for me. I have nothing invested in these characters; the deaths seem a little random. In this issue the big bad is Katy. She is fighting a bunch of the characters and has one at her mercy (X-23) and lets her live, but eventually kills another character Nico. Starting to wonder what is the point of the series. I also can’t help but think it is odd that Marvel is actually allowing these characters to be killed. Then I look at the line up and why would anyone care if they are killed off. I’m starting to waver on this book.

Cable and X-Force #9 was not by Dennis Hopeless as writer. This was disconcerting as the last arc was great and this issue felt a little bit like a fill in. We have a one and done about Hope going after Cable. The solicitations show Hopeless back on the book, so all should be good. It was a decent read, but eminently one that could be skipped. 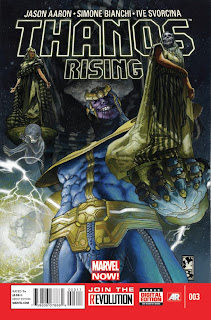 Thanos Rising #3. I hope the series will sell on Ebay. It is okay, but also at this junction it is pointless. This issue we see how Thanos tries to find some passion in his life via proliferating the galaxy with his children and then pirating without killing. The pivotal moment where he comes into his own again and kills the pirate captain was essentially skipped. I felt like it was a cheat as the writer just has Thanos about to acquiesce to being decapitated and closes his eyes. When he opens them he has killed the captain and is hailed as the new leader. That critical transition demanded some thought process or understanding for the reader as to what switch got thrown for Thanos. From there he goes home and his ex-girl friend asks him to kill all the women he slept with and his offspring to prove his love. Of course he starts to do it. His love has to be revealed as Death soon.

Iron Man #11 – Just weak, weak sauce. I want to skip it but now feel motivated to finish the arc to be able to sell on Ebay.

Avoid it until I sell it on Ebay and bid it up as an instant classic.

Locke and Key Omega #5 by Joe Hill and Gabriel Rodriquez is a great issue in a great series. It is seriously way too late to jump onto this book, but it is well worth it to pick up the first trade and check it out. The series has great writing, great characterization, and fantastic art. It makes you salivating with anticipation for the next issue. 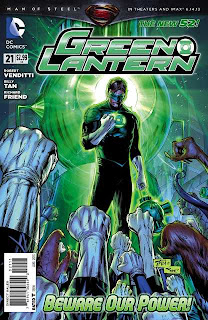 Green Lantern #21 by Robert Venditti, Billy Tan and Richard Friend was a good issue and oh look Matt Idelson is the group editor. I actually enjoyed this book more then the Geoff Johns stuff. It felt like a breath of fresh air. Johns and Mahnke did some good and some great work on the book but it was time for a new approach. Hal and Carol can’t get there relationship right, Hal is called back to Oa and put in charge of running things. He tries to say it was not his thing, but he was appointed anyway. The new Guardians go on hiatus and everything goes to hell. I’m sold.