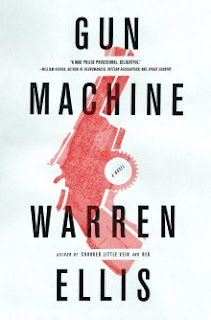 Ever so often one of us here at Comics And... actually reads a book.  It doesn't happen often because books take so long to read.  Before you snicker at that comment, think about it for a second!  If I don't like a comic I've only wasted 10, maybe 15 minutes, of my life.  If I don't like a book, I've wasted hours AND time that I could've been reading a good comic.

This past week I read Gun Machine, a novel by Warren Ellis.  I am happy to say that it was fine.  If you want to know why it wasn't great, read on but be warned SPOILERS abound.

The story starts as John Tallow, a slug of a policeman, and his partner respond to a call in a condemned tenement.  His partner is killed and John stumbles onto a cache of guns.  Tallow has found an apartment covered in guns and each one is connected to an unsolved murder.  Can Tallow, with the help of a pair of misfit CSU's figure out why there is an apartment full of guns and solve all the murders?  More importantly, what happens if the owner of the guns wants them back?

Gun Machine is your standard police procedural novel and if it were written by anyone else I would have been completely satisfied.  The problem is that it was written by Warren Ellis so my expectations were much, much higher.

It was never bad but by the time I got to the end, there were a stack of little things that left me feeling dissastified.  It started with the fact that our hero sees his partners head blown off and feels nothing for 60 or 70 pages.  Ok, maybe he's in shock but even when he does feel something it's only for 2-3 pages and then it's forgotten.  I don't need my policemen to be cry babies but I would expect the death of your best friend to affect you far more than it did.

Also, in a very strange twist, Ellis wrote the bad guy almost too well.  He really captured the psychotic nature of hum but in so doing made me believe he was something more than he was.  There was a certain supernatural undertone to the first 250 pages that is gone by the conclusion.  Even worse, it's replaced with a very ordinary serial killer.

The good of the story?  Once you get used to Ellis writing in crisp , short sentences the story really moves.  Ellis always had an ear for dialogue and the characters all feel real.  In Tallow, Ellis was recreated Sam of Sam and Twitch fame, as a down on his luck cop.  He's just miserable enough to be loveable.  The CSU misfits serve as both comedy relief and sarcastic outlet for some of Ellis's snottier ideas and words.  They have their own distinct voices, and while on the page are fun to read about.

If you start with no expectations and an understanding the the crazy killer is nothing more than an ordinary crazy killer then you will enjoy this.  I guess I would call it a light fluffy read that's perfect for the beach.