I’m back and therefore this week in review will encompass whatever I happened to read and felt compelled to comment on.

Of course before we jump into the posts I will give you the links to next week’s books at Cosmic Comix for the clean list and MidtownComics for all the details you could want.

I hate next week’s books because I have three hard cover collections showing up on the same week. I order these books and if they showed up when they are supposed to the bill would be spread out. It never happens and inevitably a bunch of stuff shows up the same week. The books that look great are the return of Astro City – now a Vertigo title, Ultimates with Joshua Fialkov as the new writer, Ten Grand #2, Locke & Key and Polarity. Plenty of other stuff too including the new writer’s first turn on Green Lantern now that Johns has ended his long run. John’s run will be remembered for adding the rainbow corps, but he never advanced Hal ’s character. Sadly in five years it could all be changed again anyway. 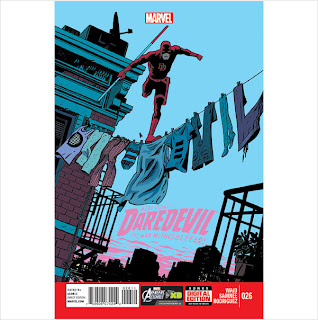 Okay onto the comics and why Daredevil #26 is the most disappointing comic of 2013. Mark Waid has been doing a solid job on this book. It is certainly a better run then what the horrible Shadowland series. The mini-series following it did nothing for the character. Even Brubaker and Bendis runs before only were in many ways continuation of the themes Frank Miller had established a long time ago. When Waid took over I thought we were going to get a different take on the book. When Chris Samnee joined as the regular artist I was thrilled as Chris’ artwork has such great storytelling and a minimalist style to his line work. His work is very complex and yet is clean and simple. Yet Mark succumbed to the best theme Daredevil has and that is tear the character apart and let him fight his way out of it. The problem with long lived characters is that they are still the same character and I as a fan have hung around too long. It is been there and done that way too often. Even with all of that the villain Ikari was a perfect mirror image for Dardevil. Ikari has Daredevil’s powers and can still see. I loved that twist last issue.

Until this issue I was happy even with Waid doing a Frank Miller on Daredevil until we got to this issue. The bad guy and master planner behind it all is a paralyzed Bullseye in a stand up Iron Lung thing. He can only use his mind now.  Bullseye was killed by Daredevil while he was possessed in the Shadowland story. He run him through the chest with a sword. The hand tried to resurrect him, but they did not succeed. Apparently he is alive now. Bullseye could use anything and make it a deadly weapon; a ball point pen was as deadly as a knife in his hands. He has never been shown to have any strategic type planning skills, scientific knowledge, detailed records of Daredevil’s origins or huge financially resources. Why all of sudden he is able to pull off all that to torment Daredevil does not even make comic book sense. In the next couple of issues maybe Mark has some rabbit to pull out of a hat to have this make sense but all that has been pulled off would make more sense if Doctor Doom was behind it. Right now the dialogue has Bullseye behind everything and it does not fit the character at all. Mark Waid is a very good writer and I expect better out of him. Of course this makes it easy to cure Foggy as it can be he never had cancer at all it was a setup by Bullseye. In the end I will continue on the book to see how it plays out. Instead of anticipating the next issue it is more akin to morbid curiosity to see how it ends.

Daredevil book points to the biggest problem I have with Marvel and DC. I have stayed at the party too long. They are never going to do what I want to see happen, which is let the characters change and grow older. Therefore writer after writer is going to come in and tell the best story they have and the company will allow. The other side of comics is the characters are worth too much (cartoons, merchandising and movies) for a giant conglomerate to even allow for real change. After 50 years of reading these stories I have to let go and move on. The less I get from DC, the more I realize I don’t miss it. I keep thinking it is time to end all my buying of Marvel and DC or reduce it even further. 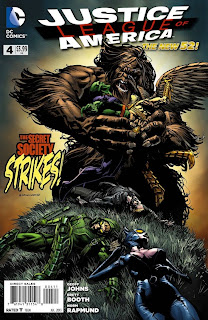 Okay onto Justice League of #4, another disappointment. I have less disappointment with this book as my expectations of Geoff Johns are low and David Finch never stays on a book for any length of time. Still when a series is launched with the creative team announced I would hope they would be on it for the first arc. We are on issue #4 and Brett Booth is the artist. Brett does a good job, but it still sucks that there is not even continuity within an arc on a comic at DC many times. Next complaint is how young these character look. Green Arrow is younger then the guy playing him on Arrow TV show. We are supposed to think Vibe and Stargirl are younger but they appear to be close to Ollie’s age. It takes a lot away from the characters. Recently a friend of mine said he feels DC books are almost being written for 12 year olds and now that he pointed that out I’m seeing a “dumbing” down on a lot of their books. Last and not least is the point blank bullet to the head of Catwoman. She is very, very dead at the end of the book. And of course we know it isn’t true or there is a resurrection method (see Suicide Squad samsara serum), so the impact is unbelievable. Again I have been at the party too long, no comic book death even makes my pulse race even a little. For the record I have a very low pulse rate, often fewer than 50, so maybe it is harder to get mine racing.

The back up story about the Martian Manhunter by Matt Kindt  and Andres Guinaldo was better then the front of the book. That is never a good sign. It did have a minor hiccup as the Manhunter says he needed to do a task to learn what it was to be alone, but then also said the Martians had no work for alone, yet to be the leader you needed to learn how to be alone. Felt like a Catch-22 to me.

Next part is just a little bit of me ranting about DC for Part 2,