I’m growing very tired of the weekly grind. I have constantly toyed with the idea of quitting the blog altogether. As of August 24 it will be seven years ago that I started the blog. I will have to discuss with Lee, Thomm, Matthew and Shawn more about my plans. I think I want to jump to a format that is a little more spontaneous. In others words no set schedule for when I post. I’m just playing out my thoughts. In many ways I think I have said what I want to say about comics, yet I’m opinionated and always have something in my head to say about a comic as I’m reading it. I also keep exploring different ways to approach how I talk about a comic.

Alright enough rambling, here are the requisite lists for next week’s books with the clean list at Cosmic Comix and the detailed list at Midtown Comics. Marvel comes in the lightest for me with only Alpha, Guardians, Thor and Wolverine. DC actually does okay with me next week as I have decided to try all the GL books with the new writers and Snyder has his Superman book out next week. Who scheduled this crap? DC has Batman and Superman Unchained coming out the same week. Otherwise I’m picking up American Vampire (back for a one shot I believe), Demon Knights (cancelled), GL Corps try out issue, Stormwatch HC (Warren Ellis stuff), Suicide Squad, Threshold (also a cancelled title) and the Batman and Superman books. The Alternative Press win the week as it often does (and American Vampire should be in this category) with Walking Dead, Doomsday, Half Past Danger (great fun), Thumprint, Black Beetle, Breath of Bones, Star Wars, X, Shadow, Six Gun Gorilla (had to try it), Stuff of Legends and Harbinger Wars. I’m very curious about Superman Unchained. I think Snyder’s Batman has been good to great, but not the best ever and I’m not a big Jim Lee fan. It all adds up to limited expectations about the Superman title. No matter it has to be better then the other books since I won’t even picked them up.

Onto the reviews or thoughts I had about books I read this week. This part of the series of posts I want to talk a little bit about what themes intentionally or unintentionally Marvel is writing about in some of there books. 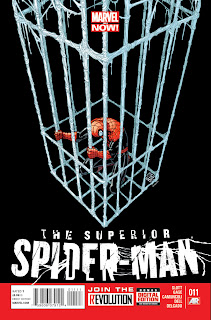 I’m starting with Spider-Man #11. I realized the book is making an interesting point about what it is to be a hero. Peter is now gone and Otto is totally in charge. The book has become more vibrant and alive then it has been in a long time and brought me back into the fold. The reason is that we have the illusion of change and what a great illusion. It is Peter Parker, but he is no longer the Peter we knew, it is now his greatest enemy taking over Peter’s life. Otto seems to be better at it in many ways and is perhaps still a little too aggressive in other ways. From what I have seen the sales are sky high and maybe Otto remains Spider-Man for a long time. Heck he is Peter Parker, so the change is internal and plays to the comic fans while keeping the corporate masters happy. The question becomes what makes someone a hero. Is Superior Spider-Man a hero? Doc Ock is an acknowledged mass murderer and was for many years (in comic books years it may only be about 10, but heck he still killed a lot of people). Is this a story of redemption? Is there no limit to the bad you do that can be at least mitigated by now doing some good? How is it that Doc Ock is now totally in charge and still being a good guy? Does the Joker get a chance to redeem himself one day? I find the story interesting because I’m not rooting for to win, but I have noticed that we are ratcheting up the level of the bad guys. They are worse then ever. How does this play out when Peter Parker himself returns (or will the 2099 Spider-Man be the Superior Spider-Man for a year? It also points out that Peter Parker is no longer interesting. Like reading my opinion on certain things, you know what they are by now and if you are a regular reader you are possibly bored in hearing it again. Have we become that way with Peter Parker? Is the hero who does the right thing no longer exciting? What does that say about us as readers, just excited for a new take or do we have a desire to see things in a harsher light? 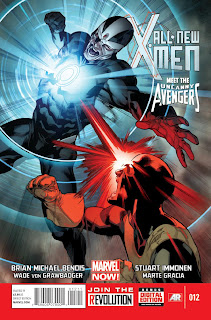 Next up is All New X-Men #12. This issue the Original X-Men meet up with the Uncanny Avengers. It points up the fact that Scott Summers today is considered evil and bad because he killed Professor X, yet the Scarlet Witch who almost performed genocide against mutants is considered okay and fine to be an Avenger. It points out the insane premise Marvel has tried to sell us the Scott is a villain, yet all the other heroes that have committed mass atrocities for one reason or another are given a pass. Wolverine is at times my favorite Marvel character but remember Enemy of the State by Millar? Wolverine had one heck of a body count and now he is a favorite of everyone and runs a school. Yes morphing characters into whatever you want is the order of the day. Gone are the times when characters would be established and act in character in a situation. Now it is make then into whatever you want them to become? Of course that is why Peter Parker needed to be given Doc Ock’s brain because he was firmly entrenched as a certain character. You could not make the radical changes you can with less set characters without losing the audience. A good writer tries to give us motivations for why a character may act a way they do, but people don’t change quite as radically as many of the X-Men have done over the years. Still the theme in All New X-Men and Uncanny seems to be about the idea can an evil be redeemed? Apparently Scott Summers act is beyond redemption in some characters view point. Is Marvel Girl going to find out what she did as the ? Which brings up another question, how can these people be heroes at all? Can I go and blow up something and say I was possessed, but now I’m fine? I’m guessing no. The comic book plots have been played over and over again which causes these insane things where the Scarlet Witch possessed by the sprit of creation or whatever is now okay, but Cyclops possessed by the force, not so much. 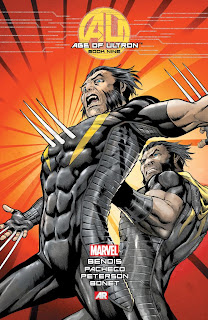 The last book for Part 1 is Age of Ultron #9 (of 10). Wolverine goes back in time and kills Hank Pym to save the world. It doesn’t work, the world ends up being a worse place. Wolverine goes back in time and stops Wolverine from killing Hank Pym. Hank is told about all that happens and he is going to fix the problem by building some back door program that will stop Ultron before he actually wins. Hank can’t remember any of this, so it plays in well with Ultron wiping Hank’s memory way back in an early Avenger’s issue when he built him. As a side note I love how once a Marvel character is a super genius no scientific discipline is unknown to them. Wolverine goes out and kills Wolverine (I guess he knows how to defeat his healing factor). Anyway, besides all the time travel insanity and cute comic book time travel logic that will resolve all of this and somehow bring in Gaiman’s character into the MU (and who cares), we get another view of what is a hero? (Damn but this is one long run on convoluted sentence). Is Wolverine a hero who will do whatever it takes to save the day? Or, is he just a brutal murderer who can’t think his way out and only knows how to be a weapon? If the later, how can we celebrate him being a hero? At one point he was an anti-hero and a character that pushed the limits. He would kill if needed, but over the years he has now been often just played as a man willing to kill anyone for any reason that he feels is justified. Reminds me of our government willing to determine who dies because they MAY attack us. We are bombing people in rural and making more terrorists everyday, IMO. Sorry for the political aside, but this book has made me look at Wolverine and wonder is he a hero? Is this a book I would have wanted my kids to read?  It is also a book that is trying to serve a lot of masters as they are shoe horning bringing the Gaiman character into the MU for no reason, using it to launch a new series or two, revamping Hank Pym and I think dropping a hint about Wolverine losing his healing factor.

Still I like that a comic can often cause me to stop and philosophically debate stuff, even if it is me versus me. What is a true hero? Are there absolutes when it comes to right or wrong? How much wood could a wood chuck chuck if a wood chuck could chuck wood?

I don’t have the answers, I have the questions. I remember that Jim Shooter infamously made show the characters Wolverine killed attacking the Hellfire Club as still being alive in a future issue. I was opposed to that, as the guys he killed were killers themselves. In a war, killing is often needed. There are limits to that philosophy and I’m guessing Shooter saw a slippery slope that he did not want to go down. Maybe he was right.