Okay I’m officially “retiring” from the blog after next week’s post. This does not mean I quitting the blog that I started almost seven years ago this August. What it means is I’m no longer working under a deadline. I will post a review, rant, nomination for the Comics And Hall of Fame and other diatribes about comics, but will not worry about when I actually do a post.  A few years back I turned over management of the blog to Lee, who has been with the blog almost from its inception. What he and the boys plan to do in the future will be their decision and I’m sure they will let you know. Please dry your tears; I will still be here, just not on a schedule.

Of course before we jump into any remarks on last week’s books, we need to give you next week’s list. The Cosmic Comix hook up for the clean and simple cut and Midtown for all the details and list of variant covers you could want. Next week brings the new 100 Bullet mini-series, the final Age of Ultron (click on link for a fun send up of the ending), Dream Thief #2, Captain Midnight #0 ( that name sounds dirty), Wild Blue Yonder #1, Invincible, Harbinger, Bloodshot, Wonder Woman, Superior Spider-Man and many more. It looks to be a good week.

Okay I called this segment Scott Snyder week because he has three books that came out, Superman Unchained #1, Batman #21 and American Vampire Special (under Vertigo). I hope that Snyder is making a boatload of money because without him DC has nothing. Batman has been a top selling title under his pen and now after probably five years we have a readable Superman comic. Add to that the nice one-shot to tide us over while the series is on hiatus and you have three very good comics in one week. If Snyder is not at DC, Batman will still do okay and was great under Morrison, but it will not be the mega hit it is now. Superman will of course be continued to be published, but it will be most likely more of the same trash that has been put out there. Finally without Snyder, there is no American Vampire. 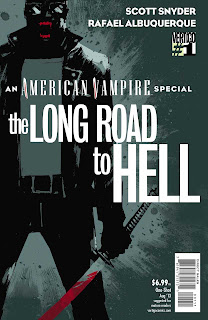 American Vampire the Road to Hell was a great one shot. It was also a spotlight for artist Rafael Albuquerque because he co-plotted and scripted the book. I think Rafael maybe only the third person outside of Snyder and Stephen King to script an AV story. It was an extra long issue that told the story of a young couple who are turned into Vampires and how they still managed to have a happy ending before their final ending. It featured the 50’s greaser type as a Vampire hunter and introduced a strange little boy who I think maybe prominent in the next story line when AV comes back. A terrific read and a book that while pricey at $7 still delivered the bang for the buck with an extra issued and a very good story. 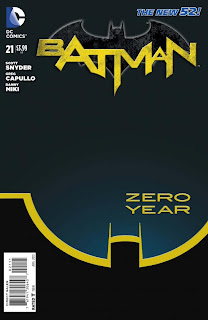 Batman #21 was Part One of Year Zero, which I understand is to be eleven months long. Since we have a villain month coming up, that takes this book out of current continuity for a year. It was a very good issue. I’m enjoying Scott’s run on the book and with Greg Capullo’s art the book is drop dead gorgeous. There is a lot to like about this book as we are seeing the time when Bruce is now back in , but has yet to adopt the Batman persona. You can also see how deep Scott has thought out Batman’s background as he layers in bits and pieces that he has crafted with the long family history. It is truly an excellent comic and in some ways his best issue to date on the book.

My problem is I still continue to have major problems with the Batman series. I hate to blame Scott as he is going forward with the cards he was given by DC. The issue is those cards feel like he is trying to pull to an inside straight (poker players will understand). The first thing that sucks is the book starts six years ago. Bruce is in a prototype Batman uniform and then we jump five months earlier. This is a problem for me because I went to a presentation before the new DCU was launched and Didio and company were telling retailers (I was a guest) that the Batman continuity was only going to be tweaked as all was good as it is. When the new JL was formed and it was five years ago and all the heroes were new, we were told Batman has been operating for awhile but in the shadows. Now we have firmly set up that Batman has only been around six years. It does not jib with having four Robins, the long history that was intimated with the Joker and many of the other stories. You can’t have Batman being all that he is presented to be and still be 27 or whatever they are trying to make him. Bruce has to have some gravitas to him that comes from age and experience. It is like cramming a six people into a smart car, it doesn’t work or it is very, very ugly. This may not bother others, but for me it is a constant thing taking me out of the book. I keep wondering, how does Bruce have a ten year old son Damian if he only started six years ago?  It would have worked better for me if the whole new DCU had more thought behind it and maybe just now Dick had split off to be Nightwing. One last minor point was the back up story. Bruce is shown how he learned how to drive the way he does. It is very entertaining and fun, but I kept wondering, if Bruce is dead, who the hell is funding these adventures?

Even with all of my gripes and complaints, Batman is a very good series with great artwork and is one of a very few DC series that should not be missed. 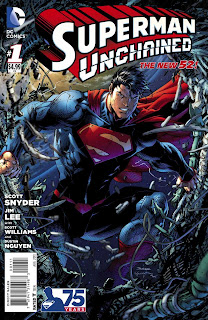 Now we come to why DC should be kissing the ring of Scott Snyder, Superman Unchained #1. I can’t believe I read an in continuity Superman comic and actual enjoyed it. It has been a very long time since that has happened. All Star Superman was not in continuity. I would say it was the Johns/Frank stuff that was the last good Superman work that was done at DC. This issue had the stunt with the poster size page embedded in the book, which is another DC weakness. They are more focused on marketing stunts they producing the best books they can. Fortunately that is not the case with Snyder as the story read great. It showed us Superman in action, gave us the traditional supporting cast (not sure who they are in other books) and gave us a great mystery to be solved over the course of the story. Jim Lee’s art looked good, but you know he is not going to be able to stay on this book. Realistically Jim Lee is too far up the corporate ladder to commit to a monthly book. DC should assign some of John’s favorite artist to Snyder and let Ivan Reis work on this book. Anyway it is now safe to read a Superman book and based on the first issue this story should be excellent. Thanks Scott for making Superman a book I can read again.