Recent Reads from Wed May 29

What I lack in verbose commentary this week I hope to make up in sheer numbers.  Below you’ll find some (very) brief blurbs on the ten books I got this week.  I was going to put them in the order that I read them, but I’ve already forgot! 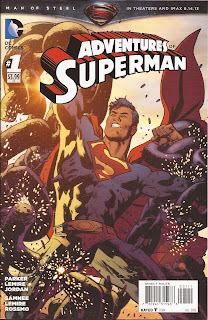 I think this is a one-and-done Annual-sized title, but I sure wish it would continue because Superman is wearing underwear again!  It reads like tales from the post-Crisis (New Earth) universe and that suits me just fine.  The opening 10-page story by Jeff Parker and Chris Samnee is wonderful and features the best sequence of the week…Superman punching himself in the face!  It could have easily been an old issue from the Animated Series.  The second story by Jeff Lemire features two kids playing good guy versus bad guy and the best part is the images of classic pre-Crisis villains.  The last story by Justin Jordan and Riley Rossmo is a Bizarro story and “Me Loves Bizarro”.  It’s okay.  The most distracting part was that the colorist gave Superman a collar.  Wrong Universe! 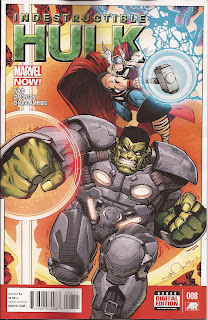 This was my favorite chapter of the three-part arc with Simonson art.  I liked the characterization of Banner’s team of scientists and the explanation of why certain people can’t lift Thor’s hammer.  Walt can draw Coulson’s likeness very well too.  The only part I didn’t like was Banner’s definition of Faith.  I miss the days when he actually prayed to God. 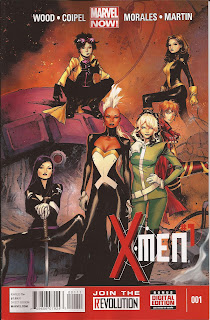 Oliver Coipel is certainly one of the best artists in the business.  I loved Jubilee’s facial expressions.  The train derailment sequence was very cool.   Good start for the series. 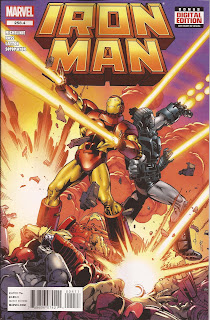 Nobody can ink Iron Man’s helmet better than Bob Layton.  I enjoyed the four-part mini-series, but I’m not sure how it fits in with the original continuity, since Rhodey doesn’t get his War Machine armor until much later.  Does that mean this replaces numerous issues?  I hope not, because I like it better as an untold tale, not a retcon/rehash.  The carrier pigeon messages dropped from Outer Space was ridiculous. 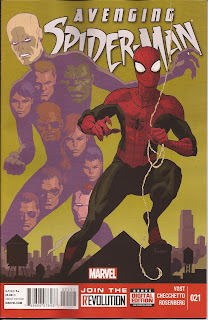 What happened to the Chameleon?  He cuts people’s faces off now?!  How can he even do it so quickly?  I would think that would take some time.  This was almost a total retread of the Hulk in the Helicarrier scene from Avengers and that was very annoying!  Chris Yost can do better than that.  At least the art by Marco Checchetto was still exceptional.  The best part was the last page. 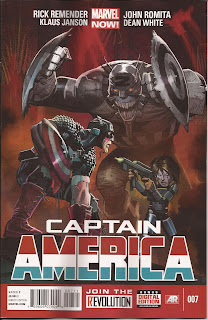 This book wins the prize of worst cover of the week.  Not because it’s a “bad” cover, but because it spoils the final splash page.  Hmm, I wonder if Steve’s son is going to turn on him.  The punishment that Steve endures is really stretching credibility even in Dimension Z! 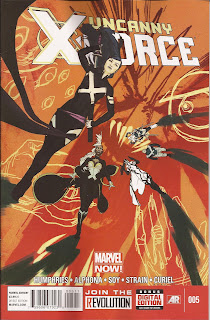 I missed Ron Garney this issue, but the fill-in artist was a good choice for the bizarre dream world Storm and Psylocke were stuck inside.  The story is moving slowly, but I do like the gelling of the team members.  And my digital customers seem to like it a lot (meaning higher sales), probably because it’s not the top tier X-Men book. 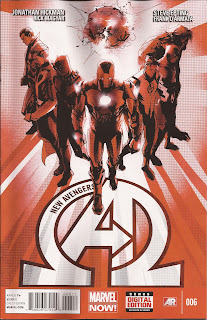 Steve Epting really sells this book for me.  His rendering of Doctor Doom, especially on the last panel is chilling.  I don’t really like what the Illuminati are doing and the compromises their making, but Hickman’s story is intriguing and much, much better than his one in Avengers (except for issue #11).  So, do they ever let the Black Swan go to the bathroom or shower?  She looks so put together. 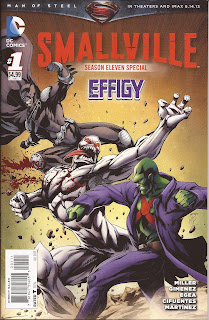 Another “Annual” that only features two pages of Clark.  We basically get a Martian Manhunter/Batman team-up.  It was well done and a good compliment to the series.  I really liked John’s green civilian shirt and double holster that mimics his super-hero outfit. 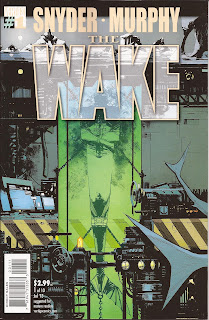 BEST BOOK OF THE WEEK!  I really enjoy Sean Murphy’s art (despite his I’m sure it would’ve been to me offensive Punk Rock Jesus).  I’m probably most impressed by his architectural renderings.  There aren’t many who take the time to do that stuff anymore (at least by hand).  Scott Synder has crafted a really enthralling story.  We get a future sequence, a present sequence 200 years earlier, and a past sequence from cavemen times.  Other than a few colorful metaphors, there was nothing objectionable in it for me, so I plan on sticking around for the next nine issues.