I'm going to tread some old ground here because it's taken me about a decade to get around to reading this book.  Mind you, it wasn't published in this format originally.  In fact, it was originally in French, which is more than a little of an impediment for me in reading, but it's been in English about 10 years.

I'm not going to waste time talking about the high quality of the art and the storytelling.  This thing has more than enough awards and reviews that if you have the slightest interest in reading a wide variety of comics genres, you've no doubt come across these.

Instead I'm going to say that you shouldn't read this with the idea that you're going to learn what Iran is all about.  That's not what this is.  This is Marjane Satrapi's story from 1979 through September 9, 1994, when she left Iran for the last time.  It's a nice entry point for Western readers because her family is so Western oriented, but it doesn't tell me anything about how the larger majority of Iranians think and feel.

Satrapi's family is upper crust.  They claim descent from a 19th Century Shah.  They tend toward Marxist thinking.  Oh, they have plenty of pride in being Iranian, as all Marxists seem to have their nationalist bent, but they dress Western, indulge in Western habits of drinking and partying, and have a wide base of knowledge of the world and literary works.  Even as a child of 8 or 9 Satrapi was engaged in reading heady works and making efforts to participate in the political discussions of the adults around her.

Post revolution, Satrapi is forced to wear a veil like all the other women in the country.  People who disagree with the ayatollahs start disappearing if they're too vocal or too active.  Her formerly active parents are eventually scared into silent obedience.  An uncle who was more active is killed.  Satrapi's own outspokenness in school, and slugging a principal, eventually leads her parents to send her to Austria for high school.  Returning to Iran afterward, and now being an outsider wherever she goes, Satrapi marries, goes to art school, divorces, and leaves for France, where she still lives.

It's a great story of her own coming of age and alienation in two cultures.  In many ways she's a contrarian, which I can certainly admire, being one myself.

What she can't tell me is what the majority of Iranians are thinking.  She 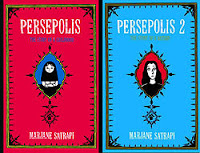 doesn't seem to have much contact with them.  There's the occasional interaction, largely via a maid's family in her younger years.  Most of the young boys sent to the front in the Iran-Iraq war, whose primary function was human mine sweepers, were from poorer neighborhoods.  Most of the bearded men and veiled women who harrass people to comply with the strictures of public appearance, and even raid homes for private non-compliance with the mandates of the ayatollahs, are from poorer, uneducated families.  They're fairly one dimensional abusers of power, though.  What do those people think of the ayatollahs?  I wish I knew.

It makes me suspect Satrapi's perception when she, in 2005, said that Iranians and Americans are very much alike, and their governments are, too.  I can buy that the people have plenty in common when it comes to the basics of wanting security for family and friends.  Those are fairly universal urges.  Beyond that there are some significant differences.

Throughout Persepolis there's constant talk about the regime celebrating martyrs, and even secularists like her family fall into the martyr thinking trap.  There's no such thing among Americans.  The closest we get is guys like Nathan Hale.  However, Nathan Hale died for his principles at the end of a hangman's rope, not blowing up civilians.  George Washington didn't send 14 year olds out to be cannon ball catchers so the more skilled troops behind could get through more safely.  Any boys that age in the army at that time were more likely to be drummer boys and the like.  They won't be found in today's American army at all.  Ideas about kids under 18 serving having changed quite a bit in 200 years. 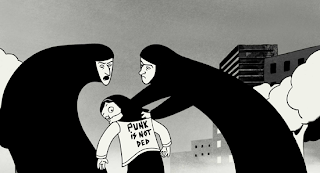 There's also a lot of talk about the injustice of the Arab invasion of Persia by both the authorities and Satrapi's family.  They're talking about 1400 years ago.  They're holding a grudge about an invasion 1400 years ago.  Really?  You know how we handle past wars in the US?  We become allies with our former enemies.  England, from whom we separated and with whom we fought two wars from 1776 through 1814?  Closest ally we have (with the possible exception of Canada, who we also invaded in the War of 1812).  Two wars with Germany and one with Japan in the first half of the 20th Century?  Close allies today.  Hell, we fought our longest war (until the current Afghan war) with Vietnam.  We're not tight, but we're at least friendly these days.  Our veterans of that war, who suffered a lot, make trips back to sympathize with our former enemies, who also suffered a lot.

I just can't buy into Satrapi's contention that Americans and Iranians are that much alike when there's such the celebration of the martyr and the holding of the grudge.  To say that our governments are alike is even more of a stretch.  Now, I'll give her a little leeway for having made the statement in 2005 when Bush II was president and the GOP held both the House and Senate.  Guatanomo was a torture ground and rendition for even more torture by cooperative dictatorships was still considered a reasonable policy.  But even then there were vast differences.

No one who disagreed with Bush II disappeared in the US.  Hell, dissent wasn't even tamped down in the least.  There was a robust, vocal opposition that had no fear whatsoever of jackboots in the night.  What's more, the opposition openly and actively worked to overthrow Bush II thinking.  That sort of thing is encouraged in the US government structure.  It's called free and fair elections.  And sure enough, in 2008, a different way of thinking came to power.  In fact, it had already started in 2006 when the Democrats took back the Senate.  By 2010, the GOP had taken back the House.  It's a constant flux in the US.

On the other hand, there hasn't been a single change in Iran since 1979.  The ayatollahs have ruled throughout.  They have squashed any dissent with violence and oppression.  When street demonstrations arose in opposition, they acted just like the Shah and shot people in the streets. They conduct sham elections where only candidates approved by religious counsels are allowed to run.  It's no wonder a friend of mine who was in the US in 1979 never went back.  Sure, he has pride in being Persian, even naming his kids after figures in Persian myth and legend, but he's not about to head back to Iran where he runs the risk of never getting out again.

No, there's no similarity between American and Iranian governments, though, ironically, the Know Nothings seem to think so.  But that's a discussion for another day.
Posted by Thomm at Friday, May 31, 2013