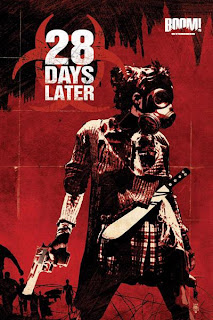 And now for something slightly different, a review of a series! Why? Because, while waiting for the next Walking Dead trade I decided to read the second best zombie book on the stands. Over the weekend I read 28 Days Later Vols 1-4, written by Michael Alan Nelson with art by Declan Shalvey, Leonardo Manco, and Ale Aragon, published by BOOM! Studios.


The series is based upon the movie of the same name, which was originally released in 2002 at the beginning of the zombie craze. The zombies in this story aren’t dead. They’re normal people infected by a rage virus that turns them into bloodthirsty killers. The infected run and jump like normal people but a bullet to the chest will kill them as easily as a machete to the head.

There are three things you need to know prior to reading this story: 1) the zombie plague started in London and quickly infected all of England; 2) the rest of the world quarantined the British Isles to prevent the spread of the disease; and 3) at the end of the movie there were three survivors that managed to escape to the European mainland.

This books starts when a reporter finds Selena, one of the three survivors from the movie. The reporter has gathered a team to sneak back into England and find out what is really happening there. As he states, "the people deserve to know the truth of what happened there and the government won’t tell them." Selena agrees to become their guide and so begins the journey to break into the most dangerous place in the world. And that’s just the first 4 issues (Vol 1). 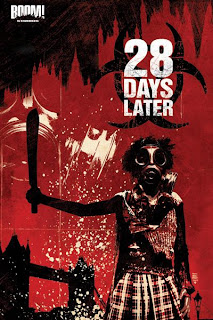 From there, they get trapped in Scotland with no car, no supplies, one machete, and nine bullets. In short, things weren’t looking good but our adventurers are going to London and nothing is going to stop them! Nothing except increasing levels of bad guys along the road. Our heroes manage to find a pocket of survivors but they aren’t all that friendly. Then they manage to find a city of survivors and they really aren’t that friendly. Heck they even manage to find a couple of scientists with military support who are studying the infection in order to weaponize it. They really, really aren’t friendly. This is the story of the world’s longest and worst road trip ever!

In this series, Nelson writes one of the fastest paced zombie stories you will ever read. Unlike other zombie comics, there’s never a “let’s sit around and analyze our feelings and moan about the loss of the world” issues. Nelson quickly moves the characters from one event to another and uses quiet times walking down the road for character development. This creates a balance between the action and plot without slowing down the pacing. Nelson does a great job of exploring the concepts of the 28 Days Later world too. In 28DL, only England has zombies, not the rest of the world. It’s very believable that the military would try to capture some zombies. It’s very believable when survivors question why nothing is being done to help them. It all flows together very naturally and that keeps you turning pages to see what is going to happen next. 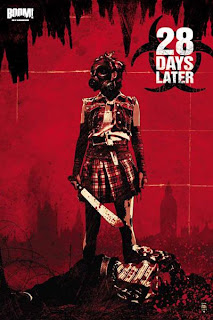 The art throughout the 4 trades is always good yet never great. Shalvey handles the majority of the story and his style reminds me of Charlie Adlard or Sean Phillips with heavy blacks and chunky figures. Shalvey does a good job of keeping each character distinct and his story telling chops are good enough that you never get lost. Aragon handles the art in Vol 4 and the art goes from good to ok. He’s looser with his lines but his blacks are just as heavy. It makes for an odd visual, but like Shalvey, his story telling chops are good enough to get you through.

28 Days Later Vols 2-4 was the second best zombie book on the stands for a long time. The series concluded last year but you can still enjoy it in trades. If you want a great zombie story to hold you until the next issue of Walking Dead comes out then this is the book for you.

You can find all the trades here.