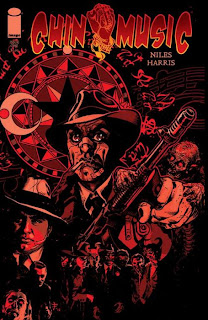 Chin Music #1 by Steve Niles and Tony Harris is off to a good start that is a little confusing. I love Steve Niles, the man is a writer. He writes for Image, DC, Wildstorm, IDW and anyone else who will publish his stories. The old saw that a writer writes fits to a “T”. He appears to always be writing and has another story in mind.
This book is another mixture of the supernatural and the classic PI Noir type of story. Like the movies which seem to turn out similar projects at the same time, comics and TV also have that tendency. It is more pronounced to me as I read both this and Ten Grand in the same week.

The story opens with our PI scratching runes into his bullets. The time frame appears to be the late 30’s. He sticks a gun out a window and fires. We then flip to what appears to be a Middle Eastern country. Some form of mystic battle takes place and a skeleton is still alive and crawls away after losing the fight. He is told that if he interferes again they will track him down and kill him. He looks dead to me already.

Next we jump, I guess back to the as Elliott Ness finds the skeleton man in the middle of a road. He helps get him an ambulance but it is empty when it gets back in town. We switch to Al Capone having dinner and as he stands up his head explodes as it is hit by a bullet.

As I wrote the summary of the story I guess it is not really confusing. Elliott Ness is possessed and we can guess Al Capone and other bad guys are possessed by his enemies. The war between the law and the mobsters in the 30’s just got a new element thrown into the mix.

Tony Harris work is always great to look at. He conveys all the story elements needed and has a great stylistic feel that makes it distinctively his work. The dark color palette makes sense, but at times I felt it was overly dark.