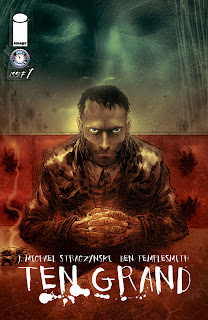 Ten Grand #1 is another cheat from last week, but what the hell this was a great start. J. Michael Straczynski has revived his Joe’s Comics imprint and has gotten Ben Templesmith as his artist partner for this book. I think it was a brilliant move as Millar has shown that a great artist can elevate any script and make it greater or add to its greatness.

Once you have read as many stories as I have it is hard to not read something and say it reminds me of this, this and this. It is a function of being a fan of stories via comics, TV, movies and books and then multiplying by my age. Ten Grand is about an ex-hit man trying to pay off his debt to heaven to buy a few minutes with his dead wife on occasion. A little Hellblazer mixed with a hard edge noir character and the assassin with a heart of gold. This thing could have easily been a train wreck as all the disparate elements have to be put together right to make it work. JMS and Templesmith pull it off.

I know JMS has been a lightning rod for some creators to cast disparaging remarks at him and I’m sure some has been earned and some are totally unfair. All I know is that there is a lot of his work that was very enjoyable. He has done Midnight Nation, 5, Changeling, Spider-Man and The Twelve to name a few. All in all this looks like another winner.

Now I would be remiss if I did not say that without Ben Templesmith I’m not sure if this series would have work. His dark and moody art and scratchy style enhanced the story every step of the way. I would have to guess that Ben added a lot of his own story telling into this book and the JMS is smart enough to know how to write to an artist’s strength. I could feel every bit of Joe’s pain and remorse for the life he lived and the love he has lost.

Joe is now sort of a private eye that wants ten grand for any case that he takes. This case harkens back to the tragedy that ended up killing him and his wife.  So we set the premise and get an origin story all at the same time. It even has an audio file that you can scan with a QR and listen to the book if you would like. A great product and a great re-launch of Joe’s Comics.