I have to say that this side of the weekly haul of books gets better and better. Not only with what is out, but the projects being announced are great. Fraction and Chaykin on Satellite Sam, Rucka and Lark on Lazarus. 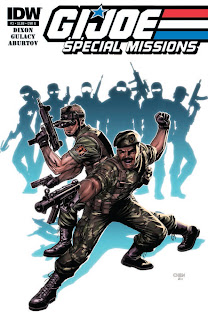 GI Joe Special Missions #3 is a guilty pleasure. This book I picked up for the creators as Chuck Dixon is a top notch writer and Paul Gulacy is an artist whose work I enjoy. Now I know Paul’s style is not one to please everyone, but I own two pages of his original artwork. I have always loved the cinematic feel he brings to his work. Chuck Dixon has long been a well regarded and very good comic book writer. I think Chuck is one of those writers that never received the acclaim he deserves. This story is about the Baroness trying to get back into Cobra’s good graces and a GI Joe team trying to stop it. Normally I could pass on this type of book but and Gulacy make it a fun action / adventure.

Green Horner #2 by Mark Waid and Daniel Indro was a good read. Again I can usually pass on a Green Hornet book, but with Mark Waid’s name as the writer I wanted to give it a shot. Mark is crafting a nice story showing us how the Green Hornet establishes himself as a bad guy. Waid is also giving us an idea of how Britt uses his position as newspaper publisher to further his war against crime. At the same time you can see Britt’s arrogance is going to get him in trouble as the unknown big boss in the background is outplaying him. Indro’s art is decent and is slightly better then average. Dynamite in general seems to have heavy handed coloring and often I think it is to cover up some of the less then stellar art. Still more and more Dynamite books are on my list. 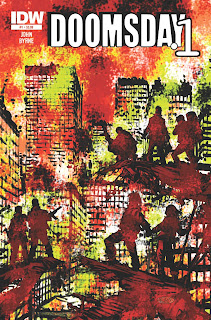 Doomsday.1 #1 by John Byrne was entertaining. I believe this is a remake of a story John did many many years ago. Since I never read that story it is all new to me. The first issue is setting the premise as a group of people are on a space station and avoid the solar flare that destroys the Earth. We are now following them as they land to see what is left after the apocalypse. The proof will be over the course of the mini-series, but it was a good start.

Bloodshot #11 was a decent read. The problem I had with the book is it covered too much of the same ground that had been covered in other issues of the Harbinger Wars event. It’s a tough call when you have a series that is part of an event as to whether the issue should remain true to the series or be a chapter in the event. Valiant is small enough and the event is contained enough that I believe each book should be a chapter in the overall story. That being said this was a very good issue as we saw some of the same events but learned more about Bloodshot’s point of view and what is going on with his programming. More and more I’m wondering if Bloodshot was ever a person or is he just a machine. 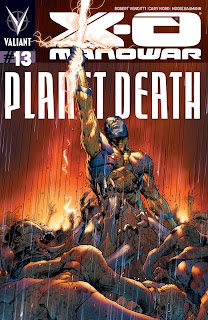 X-O Manowar #13 was another good issue. Robert Venditti is apparently having a blast letting X-O reconnect with his people and fight against the Vine. Nord’s art is perfect for this story. What is not to love when you have a barbarian in a science fiction space adventure? Aric’s scorched earth tactics against the vine was just a great scene. Valiant has a winner with this character and creative team.

Victories #1 by Michael Avon Oeming was okay. This is a last week book, but hey it is what I read. After the mini-series I was through with this book, but I took a flier on the first issue of the unlimited series and I’m glad that I did. This was more about the entire group and I learned more about the members of the group in this one issue then I did during the entire mini-series. One thing which would be a help is a quick picture of each member with a brief heads up of who they are and what they can do. This issue the world has gone dark (shades of Revolution) and yet super criminals are still trying to steal. The Victories are there to save the day and a great battle ensues. During the battle we learn a lot of the charter “DD” and we get an excellent cliff hanger. Mike’s art style is not going to please everyone, but his story telling is excellent. 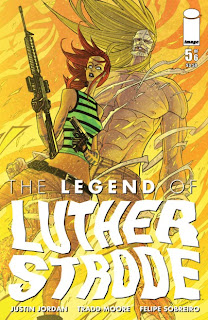 Legend of Luther Strode #5 (of 6)  by Justin Jordan and Tradd Moore is more of the same. Issue after issue this is a violent and over the top story.  The ending was great as breaks through to Luther and he reconnects with the world. They celebrated with a big two page spread of Luther and kissing. It was hard not to smile when you hit that part of the book, but we still have one more issue and Jack the Ripper is still out there.

Buy it, or wait and get the trade at this point.

Fables #129 is included here as it sure as hell is not really a DCU book. Bigby is dead, what the hell is this?  Loved how it all tied back to Therese getting back home all grown up. Fables is still a very good series, does not quite have the same pizzazz that it used to have, but still rock solid.

Fatale #14 is the last in the stand alone issues and brings us full circle as we catch back up with Josephine. This story is a prelude to the beginning of this series. Brubaker and Phillips have crafted a very good series that has as its star character a woman possessed of powers that are dark and mysterious. The funny thing is 14 issues in and we still don’t have a clear idea of why the cult is after these women over the years. What threat is she to them? What is the cult’s goal? Even without knowing that I have enjoyed the stories being told. 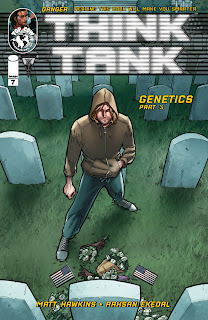 Think Tank #7 is another great issue. I’m still and probably will never be a huge fan of Rahsan Ekedal’s art, but Matt Hawkins tells a great story. This issue Dr. Loren’s manipulations of events end up costing the live of the Colonel who was more or less his protector and warden. Matt is imparting all sorts of information in this issue and it is often weighted down with a lot of text and a lot of jargon, but he makes it entertaining as hell. This is a great series that is thought provoking, educational and entertaining.

Peter Cannon Thunderbolt #9 is a solid read. The problem I have with the series is that it is not new reader friendly and Peter often feels like he is going around in a dream. Even when something is “real” I not sure if it is real. I question why I’m getting this book, but as obtuse as the story line and plot is at times, it is the most intriguing take I have seen on this character since Alan Moore made him over into Ozymandias. The art is well done.

Borrow it from a friend.

That is a wrap for this week and next week is anyone’s guess as I’m off next week attending my nephew’s wedding and just gallivanting around for a few days.
Posted by Jim at Tuesday, May 21, 2013