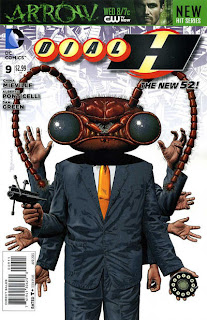 Recently, Jim, tired of me contradicting his assessment that most of DC sucks, sent me some books in an attempt to prove just how bad DC had gotten.  His examples was Dial H for Hero 9, 10, and 11!

What made this series so good?  Read on and find out!


Dial H for Hero 9, 10, and 11 were written by China Mieville, illustrated by Alberto Ponticelli, inked by Dan Green.

Dial H is one of DC's older concepts.  Very simply, it's the basis for a cartoon called Ben 10 with superheroes instead of aliens.  Issue 9 starts as the villain has stolen our heroes dial.  Things look bad until his sidekick manages to get the dial back and uses it to save them.  So starts the story that has a little romance, a lot of action, a very devious bad guy, and even secret government agencies. Dial H has something for everyone! 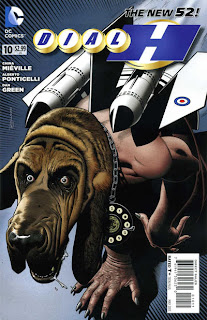 There's really a lot of concepts floating around this book but what amazed me is how accessible it all was.  I started with issue #9 which is typically nothing close to a jumping on point but I was quickly sucked in.  Mieville made sure the characters used each others names so I could quickly identify them.  He made sure the villain had just enough monologue to catch me up on his powers and motivations.  He made sure the characters recapped what they learned from prior adventures because they were fighting a secret government organization.  In short, Mieville made sure that I had all the pieces I needed to enjoy the issue.   It was a perfect!

Because I was able to relate... well maybe not relate but at least understand the main characters I was able to enjoy all the crazy stuff going on in the story.   Mieville stuffs so much this book full of crazy stuff so much so that it reminded me of a main stream Morrison Doom Patrol.

For example, at one point, the bad guy, at the behest of his superiors in the gov't puts on a giant bug head so he can have a secret identity.  That's right, the cover to issue 9 actually appears in the book.  YES IT'S AWESOME!  It's a ridiculous idea that Mieville plays it straight which makes it work. Another example is when our hero dials and becomes The Glimpse because he needs to be sneaky.  In a fine bit of trickery and showmanship, The Glimpse is not invisible but he never appears directly on panel either... because... wait for it... you only catch glimpses of him.  Stupid?  Absolutely!  Executed to perfection to make you smile and enjoy the whole sequence?  Oh yeah!   And this is only issue 9!  Issues 10 and 11 are more of the same and they manage to 'world build' the Dial H concept at the same time.  It's excellent. 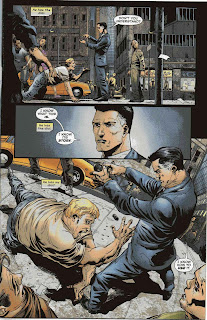 Finally we have the art.  Ponticelli is one of those artists that people love to hate.  Personally, I think he's been in a slump the past few years but not so here.  In this book, Ponticelli is spot on!  Let's look at the first page of issue #9.  There are three panels.  The first sets the stage, we in the street.  The second is a close up of our bad guy.  The third?  The third panel is all wrong.  The people are distorted.  The perspective is wrong.  UNTIL!  Until you realize it's a fish eye lens.  That fish eye lens makes that 3rd panel fantastic.  We supposed to see the weakness of our hero (in case it wasn't obvious).  We supposed to see just how big and bad the villain is.  And the panel achieves it masterfully.  Ponticelli obviously brought his A game to this book.  The rest of the pages are more of the same, set up panels leading the eye all over the place.  Distortion when necessary.  Close ups and far shots and worms eye views all mixed up to make each page fresh and exciting.

I can see why the series is floundering.  It isn't really tied into the great DCNu.  It's got some bizarro concepts and characters that people really haven't heard of.  But it's all of those things that make these issues so much fun.  Even though it's being cancelled it's worth checking out.

And... no that isn't the Flash guest appearance in issue #11!  It's a fantastic twist on the concept of Dial H For Hero that is spectacular! 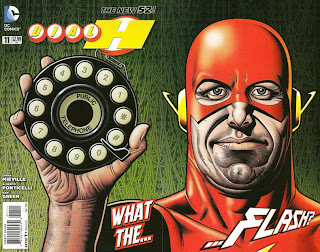