I decided to start the week in review with a review of two new series tied together only by their title, but it was an odd coincidence that book that both had Dream in their titles showed up the same week. Of course we first need to give you the links for next week’s books. The clean list is at Cosmic Comix, my store and the detailed list is at Midtown Comics.

This coming week is a little heavier on the big two. Of course part of that is me filling out a smaller week by picking up and re-trying a book or two.  From DC I’m curious to see Johns end his Green Lantern run, something I feel was long overdue. The real highlight is Batman Inc as we head into the home stretch of Grant Morrison’s epic run on Batman. Looking over my Marvel list I would say the highlight is Daredevil. Mark Waid is going down the Frank Miller path of tearing DD down, let’s see how or if Matt gets back up. The Alternative press has a new Joe Casey book with Bounce #1 and the next issue of his series Sex. Add into that mix the next issue of Mind Mgmt and GI Joe Cobra and even on a light week the alternative press shines brighter. 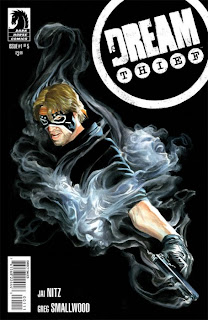 This leads into the reviews and first up is Dream Thief #1 (of 5) by Jai Nitz and Greg Smallwood. I loved this book. The narrative structure of the book made it take me a few pages for me to get into the rhythm of the book. The story is an introduction to the main charter John Lincoln. We get to learn about who he is, are given some clues about how he is turned into the Dream Thief. We also see how much crap these powers leave him in at the end of the first issue. At the same time we are given a supporting cast. The narrative structure that threw me for a few pages was the letter from his father. As we are seeing this story being played out we are also being given snippets of the letter. When we get to the end of the letter we are at the end of the story. Not every page has a passage from the letter, but it was a very cool way to gives some background on John and a possible connection between him and his father.

John is a bastard and probably one of the all time most unlikable leads of all time. At the same time you are drawn into his story. He apparently can’t hold a job, has little remorse about cheating on his girl friend and is willing to get high in the middle of a museum. Somehow after getting high John awakens with the mask on his face and remembers that he had killed his girl friend. From there things get worse. Truly a fascinating start to a series as the ending is even more f**ked up then him killing his girl friend. I recognized Nitz’s name from other work at DC and elsewhere but this is the first book that made me stand up and take notice of his writing.

The artist, Greg Smallwood is someone who was unfamiliar to me. I was pleasantly surprised. Greg’s work is very professional, all the characters are distinctive, emotions are played out well and page designs are great and very innovative. It appears John is possessed by people and acting out what they want done. As John is in midst of doing these thing we see both John and the party in charge portrayed in a very cool fashion. Since we have no coloring credits I will assume is was also Greg’s work and the muted noir palette was a great choice Next up is The Dream Merchant #1 by Nathan Edmondson and Konstantin Novosadov. I like Nathan’s work on “Who is Jake Ellis”, The Activity and Dancer. Hell even Grifter at DC was okay, but Nathan and DC did not last long together. Based on DC’s track record I’m putting that on DC. So it was based on Nathan’s work that I give Dream Merchant a chance. I’m ambivalent about this series. That means I need to read another issue or maybe two before I make a final judgment call.

Our main character is Winslow, who seems to prefer living in his dreams. So much so that he is locked up in a mental institution. We find out that he appears to be connected to another reality and that other reality has sent ghost like agents after him. Winslow also meets up with a mysterious character that is dressed almost exactly like the bad guys, except he is trying to help Winslow. Mixed up in Winslow’s adventures is Anne, a young woman who had befriended him at the mental hospital. I know at this point Winslow and the reader are not supposed to understand what is happening. Still the book was too confusing at times and has not engaged me enough to be truly looking forward to the next issue.

A big part of the problem is the art. Konstantin’s style is very loose, light lined and almost borderline cartoon style. It certainly has an ethereal feel to it, which enhances the “dream” idea of the story itself, but it likes any real snap or pizzazz. Also his inability to make the bad guys and the possible mentor for Winslow look distinct enough was a problem.

Leave it on the stands.