So DC continues to just be an unending fountain of bad news. James Robinson walks away this week as the news of four more cancellations are released.  What hurts DC even more is that they have nothing exciting on the horizon. The idea of not launching new series every month or so and the obsession with having just 52 titles makes DC dull. I no longer even review the DC solicitations. There is no point; it is the same old titles. Nothing cool is coming out in collected editions and Vertigo is a shadow of itself. The talent that has been chased away in the last two years includes Nathan Edmondson, Joshua Fialkov, Andy Diggle, George Perez (seems to have disappeared too) and James Robinson. Scott Lobdell is the backbone of the Superman franchise and Scott Snyder is their one star.

Not that Marvel does have issues. Marvel is killing all their smaller titles like Red She Hulk, Moribus and others since readers (even me) can only buy so many books and the 24 or whatever issues a month of the big “X” books and Avengers books means other have to be cut. Still it seems that all of this corporate interference is having a positive effect on the alternative press as we have tons of great titles coming out from Image, Dark Horse, Dynamite, Valiant and IDW.

Okay now it is time to go onto the reviews. 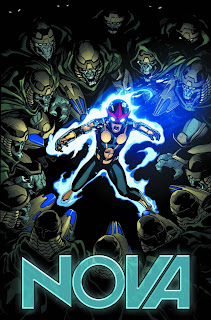 Nova #4 was a fun issue. I’m still having an issue dealing with Sam looking like he is 12, when in reality he is a high school student and around 16/17 based on the established time line. Also I’m not a huge McGuiness fan, so while many fans are dreading the impending new creative team shift with issue #6, I’m looking forward to it. The base story line is Sam retrieves the Ultimate Nullifier from the bad guys. One of the bad guys is an ex-Nova who says Sam’s father betrayed the corps. It all feels more like set-up then anything else. Big bold panels, rapid fire action and adventure, It all feels a little on the light side, especially for $4.

Iron Man #10 was trash. Howard Stark runs an Ocean’s Eleven caper to save the Recorder who apparently has information he can use to save his unborn child (Tony). Retro-conning is the name of the game in this arc. Gillen’s super hero work continues to miss the mark for me. It has my curiosity to see where this is going and based on the last line that Tony has many “parents” I’m guessing a Gattaca type of thing (yawn). 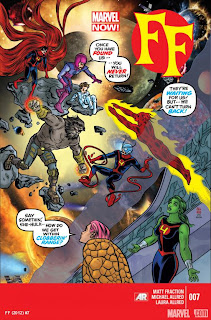 FF #7 was terrific. Fraction and Allred make this strange mix of characters work. A new Frightful Four of sorts in battle with the new FF, of course one member is on both teams. The Wizard is attempting to build his own family with Bentley-23 and has Medusa under some sort of mind control. Blastarr is the fourth in the Wizard’s group and the battle does not go well for the good guys until Bentley-23 comes to rescue. I love how Matt tied it all together with Bentley sending Blastarr to the end of time which places him into the Fantastic Four story line. It was not a question I had while reading the Fantastic Four, but it was a great tie-in. The only thing that threw me at all was seeing the old Human Torch on the cover and not in the book. I’m worried about this series because it is so odd and strange that I’m guessing sales on this thing are not good. I would hate to see it get cancelled. The problem with Marvel and DC is they push the straight super hero stuff so hard that these books often get lost in the shuffle. I rather pay $4 for this book without a digital download if it meant keeping it from being cancelled.

Age of Ultron #8 was fun as a  “What If”, Elseworlds, Alternative timeline story. The problem is I can’t get invested in it at all since I know it is all short lived. I’m curious to see where this goes and what impact (illusion of change) Marvel will draw from this series. It all seems so ethereal. Even worse some of the characters make no sense at all as why they ended up being the way they are just due to Hank Pym being killed by Wolverine. I just hope I can get some $$ back when I sell the series on Ebay. 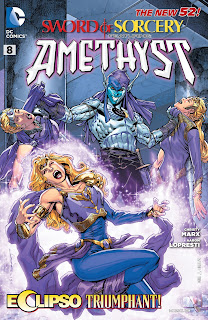 Sword of Sorcery #8 is the final issue and they wrap it up pretty well. Aaron Lopresti’s art on this series was well done and a big reason to buy the book. Slowly I was starting to get into this Game of Thrones type saga being played out in Gemworld. It was almost being written as a pre-teen type of story (think Hunger Games). Of course DC screwed it up by tying it into the new DCU with Heckblazer, made into a $4 comic to add in a back up story unrelated to the main story. It was a recipe for an eight issue run to cancellation. DC gets credit for trying to keep a mix of genres out there, but loses points for making it a $4 book and not marketing it any true fashion.

Skip it, it’s over and was only okay anyway.

Cable and X-Force #8 was a very good book. This caper played out much better then the first one and the plan worked, although with some major problems. Cable’s future vision sees Earth being ravaged with millions killed as alien races come to claim the brutal alien villain SWORD has in their control. Of course you can’t prove the future so Cable’s band is viewed as outlaws for breaking the evil alien out of custody. Cable convinces Agent Brand to help him save his crew and shows her how the alien bad guy was set up to be killed. After the Cable’s team is saved and the bad guy is killed Cable betrays Brand and takes off. The logic of the story is superb. You just need to accept the premise that Cable’s visions are correct unless he changes what is going to happen. The action is great and the art by Salvador Larroca is rock solid. This book has made me appreciate Dennis Hopeless as a skilled writer. 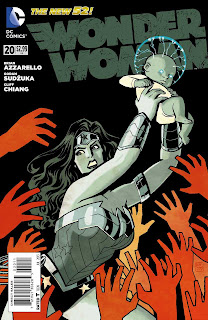 Wonder Woman #20 by Brian Azzarello, Cliff Chang and Goran Sudzuka continues to be one of the best books from DC. This book occurred due to the new DCU, but in reality this book could have come out under any era. Azzarello has made this series its own thing. Wonder Woman is striving to protect Zeke (Zeus last child) with her misfit band against the forces of Apollo the new King of the Gods. We also have the First Born getting into the act as fighting and strategy is being played out on multiple fronts. I keep worrying that someone at DC will screw this up. I could be wrong but I believe Matt Idelson (a DC Group Editor) is protecting this book from the higher ups. I believe Matt is also responsible for recruiting a lot of the new voices into DC.

Next up is Part 3, covering the alternative press books, come back Tuesday 7AM (US East Coast Time).
Posted by Jim at Monday, May 20, 2013