Indie Previews for July Part 2 of 3

Thomm and I are still going strong...

Avatar Press Inc
Absolution Rubicon #1 by (w) Christos N. Gage (a/c) Daniel Gete
Christos Gage takes his network television hardboiled crime sensibilities back to the violent world he created to reveal the fate of police superhero turned vigilante, John Dusk. With Dusk's fall from grace, every scumbag lawyer in the city is leading the charge to have the criminals he put away released from prison. But the thugs are finding that life behind bars is safer than facing Dusk's brand of permanent justice on the streets. As the body count increases, the former friends and loves in Dusk's life face the difficult challenge of trying to bring in one of their own. With a bounty on his head and pressure mounting for his arrest, the authorities take an insane chance by unleashing an unstoppable maniac to take him down. But sometimes the cure can be far worse than the disease. 32 pgs, FC, $3.99
Lee: In case you missed, or don’t remember, the first series back in 2009, this is very much a ‘what if Green Lantern started killing people’ story. The first series was better than average and suffered from poor art. This will be entertaining so I’m not worried about that but I hope the art is better.
Thomm: Has there been a change in artist? I don’t know. I wonder about the need to bring in the maniac. Green Lantern isn’t super powered or invulnerable. His power stems from his ring. Just shoot him in the head when he’s not paying attention. How hard can that be?Lee:   Original art was by Roberto Viacava so the artist has changed.  I still don't know who Gete is so that part is definitely a crap shoot.  Ok, with a little looking, Gete worked on Blue Water Comics Logan's Run, you can see previews of his art for that series here. 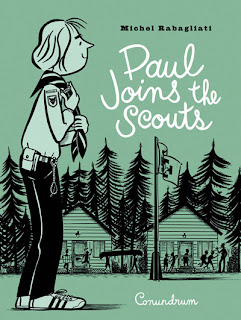 Conundrum Press
Paul Joins the Scouts GN by (w/a/c) Michel Rabagliati
It's 1970 and Paul's family watches the news with anxiety as bombs are going off around Montreal. But Paul is more interested in flying his kite, comics, and his first kiss. Soon Paul joins the scouts and heads off to camp. Things take a turn when the troop gets mixed up in the terrifying events of the FLQ crisis. Paul Joins the Scouts is a coming of age story which takes an historical approach to both the Baden Powell scouting movement and the October Crisis, but humanizes these incidents for both a YA and adult audience in a way that is original, sincere, and captivating. 160 pgs, B-W, 7.5x10, $20.00
Lee: The Paul series is nothing short of amazing. Paul, as far as I can tell, is Rabagliati in comic book form. His stories are stories about growing up, and finding yourself, and finding love, and raising children, and even dealing with the death of parents. This particular book isnt’ all of that but Rabagliati has a way of making life enjoyable and reading about it even moreso.
Thomm: I’m looking forward to this. I know little about Montreal in 1970, other than that they were getting ready for the Olympics in 6 years. Lots of new stuff to learn for me. I can say I think I’ve spotted a flaw in the endeavor to get a first kiss. Joining the scouts would make that more difficult to accomplish.Lee: This is more Euro style Scouts.  The Scouts in other countries is a co-ed function so it makes sense if you know that. 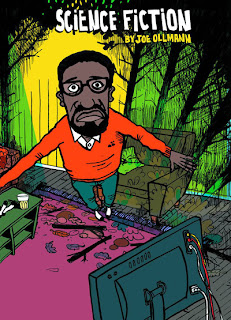 Science Fiction GN by (w/a/C) Joe Ollman
When high school science teacher and pragmatic realist Mark is inexplicably drawn to renting a cheesy sci-fi flick, it sets in motion a chain of events that makes him rethink everything he has ever believed. After a hysterical breakdown while watching the movie, he reveals to Sue, his longtime girlfriend, that he suddenly remembers being abducted as a child - by aliens. He becomes obsessed with alien-abduction chat rooms and as he becomes more heavily immersed in his inner world, their relationship slowly disintegrates. All he wants is for her to believe him. But how can she believe him, when it's just science fiction after all? 128 pgs, PC, 6.75x10, $18.00
Lee: I saw this. I read the hype. I realized this was my buddy Thomm! Except for the lead character being black… this really could be about Thomm. You should see the emails he sends Jim and I. Don’t let that scare ya away, this still looks good.
Thomm: Well, except the part about teaching high school. Or believing aliens have been here. Or knowing how to get in a chat room. Come to think of it, I’m more the girlfriend who thinks he’s nuts and Lee and Jim are Mark. Everything’s all twisted around. 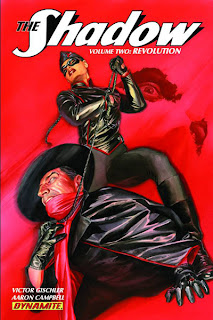 Dynamite
Shadow Vol. 02: Revolution SC by (w) Victor Gischler (a) Aaron Campbell
When his mystic powers fail, The Shadow travels the globe on a bloody search for answers. He attempts to reconnect with his spiritual masters in Nepal, but is sidetracked by an opium smuggling operation. Afterwards, he travels to the frontlines of the Spanish Civil War in pursuit of arms dealers and a would-be dictator. Who is the maniacal El Rey, and how will The Shadow dispense justice when he discovers that a former flame serves as his brutal enforcer, the Black Sparrow? Written by hardboiled crime novelist victor Gischler! Collects The Shadow#7-12. 156 pgs, FC, 7x10, $19.99
Lee: The new Shadow series has been great and this is a great way to catch up. I’m not even a Shadow fan and I am liking this series. It has solid art, the stories are self contained, and the best part.. it’s exciting to read! If you had told me I would recommend this a year ago I would have laughed at you. But what can I say, it’s really good.
Thomm: I only have had limited interest in The Shadow over the years, largely based on who was writing. I haven’t read any of this series but might give it a look. I did wonder why The Shadow would even notice someone being a brutal enforcer. Isn’t that what The Shadow is? 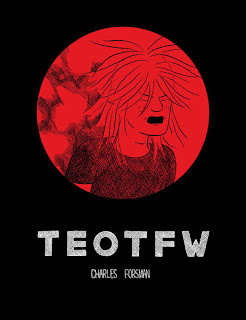 Fantagraphics Books
End of the Fing World GN by (w/a/c) Charles Forsman
The debut graphic novel from Ignatz award winner Charles Forsman is a teen coming-of-age road story equal parts Badlands and Catcher In The Rye. Rendered with a Charles Schulz-inspired deadpan quality and filled with tension, fear and disdain, The End of the F#@ing World is certain to be one of the most talked about graphic novels of 2013. 176 pgs, B-W, 5.5 x 6.5, $19.99 At the bottom there is a 19 page preview, see here.
Lee: So, I had one impression based on the cover and the text and then I read the 19 pg preview. HOLY CRAP is this one messed up book. The characters are complete whack jobs and I mean that in the best of ways. They are creepy and scary and so lost its perfect. And, the reference to Charlie Brown art is spot on. This went from maybe to must have in one very short read.
Thomm: Well, that’s a curious list of influences/similarities. I think I’ll have to see this one on the stands to decide. 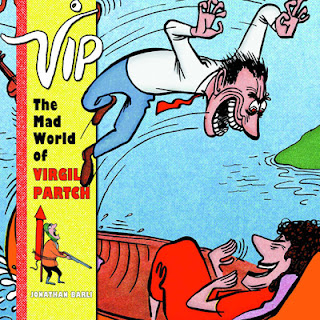 VIP: Mad World of Virgil Partch HC
In the 1940s and 50s, influential comic genius Virgil Partch ushered in the Mad Men era of the gag cartoon-zany, boozy, sexy, sometimes surreal and always hilarious. VIP: The Mad World of Virgil Partch is the first time Partch's life and career has been examined in full, collecting artwork from the entire range of his career and featuring his own writings. A beautiful coffee-table volume. 240 pgs, PC, 9 x 12, $39.99. Art samples here.
Lee: You can good Partch and find dozens of web sites dedicated to Partch. I can see the influence of his style in so many things from animation to comics and I bet this is a ton of fun. I am on the edge thought because I am not sure I need another coffee table book. But it’s a fabulous collection. But I would need to re-inforce my coffee table. But it’s sooo nice.
Thomm: While Lee Dithers, I’ll give a firm no. Pretty, but not so pretty I have to have it. 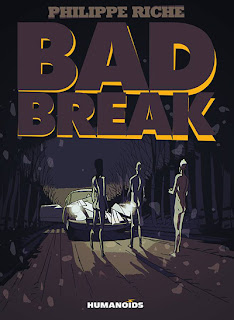