Indie Previews for July Part 1 of 3

Lee: This is an odd month. Usually all the publishers have 1 really good book so there’s a lot of variety. This month, it seems like everyone is releasing 2 or 3 good books which means a couple of publishers are going to get rich off me this month.
Thomm: Rich off you? What’s that mean in terms of their revenues from Jim? You could keep one small company afloat all year with what he spends. 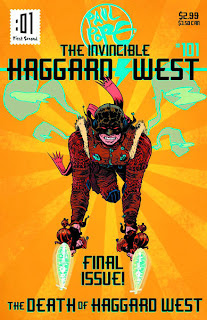 :01 First Second
Death of Haggard West One-Shot by (w/a/c) Paul Pope
This one-shot comic reprises scenes from the beginning of Battling Boy by Paul Pope. It presents the death of Haggard West, a vigilante-style superhero who protected the monster-ridden world of Arcolpolis before Battling Boy arrived to rid the planet of monster once and for all. The Death of Haggard West is a 32-page one-shot limited edition pamphlet comic with exclusive material (illustration and original cover) from Battling Boy author-illustrator Paul Pope. 32 pgs, FC, 7x10, $2.99
Lee: This is all about Paul Pope. There are few creators that I will buy no matter what it is they are putting out there, but Pope is one of them. I am sure this will be both surreal and fantastic. It’s always good.
Thomm: Good price, too. I don’t know anything about this creation of Pope’s but he’s reliably good. 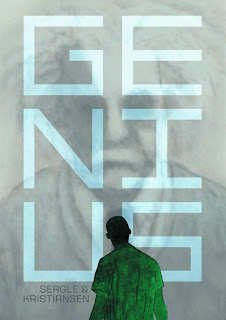 Genius GN by (w) Steven T. Seagle (a/c) Teddy H. Kristiansen
Ted Marx works hard at his career as a quantum physicist. But lately the demands of his job have begun to overwhelm him. Then Ted makes a startling discovery: his wife's father once knew Einstein and claims that Einstein entrusted to him a final, devastating secret, a secret even more profound and shattering than the work that led to the first atom bombs. If Ted can convince his father-in-law to tell him what Einstein had to say, his job will be safe. But does he dare reveal Einstein's most dangerous secret to those who might exploit it? 128 pgs, FC, 6x9, $17.99
Lee: The team behind the excellent House of Mystery series is back! Once again, I am convinced this will be good. Between the creators involved, and :01 First Second’s track record of solid books this is an easy winner.
Thomm: I wasn’t as thrilled by their House of Mystery as you appear to have been. It wasn’t bad but wasn’t something I’m going to keep, either. I’m a little iffy on the premise of this book, too. Keeping something scientific secret? If it stems from any already known science, it’s going to be found sooner or later by someone. Happens all the time. 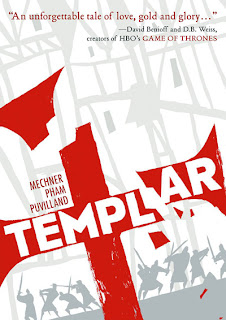 Templar GN by (w) Jordan Mechner (a/c) LeUyen Pham
Martin is one of a handful of Templar Knights to escape when the king of France and the pope conspire to destroy the noble order. The pope and king aim to frame the Templars for heresy, execute all of them, and make off with their legendary treasure. That's the plan, anyway, but Martin and several other surviving knights mount a counter-campaign to regain the lost treasure of the Knights Templar. This volume includes Solomon's Thieves and the two unpublished chapters of the Templar trilogy to complete the saga. 480 pgs, FC, 6x9, $39.99 See preview pages here.
Lee: Like I said, :01 First Second has track record of solid books and I am sure this will be good. The only problem is the fact this is the 3rd good book from them this month. I hate giving all of my money to just one publisher so this might not make the cut. But it is very, very tempting.
Thomm: This is the one that’s most likely to make my cut. It’s a tome and it’s a topic I like. I love infighting in holier than though groups, especially when it’s historically based. 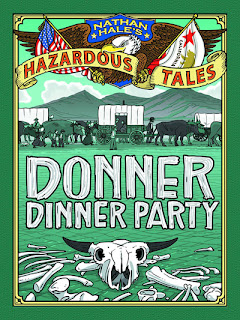 Abrams
Nathan Hale's Hazardous Tales Vol. 03: Donner Dinner Party GN by (w/a/c) Nathan Hale
The Donner Party expedition is one of the most notorious stories in all of American history, but it's also a fascinating snapshot of the westward expansion of the US. From the preparation for the journey to each leg of the trip, this book shows the specific bad decisions that lead to the party's predicament in the Sierra Nevadas. Hale focuses on the Reed family (all of the children in this family survive), and their father, James Reed, is a central figure in the story. It's hazardous, it's got a lot of funny moments, it's got kids in central roles - and it's America's favorite gruesome horror-history story. 128 pgs, PC, 5.5x7.5, $12.95 Visit the artist here.
Lee: Every month we seem to get a good “historical fiction” or “autobiographical” offering and this month is no exception. The only difference, the ending of this story is really, really gruesome. Actually, it’s kinda like the Titanic with an added element of cannibalism. The interesting aspect will be if Hale’s art, which is very cartoony, will temper some of the gorey aspects of the story.
Thomm: Ah, but how many lives did they give for their country? Sorry, couldn’t resist. I’m guessing there was no chianti with the meal. Yeah, it’s bad references month. Gotta balance the good books you’ve found. 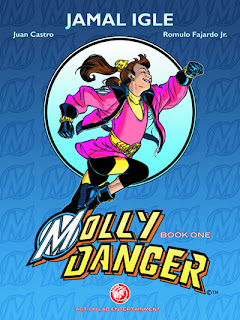 Action Lab Entertainment
Molly Danger Book 01 HC by (w/a) Jamal Igle
She's the hero you've been waiting for! Eternally child-like and inhumanly strong, Molly Danger has protected the citizens of the once sleepy town of Coopersville, New York for the past 20 years from the terror of the sinister Supermechs. But what secrets from her past threaten to destroy everything she holds dear when new D.A.R.T. recruit Austin Briggs becomes her pilot? Written and drawn by Inkpot award winner Jamal Igle (Supergirl, KISS, G.I. Joe). 48 pgs, FC, 9x12, $19.99
Lee: As my daughter gets older it gets more difficult to find books that are old enough, but not tween-age slut fests. If you have girls that are sub-14 you know what I am talking about. Anyway, this looks to be a perfect addition to her book shelf. Then again, if I get this for Girl, what would I get for Boy? Maybe he would like Donner Dinner Party! It’s got everything that boys like in a story.
Thomm: I’ll have to pass on any input for this one. My daughter is 14 but she’s a mini-me, so the typically girly isn’t really her thing. Well, she does have her boy band fixation, but otherwise… 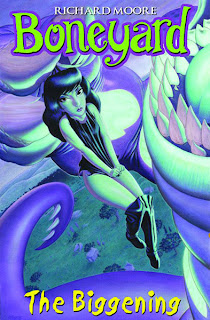 Antarctic Press
Boneyard: The Beginning #1 by (w/a/c) Richard Moore
Hey! Have you heard the news? BONEYARD IS BACK! And in a special, oversize issue, no less! Feeling inadequate next to Abbey's previous loves, Paris does what anyone would do: buy a self-improvement potion from Glump. How could that go wrong? Also, Abbey in a black mini-dress and thigh-high leather boots. We probably should've led with that. 32 pgs, B-W, $3.99
Lee: Boneyard was such a good series I am very, very happy to see it back. Richard Moore is one of the great writers/artists who has never moved up to the big leagues. I like to think that’s a conscious decision and not because he’s overlooked. Needless to say, this is awesome and you can’t go wrong. Highly recommended.
Thomm: I didn’t read the series previously, but this does look very entertaining. Kinda the slutfest you were trying to avoid, but I guess that only applies to young girls as readers. Sluts away for adult men like us. 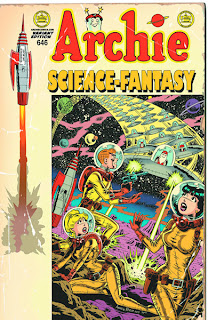 Archie Comic Publications
Archie #646 (Pepoy variant) Cover by Andrew Pepoy
Archie may be a klutz on Earth, but how much damage can he do if there's no gravity? A lot, apparently! Ever wonder what it would be like if Archie and the gang were out of their element - waaayyy out of their element? Well now you can find out what it would be like if the pals 'n' gals of Riverdale lived far, far away from home-all the way on Mars! From intergalactic travel and futuristic space fashion to Archie getting to school on time, it turns out that good ol' loveable Archie is pretty much the same, near or far. Buckle up for a wild, out-of-this-world ride (literally!) in A Really Hot Date! Features an outer-space EC-inspired cover with an impressive glow in the dark 5th color! 48 pgs, FC, $3.99
Lee: There are lots and lots of EC knock off covers out there but few are as good as this. I just wanted to point it out.
Thomm: I wouldn’t have put EC and Archie together and still am not sure I want to. I do wonder how this differs, story wise, from Josie and the Pussycats. Wasn’t that essentially the same thing from the same publisher?
Part 2 tomorrow...
Posted by Lee at Wednesday, May 15, 2013