Lee: IDW is a strange mix of single issues and tpb’s this month. The last couple of months haven’t really thrilled me so I’m going in with limited expectations.
Thomm: I’m hit and miss with purchases from IDW. They have one series I follow but most of what I see is licensed stuff that’s not of interest. 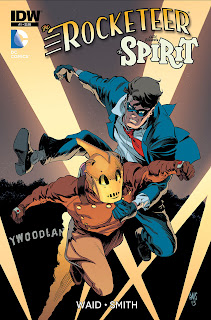 The Rocketeer/The Spirit: Pulp Friction! #1 (of 4)Mark Waid (w) • Paul Smith (a / c)
The Spirit, created by Will Eisner, and The Rocketeer, created by Dave Stevens, are two of the most beloved characters in the history of comics. Now, these two great pulp-inspired heroes meet for the very first time! A Central City Councilman disappears and is found dead in Los Angeles. Commissioner Dolan, along with Denny Colt (AKA The Spirit) and his daughter Ellen in tow, treks out to the City of Angels to investigate. Meanwhile, Cliff Secord (The Rocketeer) consoles his sweetheart Betty… who is traumatized after accidentally discovering the politician’s body!  FC • 32 pages • $3.99
Lee: Doesn’t DC own the rights to the Spirit? I mean, DC was publishing the series just a couple of years ago so it’s strange to see it here. Anyway, the team up makes complete sense and with Waid writing I am sure this will be entertaining.Thomm: My first thought was that this would have been great, if Stevens and Eisner were alive to have done it, but having Waid do it is probably the next best thing. Looks like something I can add to my IDW reading. 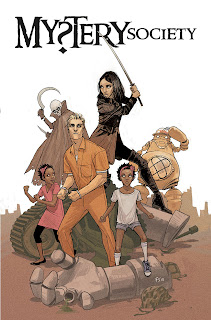 Mystery Society Deluxe HC
Steve Niles (w) • Fiona Staples, Andrew Ritchie (a) • Fiona Staples (c)
Together, Nick and Anastasia–husband and wife–are the Mystery Society. They are rich, resourceful, refined, and determined to uncover the paranormal secrets of the world's underbelly… and in need of new recruits. Their first case: finding the missing skull of Edgar Allan Poe. In the 2013 Special, our outlandish heroes plumb the depths of the ocean to carry out an exchange with an eccentric collector who isn't what he seems. HC • FC • $27.99 • 152 pages • 7" x 11"
Lee: I seem to remember this being just ok when it came out in 2010. These days, the draw is Fiona Staples of Saga fame. Granted this is her early material but I’m confident it will look very, very pretty.
Thomm: Yeah, I have to agree that Staples is the reason to check on this. Might be something I look for on sale.

LOAC Essentials, Vol. 3: Polly and Her Pals 1933
Cliff Sterrett (w / a / c)
By the early 1930s Cliff Sterrett had transformed Polly and Her Pals into the world's premier surrealistic comic strip. Sterrett's Sunday pages (also being published by The Library of American Comics) have long been hailed as individual masterpieces, but his daily strips—due to their rarity—have eluded archivists for the past ninety years. The strips reprinted here—the complete year of 1933 dailies—show Sterrett at his most inventive. HC • B&W • $24.99 • 336 pages • 11.5" x 4.25"
Lee: This is just fantastic! Sterrett was a master draftsman and his dailies were excellent. His Sundays were mind blowing! It’s strange. It’s eclectic. It’s pure art bliss. And, the jokes are still good. This is well worth the investment.
Thomm: I’ll take your word for it. I just wondered how much competition there was for the title of premier surrealistic comic strip. Talk about niche. 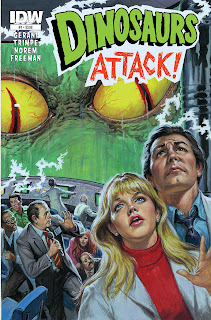 Dinosaurs Attack #1 (of 5)
Gary Gerani (w) • Herb Trimpe / Earl Norem (a) • Norem (c)
They're BACK! 25 years after Topps' original DINOSAURS ATTACKS! trading cards took a bite out of candy counter sales, the original Eclipse graphic novel written by DA creator Gary Gerani returns, this time released in its entirety! With pencils by Herb (G.I. JOE) Trimpe and paintings by veteran illustrator Earl Norem, the entire story will be released as five comic books, with all the blood-curdling trimmings. So put world-conquering Martians aside for a bit and relish the time-tilted melodrama and wild humor of DINOSAURS ATTACK! -- the ultimate nightmare is now a reality from IDW! FC • 32 pages • $3.99
Lee: I really have no clue what to make of this. Norem is a fantastic painter but Trimpe was at the tail end of his stellar art days when this was published in ’91. Not to mention I have no cluewho Gerani is! It sounds like it could be interesting in a generic dinosaurs eat everyone way but I need to see it before I commit.
Thomm: Sounds a bit Mars Attacks! to me, but maybe that’s because the blurb mentions Mars. As you noted, there’s not a lot of draw here. I’ll pass. 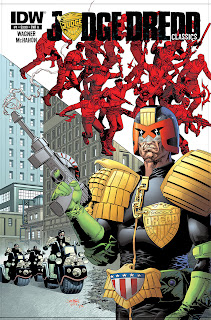 Judge Dredd Classics #1
John Wagner, Alan Grant (w) • Mike McMahon, Ron Smith (a) • Jim Fern (c)
Re-presenting classic Judge Dredd tales monthly, with all-new colors by Charlie Kirchoff! Up first, 30 pages of "Block Mania," with all-new colors which will lead to the beloved Apocalypse War! FC • 32 pages • $3.99
Lee: I would make a snarky comment about people reprinting the same JD stories over and over and over again but Marvel does it with the FF and all the other heroes too. Anyway, the best thing about this is the price. It’s a cheap way to see some classic JD in case you’ve never read it. It doesn’t hurt that it’s in color. I’m passing because I think I already have this 2 or 3 times in the collection. I don’t need more.
Thomm: Maybe I’d like it better starting at the beginning. This is more for me than you because my reading of the title has been sporadic at best. 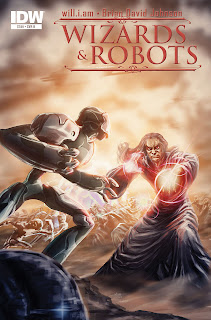 Wizards & Robots One-Shot
will.i.am, Brian David Johnson (w) • Adam Archer (a) • Archer, menton3 (c)
A futuristic army of mysterious Robots embarks on a quest to the distant past in search of powerful Wizards. Though their motives are unclear, nothing will get in their way! Traveling through time and space, Grammy Award Winner will.i.am and globetrotting futurist Brian David Johnson uncover the secrets between these two unlikely rivals and how their war could destroy the Earth! FC • 48 pages • $7.99 Visit Adam Archer here.
Lee: Let’s be honest, the premise sounds stoooo-pid. Wizards and Robots? What are we, 12 again? Anyway, it’s all gonna come down to how well will.i.am can plot. All of the musicians come writers stuff has been very hit or miss so it’s anyone’s guess. As for the art, Archer’s hero stuff reminds me of a cross between Mahnke and McGuiness. It looks great and he seems to have good storytelling chops but is it the right style for this material. It’s all a mystery that will get solved on the stands… as long as my store orders a copy.
Thomm: Vanity projects. Remember when comics were so uncool no one would consider them a vanity project? Now we seem to get one at least monthly. I like will.i.am as an entertainer but I’m not taking an $8 flyer on this. 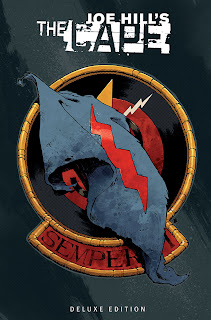 The Cape Deluxe HC
Joe Hill & Jason Ciaramella (w) • Nelson Daniel & Zach Howard (a) • Daniel (c)
Based on a story by award-winning author Joe Hill, The Cape Deluxe brings both dark, powerful comic book series, The Cape and The Cape: 1969, together into one oversized volume. Also features the original prose story by Joe Hill! HC • FC • $34.99 • 246 pages • 7" x 11"
Lee: Didn’t you read this Thomm? I seem to remember this as a series of mini-series that formed a larger story. I just can’t remember how well received it was. I’m gonna trust Thomm on this one.
Thomm: I don’t think I read this one, but it is Joe Hill, so I’m going to give it a better than even chance of being good. I’d be even more favorable if he was the sole writer, but I don’t know anything about Ciaramella.

Lee: Overall this is an ok month. IDW has certainly lost some of its luster but I can’t wait for Polly and Her Pals so that’s good.
Thomm: This was a better month than you led me to expect. I’m looking forward to the Rocketeer/Spirit and will probably check out the Judge Dredd classics. I might check out the early Staples work, but more likely I’d look for it in trade over HC.