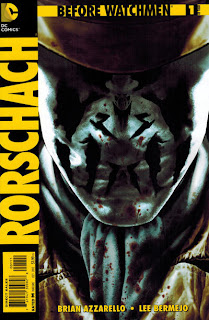 So, I finally got around to finishing the remaining Before Watchmen series. Well, maybe not all because I haven’t read Comedian yet but I don’t have high hopes for that so don’t hold your breath for a review.

But I did have expectations for both Rorschach and Ozymandias. And for the most part those expectations were met. So what did I think? Well read on…

As to be expected the art in this series is absolutely stunning. Bermejo brings a real grittiness to the art that is just perfect for the character and the setting. It’s gritty and grimy just like Rorschach is. The layouts are great. The characters are very distinct. It’s Bermejo at the top of his form. What’s not to like.

And for the most part, I really enjoyed Azzarello’s writing. Between reading this, WW, and 100 Bullets, I have come to the conclusion that, like Bendis, Azzarello only has one dialogue style. As long as you like that style or that style fits the material (crime noir) then it will be great. In this case it’s great. The thing that I did not like were certain plot points.

Rorschach is supposed to be one of the ‘better’ heroes in the Watchmen Universe. He’s almost as brutal as the Comedian. He’s almost as smart as Ozymandias. He’s the bad ass that took out a whole squad of policemen in the original series. Yet, in this book, he gets his ass handed to him by the bad guys not once but TWICE! For a character that is arguably the 3rd strongest hero in the world, believing that he gets beat twice in the span of 4 issues is hard to believe.

And, Watchmen is supposed to be closer to reality than Superman and Batman stories. So, why then does the bad guy not kill him when given the chance? Dr. Doom has captured the FF a million times in a million different death traps instead of just killing them. That’s superhero basics! But the Watchmen isn’t superhero basics and it stretches credibility that the bad guy wouldn’t just kill him.

If you can get past those plot points then you will love this series. For me, it wasn’t that easy. It’s still a very good series but it’s not great. 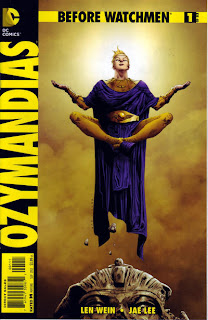 Then there was Ozymandias, written by Len Wein, art by Jae Lee, 6 issues.

The, as expected, is absolutely stunning. Jae Lee does a masterful job of bringing this series to life. It’s incredible. The best part was the page layouts. Lee used a variation of circular panels that is spectacular. But more than that I couldn’t help but feel there was a method to the layouts, or symmetry, or something that I couldn’t figure out. Whatever it was, was excellent.

As for the story, this is a six issue long origin story that in all honesty is kinda boring. Actually, it isn’t kinda boring, it is boring. The first issue is fine. The second issue is fine. But the third issue is the same as the first two, and the fourth the same as all the ones before that. It’s an autobiography of a man who tells you he’s great, and then shows you how great he is, then tells you again, and shows you again, ad infinitum for 6 issues.  If I had read each issue separated by a month, I wouldn't have noticed.  But reading all the issues in one sitting, it can't hide from being the same thing over and over.

Ozymandias is a beautiful book to look at and worth it for that alone. But you only need to read the first three issues to know everything you need to know about the character.

So, all things considered, I am not sure I would say Before Watchmen is a must have in the permanent collection.  The art is fantastic throughout but the stories were predominantly average.  When the author tried to tell a story, like Silk Spectre or Dr. Manhattan then it worked out very well.  When it was just an extended origin story, Ozymandias, then it never got above fine.  I have worse in my collection but I am not sure I need more 'fine' in the collection.